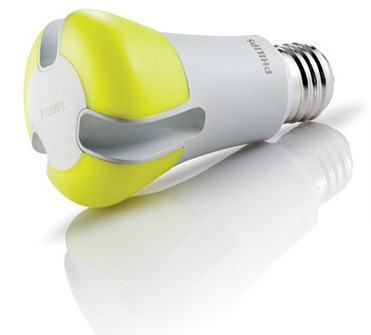 With the expected phase out of incandescent bulbs beginning with the 100 watt bulb at the end of this year, competition is hot for a new wave of energy efficient light bulbs that delivers the shine without the ka-ching of high energy bills.  And a competition with a 10 million dollar prize is exactly what the Department of Energy (DOE) launched to spur the innovation needed to make sure light bulb manufacturers were ready for the challenge.

The DOE just named Philips Lighting as the winner of the Bright Tomorrow Lighting Prize in the 60-watt replacement bulb category. Also known as the L Prize, the competition challenged the lighting industry to develop energy-saving replacements for conventional light bulbs. The L Prize targets the 60-watt bulb because it is one of the most widely used types of light bulbs by consumers, representing roughly half of the domestic incandescent light bulb market.

Philips’ winning product uses solid-state lighting technology, which utilizes light-emitting diodes (LEDs) instead of electrical filaments, plasma, or gas, and has the potential to use far less energy than other lighting technologies. Some of the features of the L Prize entry, such as a yellow phosphor cap that turns white when the bulb is lit, can also be found in Philips’ AmbientLED line of products available now at Home Depot. We highlighted the 12.5-watt AmbientLED A19 bulb available at The Home Depot in our Green Product Guide.

The L Prize-winning 10-watt LED bulb has a useful lifetime of more than 25,000 hours, compared with 1,000 to 3,000 hours for the 60-watt bulbs they are intended to replace. In fact, if every 60-watt incandescent bulb in the U.S. was replaced with Philips’ winning 10-watt bulb, the nation would save about 35 terawatt-hours of electricity or $3.9 billion in one year and avoid 20 million metric tons of carbon emissions.

The winning Philips bulb, which successfully completed 18 months of intensive field, lab and product testing, could arrive in stores early next year.

How to Install a Home Bar, Learn to Safely Attach a Bookshelf to a Wall, Find Out Which Style Light bulb is Best for Your Needs, and More.

How Lightning Rods Keep Your Home Safe, How to Use Energy Efficient Lighting to Cut Electric Bills, Tips on Organizing Clutter and more