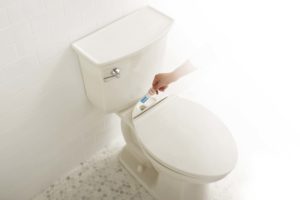 Why One Toilet Sucks Water From Another

Why One Toilet Sucks Water From Another

LESLIE: Now we’ve got Jeff in Iowa on the line who is working on a bathroom-plumbing problem wondering why one toilet sucks water from another. What’s going on?

JEFF: Our house was built in 1978. Still had the same toilets in it as the day it was built, so we decided to upgrade to new, high-efficient toilets. We bought 1.28-per-gallon-flush toilets with a 10 flush rating. And we – our toilets sit back-to-back, basically. The master bedroom has a toilet that sits just behind the toilet in the main bathroom. When you flush the toilet in the main bathroom, it sucks all the water out of the master bedroom toilet. But it doesn’t do it the other way.

TOM: Here’s the problem with why one toilet sucks water from another. You’ve got a venting issue and there’s not enough air getting into the waste line that’s probably feeding both toilets. And so, as a result, when you flush one, you cause a draw on the other that pulls the water out. A lot easier to do when you have only 1¼ gallons of water as opposed to maybe 3 or 4 gallons that it used to have with the older toilet.

So, you need to hire a plumber in to look at this and figure out where the venting has gone wrong. There could be obstruction in the waste line venting. You could get rodents or animals that nest inside vents. But there’s not enough intake air getting into the plumbing system and that’s why you’re getting this sort of suction problem. Whenever you have this condition or if you get – sometimes you get a gurgling when you flush or when you run sinks and water goes down, it’s because there’s not enough air getting into the plumbing system. And that’s going to be what will solve this for you, OK, Jeff?

JEFF: Alright. Thank you very much.

GeneralPlumbingPodcasts Your Calls, Our Answers Podcast

Immerse Yourself In Water-Saving Solutions

Green for less: Water-saving solutions that make dollars and sense

Water Bubbling Up in Sink When Toilet is Flushed

How to Stop Gurgling Sounds From Toilet and Sink

How to Fix a Gurgling Toilet