When to Upgrade Your Electrical Service Panel

When to Upgrade Your Electrical Service Panel

LESLIE: Well, your home’s electrical panel is made up of circuits that provide electricity to your home. You probably never think about it until a circuit trips and you have to. 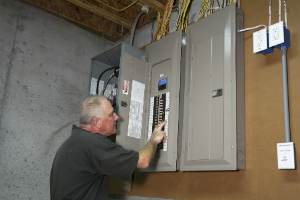 TOM: True. But if you find that happening more often, could it be a sign that you need to upgrade your electrical service panel? Scott Caron is a master electrician and electrical contractor for This Old House and joins us now with five signs your service panel may need an upgrade.

Hi, Scott. Welcome to the program.

LESLIE: A lot of times, I think when people have one circuit breaker trip, they think they need a whole new panel. But that’s not the case, right?

SCOTT: No, it’s definitely not the case. If there’s a circuit that’s giving them a hard time, either the circuit is undersized or it’s tandemmed (ph) onto something else that shouldn’t be.

TOM: And that could be repaired without replacing the entire panel. But there are things that might indicate a panel replacement is due. The first one you suggest is faulty wiring. What do you mean?

SCOTT: Faulty wiring is certainly one of the common causes of residential fires in the United States. There are some signs that you can look at: dimming of the lights or flickering. If you’re getting a shock when you’re near the washing machine or sink, (inaudible at 0:23:11).

SCOTT: Yeah, it’s not good. And obviously, if you’re smelling something burning, after you call the fire department, you call an electrician, see what’s going on with that.

TOM: Now, what if you have a fuse panel? Is that necessarily a bad thing? Does that mean that you need a new circuit breaker panel?

SCOTT: You know, Tom, I’m not against fuses. I really like them. They’ve been around for a long time. When they shut off, they’re off and you call an electrician to find out what the problem is. But they are inconvenient and some insurance companies, they do have some problems with them. But it’s a good time to update because you can’t buy fuse panels anymore and they’re hard to expand with.

TOM: And very often, over the years, folks will put the wrong-size fuse in the panel because 1 fuse – a 15-amp fuse and a 20-amp fuse basically fit in the same size hole, right?

SCOTT: That sounds like you’re talking from experience, Tom. I don’t know where that comes from.

TOM: It comes from 20 years as a professional home inspector removing those fuse-panel doors and looking inside and going, “Oh. Look at that. A number 14-wire on a 20-amp fuse. Not a good thing.”

SCOTT: I could see the pressure there, though, if you’ve got Thanksgiving at your house and something’s not working.

SCOTT: There’s a little bit of pressure to get the lights working but you’re right. They can be interchanged. They came out with some safety fuses later on in the evolution of fuses. But circuit breakers are nice. You can’t mess around with them too much.

TOM: Now, another sign, I think, is when you just see people really trying to stretch that electrical system to the limit. They’re got extensive electrical cords and power strips and the like. Yeah, that might be a sign that you’re just really short on wiring.

SCOTT: Tom, everything has a plug on it these days. Whether it’s a cell phone or – I mean everything. You need a plug for it. And we put a lot of outlets in because of that. But yeah, if you need to expand, you’re going to need to add circuits to it.

TOM: Now, as an electrical contractor, I guess there does come a point where you’re doing all this wiring in the house as it is. Replacing the panel doesn’t really add significantly to the expense at that point.

SCOTT: No. The minimum-size electrical panel is 100 amps that we’re using in houses these days. A more common one is 200. Now, back in the 80s, we used to put 400s in for some of these, I guess, average-size homes but not anymore. Because of all these ENERGY STAR appliances and LED technology with the light bulbs, we’re actually using less power and they’re not as required.

TOM: That’s a good point because that’s another reason that folks would replace their panels: because they were putting in new appliances. But they’re just that more – that much more efficient these days.

SCOTT: Yeah. Sometimes, we’ll take out a 40-amp range and put something in that only uses 20, 25 amps. So, I see it every day. The refrigerators are getting better and those are your two biggest uses of electricity in the house, so …

TOM: And I guess if you are planning on upgrading or renovating your home and you’re doing that work, replacing that panel could be the perfect project to add to that job.

SCOTT: Absolutely. And obviously, it’s an electrician’s job. I have seen some homeowners do it in the past but they …

TOM: Not a good idea.

SCOTT: No. They have somebody working very closely with them. They had to have.

TOM: Scott Caron, the electrical contractor on TV’s This Old House, thank you so much for stopping by The Money Pit.

SCOTT: You got it. It was fun to be here.

Ask Your Electrician for These Outlet Upgrades

How to Run an Underground Electric Wire

How to Trouble Shoot Your Vacuum Cleaner, What You Can Do to Avoid Shower Shock, When is it Time to Upgrade Your Electrical Panel and more

Can an Electric Fuse Box Installed Outside?