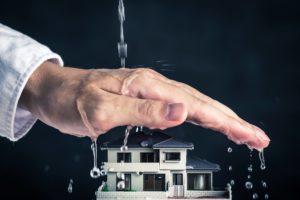 LESLIE: Vincent, you’ve got The Money Pit. How can we help you today? Got a leaky ceiling?

VINCENT: I have got an issue with a leaking ceiling. Not sure if it’s coming from my roof or from my air conditioners. Doesn’t do it all the time but sometimes, when it rains, it comes down. And then other times, when it’s not raining, it comes down. So we’re kind of at a loss.

We’ve got a metal roof on it. It’s an older-structure house.

VINCENT: I’m just thinking maybe the drip edge at the – going where it goes into the gutter and (inaudible). I’ve not had any luck, because I’ll think I have it fixed and then it’ll come – the rain – and it comes in again.

TOM: It comes in again, right.

TOM: So, what have you been doing it to fix it? Have you been sealing the seams in the metal roof?

VINCENT: Yeah. We got up and put some caulking and stuff along where the edges and stuff were. And it’s supposed to be a 20-year roof and we’ve only had it on the house probably about 8 years.

TOM: Well, wait a minute. So if this is a metal roof, it’s supposed to be a 100-year roof. Metal roofs last a long time.

Here’s what I would do. I would try to make it leak. So I would go up there – can you get up there in that area with a hose?

TOM: OK. So I would try to make it leak. So I would try a normal, light-duty rainfall when it falls down from the top and see if that does anything. And then I would try some directional pressure against those seams and see if I can figure out what type of driving rainstorm is coming in here. Because I suspect it is due to the rain driving in on those. And it might be trapped in there and that’s why maybe it comes out days later after a rainfall. I don’t know. But I think what you’re going to have to do is to try to figure out what part of that is breaking down.

And then once you do, if you’ve already gone the caulk route, I would suggest taking apart that section of the roof and then putting it back together with the proper sealants to make sure you get it done once and for all.

TOM: Alright? And that’s the way to approach that.

TOM: Yeah. No, you don’t want to do that until you know you’ve got this leak done. Yeah.

And by the way, when you do repair that ceiling, make sure you use primer on it. Because if you don’t prime over leak stains, they’re going to come right through the finish paint, OK?

VINCENT: Yeah. Actually, I think what we’re going to do is put up a lip siding or a – not a paneling but it’s a plank that’ll go up and get rid of the popcorn that’s up there right now. It’s got a popcorn ceiling.

TOM: Oh, yeah. Well, listen, you know the four most expensive words in home improvement: while you’re at it.

PlumbingPodcasts Your Calls, Our Answers Podcast

How to Find a Roof Leak

Shower Leaks: How to Find and Fix

How to Find and Fix Leaks Fast

How to Hunt Down Drafts

How To Identify and Repair a Plumbing Leak in Vacant House