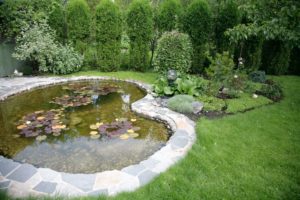 LESLIE: Well, when spring comes around, a combination of snow melt and rain can spell disaster for your basement and your landscaping. 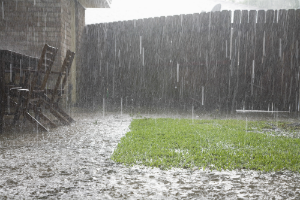 TOM: Yep. And that water can no doubt cause a lot of damage if it goes where it shouldn’t. Here to help us tame that tide is This Old House landscaping expert Roger Cook.

TOM: So, yard drainage is a topic that most folks only deal with when it causes a big problem, like a flood. But it can really impact the life of the landscaping, as well, right?

ROGER: Well, it can affect the whole house. That’s the problem with too much water in the wrong space. And usually it starts with a gutter. All that water comes pouring into the gutter and if for some reason the gutter is clogged, it’s going to run right down the side of the house, end up going down the foundation and either in your house or flooding your plant beds.

TOM: It’s amazing how many severe building problems can be avoided with just a good set of gutters. I saw a beautiful, historic building just yesterday and for some reason, the last time the roof was replaced they decided that they would sort of roof over the built-in gutter. And as a result, the entire foundation, all the mortar was washed out of the brick.

ROGER: It’s amazing what it’ll do. It’ll rot wood quickly when you get too much water in there.

ROGER: But it’s not just getting it down. Once you get it down to the ground in a downspout, you have to figure out where you’re going to send it from the downspout. You need to pitch it away from the house, so either a splash block or a pipe or some physical thing that’ll get that water away from the house.

LESLIE: If you can, is it better to bury that sort of away-spout, for lack of a better term? I’m sure there’s an actual name for it. But once you’ve got the finishing end of the downspout, does it make more sense to put it underground and get it as far away as possible? Or does it really depend on what your grading and your landscaping situation is?

ROGER: Depends on a lot of things. Yes, it’s great if you can get it underground because it’s not visible, no one will trip over it, you don’t have to move it when you mow the lawn. But if it’s underground, it has to either exit to daylight or go to a dry well. Because there’s so much water coming off that roof that you have to make a way for it to come out the end of the pipe.

TOM: Now, let’s talk about drywells because I think that that’s something that a lot of folks build: essentially a hole in the ground, fill it with stone, drop the downspout extension into that. But it really takes an awfully large hole with a lot of stone to not get clogged up and back up again, right?

ROGER: Yes. It’s unbelievable how many gallons of water come off a roof. And to build a big, huge dry well that will compensate that, sometimes we have to put in thousand-gallon dry wells to hold it. But most homeowners will dig a hole and use a plastic dry well. It holds about 50 gallons. You can tier one, two or three of them together. But the secret to the whole thing is, especially with those small dry wells, is having an overflow so that when the water does come in and fill up those smaller tanks, it’ll pop up and let the water out and it has a place to go away from your house.

TOM: Otherwise, you’re just going to back up and pond.

ROGER: It’ll come right out the end of the downspout.

TOM: Let’s talk about more difficult yard-drainage problems to deal with. Let’s say you have a yard that slopes into your building. Perhaps it’s a bit flat when it gets near the foundation but you want to kind of intercept that runoff on the way. Can you construct a drain to do that?

ROGER: You can. You can go all the way around the building and dig a trench. Usually, I dig the trench so that it’s in a V-shape. Now you either use plastic or soil separator, lay it in the trench. And then in the bottom of the trench, I put a perforated pipe and I put stone on top of that, all the way to the surface.

TOM: You mentioned soil separator. What exactly is that? I’ve never heard that term.

ROGER: It’s a landscape fabric. And what it does is keep all the fines (ph) from getting into the stone, which is your main grading-drainage interior.

TOM: Keeps it all flowing.

LESLIE: So, Tom, you had mentioned the term “curtain drain.” But Roger, is there something similar called a French drain? Are they the same? Are they different?

ROGER: I like to think of the curtain drain as being out in the yard intercepting water or taking water from a low point. I think of a French drain as something that’s either just outside or inside the basement of the house and takes the water out away from the house.

TOM: Yeah, that’s a good point. Very often, folks that are trying to solve wet-basement problems will put French drains in where they dig out the interior foundation perimeter of a basement, put in the pipes and the pumps and try to pull the water out. But I always advise that if you stop the water from getting that close to the house to begin with by extending those gutters and intercepting runoff, you really never need to take that step.

ROGER: Well, the other thing with the pump system, the power usually goes out when it’s raining the hardest, right?

ROGER: So then our pump’s not going to pump out any water.

LESLIE: You know, Roger, regardless of what you want to call it or where you put it, these seem like really involved projects. So are there any things that you might suggest as a trick of the trade, maybe a timesaver?

ROGER: Well, there is one new thing that’s come on the market that I haven’t tried yet but I’m looking forward to. And it’s a piece of pipe with foam peanuts around it and then mesh. And it comes with a pipe internally and you just dig out and put them down and snap them together and the whole system’s in place. So it saves a lot of labor.

TOM: Oh. So very cool. So it’s sort of an all-in-one way to create the drain. Instead of putting in the layers of different material, it’s all in one piece.

TOM: Fantastic. Roger Cook, the landscaping contractor on TV’s This Old House, thank you so much for stopping by The Money Pit.

LESLIE: Alright. And you can catch the current season of This Old House and Ask This Old House on PBS. For local listings and step-by-step videos of many common home improvement projects, visit ThisOldHouse.com.

How To Install A French Drain | Video

How to Build a Drywell

Keeping Water Away From Your Home’s Foundatiion