Tom Kraeutler:    This is the Money Pit’s Top Products Podcast coming to you from the 2015 National Hardware Show in Las Vegas, Nevada. Outdoor living is a huge topic here. More folks are getting out, fixing up their houses, improving their curb appeal, and most importantly they’re doing it themselves. 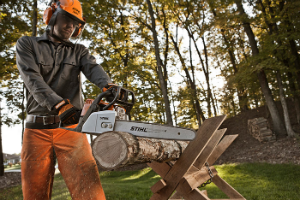 Leslie Segrete:    Yeah, I think it’s really important to know that people want good tools to go along with the projects that they’re doing in their outdoor spaces, so joining us we have Roger Phelps who is the promotional communications manager for Stihl. Welcome.

Roger Phelps:    Thank you very much. Glad to be here.

Roger Phelps:    You know it’s interesting. Yeah, I think what’s happening now is that you’ve got folks who have kind of gone the cheap route and have gotten really kind of discouraged after the two or three tools burn up and …

Roger Phelps:    And especially now, as you said, more and more people are investing in their homes, their yards, and so forth, so yeah we see a definite demand for higher quality tools, and I think it’s all part of that pride in wanting to have the best to do the best.

Leslie Segrete:    I think it’s interesting because Stihl offers a whole variety of gas-powered versus electric. When you’re a home owner, how do you determine which is the best sort of fuel source, if you will, for you?

Roger Phelps:    That’s a great question. As we say, the very best thing you can do is go to a local dealer. Look for some advice.

Roger Phelps:    As you know, we only sell our equipment through servicing dealers because they’ll give you that advice, so get prequalified. Obviously, do your own research but what’s the size of your yard? What’s the extent of the project? How often are you going to be using that tool? Are you going to be tilling that garden once because it’s a vegetable garden? Or is that something you’re going to be doing a lot of. Are you just pruning a tree, or are you actually going to be harvesting trees for lumber and heating your home?

Tom Kraeutler:    Let’s talk about an example of how much run time you can expect. Let’s say you had a tree that fell on your home and it’s maybe 12 to 14 inches in diameter, and you wanted to use a battery-powered saw. What size saw would you use? How long would it work? Could you get rid of that tree in one charge or what are we talking about?

Roger Phelps:    That’s exciting, because the battery technology has improved so much. Obviously we’re running lithium ion now, it doesn’t have the brownouts, it doesn’t set a memory in the battery.

Leslie Segrete:    And it’s not heavy.

Roger Phelps:    It’s not heavy and it recharges quickly. For instance, for our speed charger and the standard, what we would say, the insertable battery, like the AP180. You’re going to recharge that in probably 40 minutes. The run time if you held the trigger down, it’s going to run for 35 minutes.

Leslie Segrete:    But you’re not doing that.

Roger Phelps:    But it’s about how much work that you’re going to get done.

Tom Kraeutler:    Yeah how much are you getting done.

Roger Phelps:    Yeah, a 12 inch tree, you probably could take most of it.

Tom Kraeutler:    You probably could, yeah.

Roger Phelps:    You could probably cut it, prune it, you could go ahead and buck it as we say.

Tom Kraeutler:    Yeah I don’t think I’d have my finger on the trigger for 35 minutes.

Roger Phelps:    That’s kind of funny, because everyone says well what’s the run time? One of the things we’re trying to move people to is, well how much work are you going to get out of it?

Roger Phelps:    What’s the size of the property, for instance, for the battery-power mower? I think the standard urban type plot you can get done on a single charge on our battery mower.

Tom Kraeutler:    Run time is different when you think about a gas-powered chainsaw. You may have that on the entire time you’re working on that tree.

Tom Kraeutler:    But if it’s battery-powered, you’re only going to have it on during the cut.

Roger Phelps:    Right. Absolutely. Of course, as we go to the large projects, then you can move up to something like a backpack battery. For instance, for the hedge trimmer that we have, on a backpack battery, you can run that continuously for eleven hours.

Tom Kraeutler:    That’s interesting. I didn’t know about that.

Tom Kraeutler:    That’s really cool. What are some of your most popular saws with consumers? Let’s start there.

Roger Phelps:    I think on the gas-powered, you’re looking at the MS 170, which is more of the entry-level, very small homes. If you’re just doing light pruning and just cleaning up limbs in the back of your yard, you could move up to the MS 180. You start having some of the comfort features. Some things like the quickstop, or the easy to start, which is a lot less starting force. 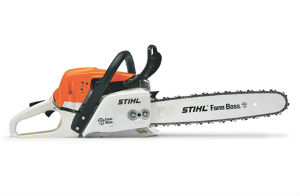 Roger Phelps:    Those are the kind of things. Again, it really goes to, what’s important to you? That’s always that price versus what kind of job you’ve got balancing act that you want to do. Those are probably the most popular. When you start moving up into larger properties then of course things like the MS 271 Wood Boss, or Farm Boss, then you start moving up into larger farm and ranch type models.

Leslie Segrete:    Because you sell specifically at your own dealers, do you find that the level of service to your customers is so much more so if there’s a question about maintenance or service, is that things that you offer within?

Roger Phelps:    Yeah. Just qualify, these are independent businesses, so it’s not a franchisee. But you’re right. They’ll sell our equipment. Yeah I think those types of businesses are modeled with the idea that they’re there to offer more than just the ability to purchase the product. They’re there to help you work through your project or your problem. That’s what excites us and of course, we’re not the cheapest product out there, so it needs a little bit of explanation, a little bit of help to understand why do I want buy that trimmer that might be $100 more than this other one over here. Understanding, as you know, people’s understanding of what quality means has kind of varied.

Roger Phelps:    This idea that okay, yeah that could be the last trimmer you ever buy.

Tom Kraeutler:    Roger Phelps, the promotional communications manager for Stihl Incorporated. Thank you so much for stopping by the Money Pit.

Roger Phelps:    Well, thank you. I appreciate being on board.

Tom Kraeutler:    If you want to check out the latest that Stihl has to offer, go to their website at stihlusa.com. Stihl is spelled S-T-I-H-L USA dot com.

Tips to Keep Ticks Away, Summer Vacation Season Security Advice, How to Pick the Perfect Chainsaw and more

Best Time of Year to Trim a Tree