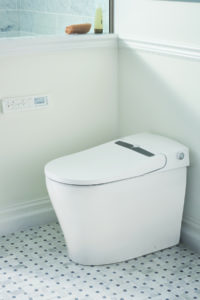 LESLIE: Well, new water-saving toilets truly mean less water but it doesn’t mean less power when you flush, which is what’s important. So here to tell us more about that is Richard Trethewey, the plumbing expert for This Old House.

RICHARD: Hey, guys. How are you?

TOM: We are excellent. We’re flush with excitement (Richard chuckles) to talk with you today about this topic.

RICHARD: Let’s see how many more corny clichés we can throw in there. (all chuckle)

TOM: Well, Richard, we’re talking about low-flow toilets and this is an interesting subject because the plumbing industry and the toilet industry took a real, real black eye over this when the low-flow toilets first came out. You know, we all used to call them the “flush-twice” model because they just didn’t work.

TOM: How has that changed?

RICHARD: Well, the history lesson is where back in the 50s, the toilet used seven gallons every time it flushed. And then by the time the 60s came along, they got to five-and-a-half and then in the 80s, we got to three-and-a-half gallons per flush. And then, in 1995, they passed a mandate that said that you had to cut that in half to 1.6. And the fact is the mandate was ahead of the technology that could figure out how to make solids go down through less water and down into the pipe.

So there was a terrible, terrible stretch there – probably three to five years – where, as you say, you had to flush twice. But I think the manufacturers are pretty much caught up, though, thankfully.

TOM: So how are the new designs different than what they started out being?

RICHARD: Well, I think it’s – not to get too graphic – but it’s the passageways  meaning the – a toilet bowl is molded, you know, out of china and it has to have a integral trap and it has to be such that it’s the right size so that this smaller amount of water can actually create what’s called a siphon so that water can go down and create a siphon. And then thereby once you have a siphon, you can actually pull the solids up and through the trap and down the train.

And so, in the early days, the passageways were too big with less water, so the water just went down and nothing happened; you had to do it. So engineering has caught up to it. I think the fact that the world mandate was such, you know, I think this – manufacturers from all over the planet – there’s an Australian company, Caromo (ph) and TOTO from Japan and some others. And they, I think, led the way and then Kohler and America Standard and all the other American players caught on, I think, pretty good.

LESLIE: Well, being that they’re more efficient, do you have to do anything, you know, more specialized as far as maintenance or pieces that you have to change out over time to keep them working effectively?

RICHARD: No. They’re brutally simple now. I think the trick was – when they first did it, they would say, “Let’s – in the toilet tank, let’s just put a series of bricks or put a couple of dikes on the side,” – these little dams that keep the water from not going down the toilet – and it just didn’t work.

Nowadays, they’ve got it engineered so the tank and bowl work together. And if you look inside, it looks almost as conventional as it always did.

LESLIE: Are they more expensive to buy?

RICHARD: They are. This is a slight premium but that’s the nature of – you know, you pay more for Diet Coke than Coke, I think. You know, by leaving something out –

TOM: We’re talking to Richard Trethewey. He is the plumbing expert; the heating expert. He’s the guy that makes the mechanical systems work on This Old House.

So I guess, Richard, in a lot of your productions, you end up taking out a lot of those very, very historic but large and wasteful toilets in lieu of the more modern and efficient ones. Do you get some pushback from the owners?

RICHARD: Well, on these – on the This Old House projects, we’re generally doing a pretty full renovation so I don’t think that they shed a tear for – to get a new bathroom and stuff like that. I think the place where we’ve actually explored some new technology is on Ask This Old House, the other show that we do, where a couple of times we’ve gone in and looked at these new kits that can retrofit into an older toilet; both a flush valve and a fill valve that could sort of retrofit. And that’s pretty intriguing stuff. It’s not perfect but it does allow you for a $25 part – maybe $50 total parts you could get a fully-rebuilt toilet tank that can use 1.6 where it used to use 3.5.

TOM: And it works a lot better than sticking the brick in it, huh?

TOM: Richard Trethewey from This Old House, thanks so much for stopping by The Money Pit.

You can watch Richard and the entire team on This Old House. Check PBS for local listings or head on over to ThisOldHouse.com. And This Old House is brought to you by Cub Cadet. Cub Cadet – you can’t get any better.

How to Save Water During a Dry Summer

High-efficiency Toilets: Save Money and Water

How to Pick the Perfect Portable Generator, Cut Down on Water Use at Home, Steam Clean Carpeting to Extend Its Life and more