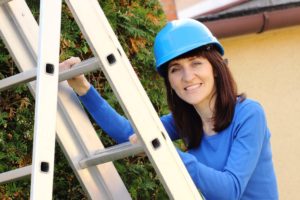 Ladder safety is something we don’t think much about, but we should. This common household tool send to 150,000 DIY’rs to emergency rooms each year and is responsible to thousands of serious injuries. Improperly using a ladder as well as using worn or outdated ladders are the primary reason for the injuries.

To stay safe, make sure your ladder has slip resistant rungs and feet. Inspect it for cracked uprights, split rungs or loose rivets.

When you are using an extension ladder, make sure the bottom is pulled away from the wall by at least one quarter of the height you need to work at. Never stand on the top rung of any type of ladder.  Don’t try to climb a ladder with your arms overloaded. If you have to reach when on the ladder, for proper ladder safety, first move the ladder so that you don’t have to over-extend yourself or your balance.

Although it seems like just common sense and most people take this step for granted, be sure that stepladders are securely spread open and locked.  Also, be aware that electrical shock is possible and dangerous, with both metal or wet wooden ladders.

By taking time for just a few precautionary ladder safety steps, you’ll be on your way to a job safely done.

Preventing Falls at Home: Check for Trip and Fall Hazards