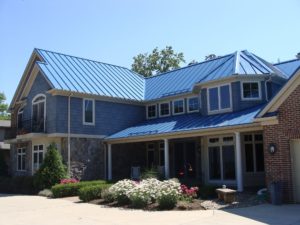 Is a Metal Roof the Right Choice for My Home?

Is a Metal Roof the Right Choice for My Home?

LESLIE: Alright. Next up, we’ve got June on the line with a question about a metal roof.

JUNE: And my daughter tells me she doesn’t think it’s strong enough to hold up a metal roof. And so, I …

TOM: A metal roof is going to weigh not that much more than an asphalt-shingle roof. And if you didn’t put a metal roof on, you’d put a second layer of asphalt on. Then it would be really heavy. So I would tell you to take off the old roof shingles and go ahead and put the metal roof on. I mean it is the most durable roof. It really lasts virtually indefinitely if it’s done right. So, I think it’s a great idea.

JUNE: That’s what I thought.

TOM: And I doubt, very much, that you’re going to have any issues with the strength of the building. If it’s been standing up since 1972, I’d say that it definitely needs a new roof and it certainly should be plenty strong to hold a metal roof. It’s a great choice.

And the metal roof, the finishes today, too, especially in your part of the country where it’s quite warm, they have reflective paint finishes on them. So they actually make the home cooler and it makes it easier to cool in the summertime.

JUNE: Can they leave the old shingles on and just put it over the top of it?

TOM: They can but I do not recommend it. You should always take the old shingles off. It’s a much better job.

TOM: Alright. Good luck. Thanks so much for calling us at 888-MONEY-PIT.

Metal Roof for a Tool Shed

Are Metal Roofs a Good Investment?

Roof Restoration: Which Roof Is Right For You

Installing Metal Roof: Do It Yourself or Ask a Pro?

Can I Install a Metal Roof Over Shingles?