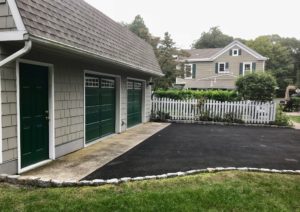 LESLIE: Julianne in Massachusetts, you’ve got The Money Pit. How can we help you today with that gap in concrete?

JULIANNE: For the past several years, have used silicone caulking to fill in a ½-inch gap between the bottom of the back-door sill and the concrete walkway that comes up to it, to keep water and critters from coming through.

JULIANNE: It breaks down very easily, so it needs to be replaced. And it’s such a big gap it really doesn’t hold up well.

JULIANNE: So, I was thinking of using the expandable foam but I was told that is not waterproof.

JULIANNE: And someone else recommended using hydraulic cement to fill in that gap and make a lip there to keep the elements out, so I …

TOM: The sill is the bottom sill of the door? It’s not the – is it the kind of sill that could be removed off of the concrete?

JULIANNE: It’s already off of the concrete but it’s that gap that’s there.

JULIANNE: I’m trying to find out how to fill that in.

TOM: Is it – does it have some give when you step on it, because there’s a gap underneath it? Does it bend and twist at all?

JULIANNE: Not at all. It’s very sturdy.

TOM: So here’s what I would do. I would get some cement – epoxy patching – epoxy repair cement. It’s very adhesive, OK? And it’ll stick to the old concrete surface. Clean out as much as you can of what you’ve put in there before. And then I would very carefully, with a very small trowel – or you may even be able to do this with a putty knife – I would start to pack the underside of that sill with that epoxy patching cement and – until the point where it just starts to squeeze out ever so slightly from the bottom of that sill.

TOM: And then I would just let it harden right in place.

So, two things will happen. You’ll seal the gap and also, you’ll reinforce that open space. Because one of the reasons that the caulk falls out is because caulk is rubbery and it’s just going to bend and flex and tear away. But if you use a solid cement to fill that gap, you’re not going to have this problem anymore.

How to Repair a Concrete Hole | Video

How to Build an Outdoor Bar with Concrete Block | Video

How Can I Fill a Space Between My Patio and Patio Door?

Repairing Cracks in a Concrete Driveway

How to Seal a Cracked Concrete Driveway