How to Select a Stainless Steel Sink

Home » How to Select a Stainless Steel Sink

How to Select a Stainless Steel Sink

LESLIE: Well, stainless steel is an obvious choice for a kitchen sink because it cleans up quickly and it’s got a really great, professional look. But once you get past the key design questions – one bowl or two, undermount or overmount – you 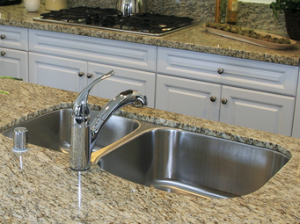 really want to base your buying decision on other, less obvious factors that affect quality and value.

TOM: That’s right. Richard Trethewey is the plumbing-and-heating contractor on TV’s This Old House. He joins us now with tips on how to select stainless-steel sinks.

RICHARD: Nice to be here again.

TOM: So, Richard, I think most consumers believe that all stainless sinks are the same. And in fact, there could be huge qualitative differences. So what do we need to be aware of?

RICHARD: Well, first and foremost, I think you have to think about the gauge of the metal. You’re looking for the strong, silent type, you know?

RICHARD: You want something really strong.

What’s really interesting about metal is you measure it absolutely counterintuitively. The higher the gauge number, the lighter the material. So you tend to think if something was 10, it would be thicker or heavier than something that was 5. So in the case of stainless steel, the lightest gauge is this 22-gauge stuff, which is available and it’s always called the “builder’s model.” It’s the least-expensive stainless steel that you’ll find at the home center or the plumbing-supply place.

But they also come in 18- or 16-gauge. And so, really, my tip to you is get the heaviest gauge and that means the lowest gauge number that you can afford. Heavier is better.

LESLIE: And if you’re washing a big – a large pot that you’ve used to boil pasta in, that gets heavy in your sink.

RICHARD: And you’ll know it, by the way. You’ll know if you move in someplace and it’s 22 gauge. You’ll run that water and it’s just like ting-ting-ting. You hear it. The sound is crazy. Because as you get heavier metal – and oftentimes, some of the better gauge of stainless-steel sink also have applied insulation or sound absorption underneath the bottom. They have a little backer, too, of those rubberized …

RICHARD: Yeah, like an undercoat. Yeah. I can put you into the undercoat for about (inaudible at 0:24:20). And that is unbelievably different. You really – it’s like you want your sink to be like good children: you don’t want to see them, you don’t want to hear them.

RICHARD: That was a W.C. Fields.

LESLIE: So, now, what about your sink depth? I’m always – this is my housekeeping; I’m putting as much in there as possible until I have to stick it in the dishwasher.

RICHARD: That’s right. Yeah. Again, the baseline, if you go for the lowest-cost sink, it’s going to usually be only about a 6-inch depth. That’s really like a …

LESLIE: That is shallow.

RICHARD: I hate to be shallow.

And so, you don’t have a lot of room. For people with really short arms, maybe it’s OK.

RICHARD: Pterodactyls and other dinosaurs. But really, if you see the difference between a 6-inch-deep and the 10-inch-deep, it’s unbelievable. You can put a pot in there and fill it and not worry about the spout fitting over the top of it.

RICHARD: So, I like – deeper is always better and heavier is better.

TOM: Now, we talked about stainless and paying attention to the gauge. But all stainless is not created equal beyond that, correct? The metal itself could be …

RICHARD: Right. Actually, stainless steel is rated according to its content. There’s a lot of things that go into stainless steel. There’s regular steel, there’s chromium, there’s molybdenum, there’s nickel. And those percentages make up its grade. And so the measurement is either 200 series or 300 series. And there’s 306, there’s 316, there’s 316L. There’s all these different recipes.

But what you want to get is at least a 300-series grade of stainless steel. And you’ll know the difference. If you don’t get it, you end up with little pit corrosion you just end up with. Because there’s still steel in it and it’ll rust quickly.

TOM: Now, what about the drains? Any tips on where the drain position should be? And I would imagine if you don’t have a good-quality sink, that drain and the drain connection to the trap is always going to flex. It could be more susceptible to leaks, right?

RICHARD: Yeah, there’s some flexibility. The plumbing connection down below, it can give a little bit and not – it shouldn’t leak readily right away. But you really don’t want it going like a timpani at the bottom where every time somebody touches it, it’s like a drum that’s flexing.

The other thing I should talk about is layouts in the kitchen sinks. You’ve got to really have a discussion with yourself about whether you want to have one bowl over here, another bowl over – and another tiny, little bowl over here for the disposer. I don’t find them to be as functional as having a nice, big, deep bowl. I guess it’s personal preference but a lot of times, people go for the fancy thinking that – “Oh, I’ll do this. I’ll keep dirty ones here and clean ones here and all this stuff.” And there’s something really intuitive about having a nice, clean bowl with one place where everything goes down.

LESLIE: Richard, I imagine you have to be really careful when you’re cleaning stainless. It has a grain to it and you want to sort of protect that and not put your own on it.

RICHARD: You want to clean it but not over-clean it, so to speak. I grew up where we always used the powdered cleaners, like Ajax and Bon Ami. I don’t see them as much as I used to. Now, we see more people using sort of household bleach spray and stuff like that. But what the key is – that you’re not going to take some really aggressive, almost like a sandpaper cleaning – scouring pad and change that beautiful, little patina that was on that stainless steel to begin with.

TOM: So go cautiously and keep that beautiful stainless looking almost as good as the day you put it in.

Richard Trethewey, the plumbing-and-heating contractor on TV’s This Old House, thank you so much for stopping by The Money Pit.

RICHARD: Always great to be here.