How to Maintain an Asphalt Driveway

How to Maintain an Asphalt Driveway

LESLIE: Well, asphalt driveways are the personal roadways of our homes but just like the roads we travel to work, they certainly take a lot of abuse: extreme weather, sun, road salt, you name it. 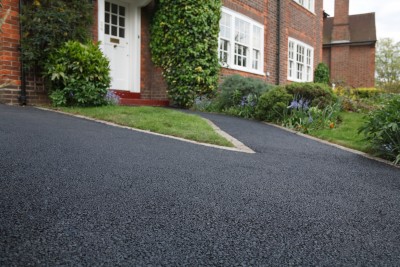 TOM: That’s right. And from cracks to potholes to just general wear and tear, asphalt driveways need regular care to be able to stand up to the test of time. Here to tell us how to do just that is landscaping contractor Roger Cook from TV’s This Old House.

And Roger, this is a project I end up doing about every two years. I’d love to identify a more durable solution to keeping that driveway in good shape. Any ideas?

ROGER: Move. No, it’s an ongoing process because you think about a driveway, it sits out and it bakes all summer long and then it freezes all winter long, so there is going to be some movement in it. And you will get, eventually, hairline cracks and even the pavement itself just needs to be recovered with the oil. The oil will dry out.

TOM: And I think a lot of us assume that our driveways should be just as durable as the roads that we drive on but those roads are built quite different than a driveway. And driveways, there seems to be a wide variety to it in terms of how well they’re built. Some of them are thinner, some of them are thicker, some have a good base, some don’t. And you can tell as time goes on.

ROGER: You sure can. In some cases, you can even get ruts in the driveway where you drive because it’s not good material underneath it. But the key is to save that driveway for as long as you can. It’s thousands of dollars to replace a driveway. It’s a big job that you cannot do yourself as a homeowner. But you can go out and you can fill cracks and you can reseal the driveway and get more life out of it.

LESLIE: So is it better to sort of start with repairing the cracks, potholes, et cetera that you might be noticing in your driveway before you go ahead and reseal it?

ROGER: Yes. Hopefully, it hasn’t gotten to that point when you’re there. You can catch everything early because like anything else, the smaller the crack, the easier it is to seal and keep from getting bigger. And that’s the thing: when a crack opens up in the driveway, water goes in and then it freezes and it opens the crack more, more and more. So we’re – hopefully, we can intervene in that cycle and stop it from ruining the driveway.

TOM: Now, what about the low spots or the sort of the mini-potholes? Is there a patching product you can use for those?

ROGER: There is. There’s a couple of them. One is a very – type that can go on very thin. But a lot of time, with those potholes, you really have to dig out and excavate and then use a different product which is good for 2 inches of compaction.

TOM: And that’s more like a stone, kind of blacktop patch sort of product, right?

ROGER: Yeah, it’s literally the stuff you see them using on the street again. And then, what you would do is after you patch that area, you should reseal the whole driveway. Because otherwise, you’re going to have little black spots all over the place.

LESLIE: And that’s really a project that you need to have enough materials start to finish; you don’t want to stop midway.

LESLIE: So how do you know that you’re getting enough for the job?

ROGER: You buy that product in a 5-gallon bucket. It usually weighs about 55 pounds. Now, that bucket usually covers 300 to 400 feet. So you can get pretty close, boy, using that amount, because there’s nothing worse than getting halfway through the job and not having enough to finish. If you get an extra bucket, you can always return it. There’s nothing worse than trying to run down while the other stuff is drying and grab a bucket and get back in time to blend it all together.

ROGER: I’ve been with the solvent-based ones and had good luck with those. The key, I think, is to use one of the squeegee-type brushes they have to put it on with and get a nice, even coat.

TOM: Right. And those are inexpensive, so you pretty much can – one use and throw it away, right?

ROGER: They’re really not good for anything after you have them spreading that …

TOM: Yeah. You don’t want to have to clean those, right?

LESLIE: And wear good, protective clothing covers, because it does not come off of anything. I’ve got some work boots to show that it’s never going to go away.

ROGER: And do not walk in the house afterwards without inspecting the shoes, because you don’t think you have any on you and you go walking across the kitchen floor and someone will bring to your attention that you will be cleaning the floor.

Now, what if the driveway is just structurally deteriorated? Is there a point where it makes sense to have another layer added to it or just to take it completely down and start from scratch?

ROGER: You know, if you put a layer on top of it, it’s still bad underneath.

ROGER: And eventually, it’s going to fail. So it’s the economics of is – it’s less expensive to just put a layer over the top than obviously it is to come and rip out what you have, take away a foot of material, put a foot of gravel, compact it and then come back and re-asphalt the driveway.

TOM: Good advice. Roger Cook from TV’s This Old House, thanks so much for stopping by The Money Pit.

LESLIE: Alright. You can catch the current season of This Old House and Ask This Old House on PBS. For your local listings and a step-by-step video on how you can repair your driveway, visit ThisOldHouse.com.

TOM: And Ask This Old House is brought to you by Stanley. Stanley, make something great.

How to Fix a Concrete Walkway

How to Build a Walkway

How to Restore an Asphalt Driveway