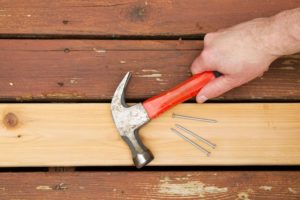 How to Fix a Squeaky Floor from Above or Below

How to Fix a Squeaky Floor from Above or Below

TOM: That’s right. But there are remedies to squeaks and creaks and here to tell us about them is Kevin O’Connor, host of This Old House, with the show’s general contractor, our pal Tommy Silva.

And Kevin, squeaks and creaks, they’re not so bad all the time, are they?

KEVIN: Sometimes creaky stairs and squeaky floors can add to the charm and character of an old home and sometimes these noises are just really annoying. So how do you get rid of them?

KEVIN: So how do you get rid of them?

TOM SILVA: The solution is first locate the squeak and you do that by stepping on the floor up and down. Once you’ve found that squeak, now you have to find the joist below that squeak. Once you’ve located the joist, you take two nails and put them on like an X and drive them into the floor joists. That will hold the floor down nice and tight to the joist, stopping the squeak.

There’s also a breakaway screw that you can use. Drive that through the finished floor, into the joist below. The head of the screw will snap off just below the finished surface of the floor. All you have to do is fill that little hole.

KEVIN: And what are you supposed to do if you have wall-to-wall carpet or if you’ve got a finished floor like vinyl? How do you get to the squeak in that case?

TOM SILVA: Well, if you have a finished floor like vinyl or even tile, it’s difficult because you can’t go through the vinyl or the tile. So if you can get access from below – like in a basement; or if it’s a plastered ceiling you may have to take down the plastered ceiling. How bad is the squeak to do that?

KEVIN: Alright, well we’ve got more information and a step-by-step video demonstration of those screws on ThisOldHouse.com.

TOM: Sounds good. And if you have teenagers like me, you just might want to leave those squeaks in place so you know when they’re coming home at night.

TOM: Tom Silva, Kevin O’Connor, thanks for stopping by The Money Pit.

KEVIN: Thanks, Tom and Leslie. Always great to be here.

LESLIE: You know, I swear we have got all of the squeaks and creaks completely memorized in our house. (Tom chuckles) You know, especially when Henry was much smaller and getting him to sleep through the night was more difficult to get …

KEVIN: You had to tiptoe around them?

LESLIE: We had to tiptoe down those stairs. I knew the first two were outside to the right, outside to the left, down the center. (Tom chuckles) I mean really; sometimes going through a house is like an obstacle course.

How to Fix a Squeaking Floor

How to Stop a Squeaking Floor Under Carpet, Hardwood, Tile or Vinyl

Flooring: Repairing, Refinishing and Replacing Wood Flooring in Your Home or Office

8 Easy Do It Yourself Home Projects

Fix a Squeaky Floor from Above

Fix Squeaks in a Hardwood Floor

Fix a Neighbor’s Squeaky Floor from Above

How to Fix a Squeaky Carpeted Floor

How to Fix a Squeaky Floor Through Carpeting