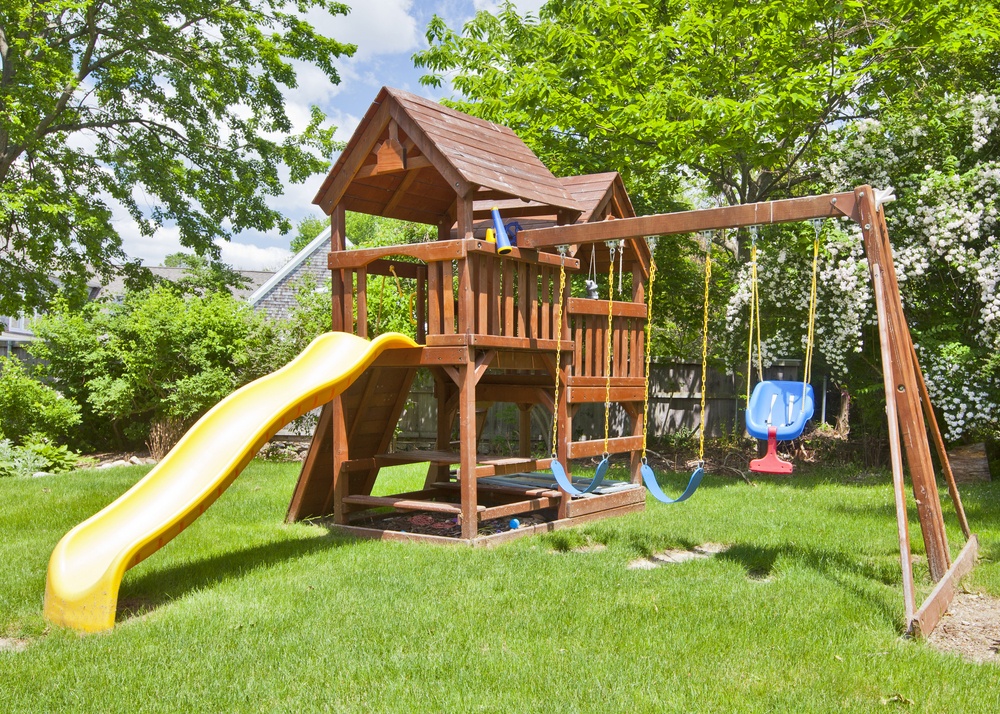 How to Build a Safe Backyard Play Area for the Kids

How to Build a Safe Backyard Play Area for the Kids

LESLIE: Well, as the weather turns warmer and kids move outside to play, it’s a great time to make sure that the play areas around your house are properly constructed and safe. 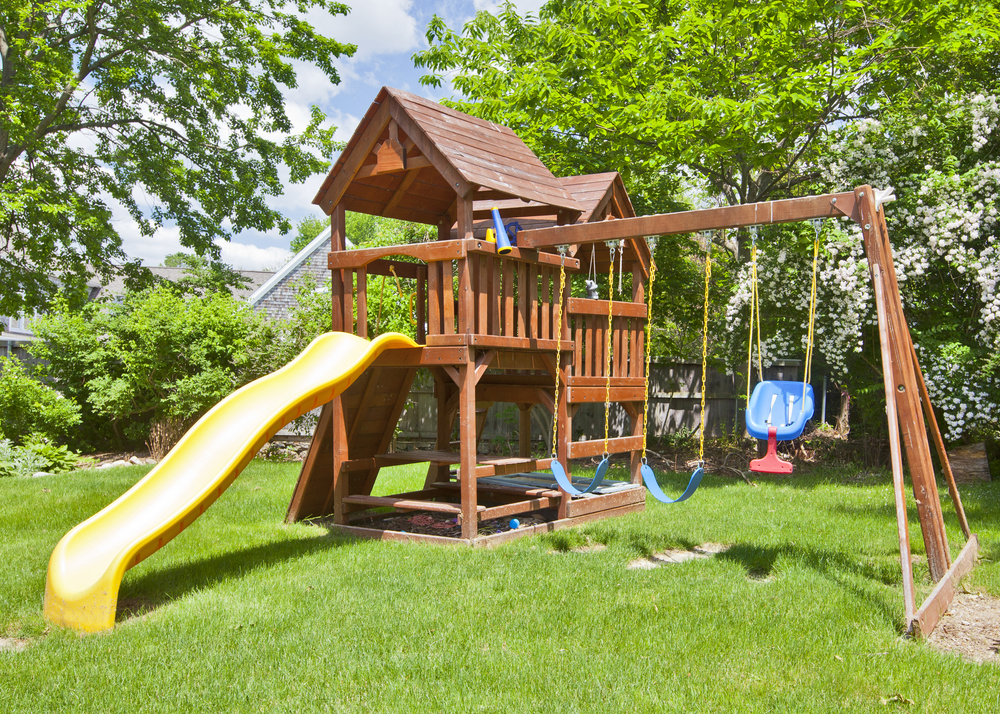 TOM: Or if you’re thinking that this might be the perfect time of year to build a play area that your children can enjoy for years to come, there are a few steps you need to take to make sure kids won’t get hurt. Here with the answers is This Old House landscaping contractor Roger Cook.

ROGER: Glad to be here.

TOM: So, you know, when the kids hit the playground, safety is obviously the last thing on their minds but it really needs to be the first thing when we’re building these spaces, right?

ROGER: Yes. I recently read that over 200,000 kids in the United States, under 14, are hurt in playground accidents. And most of those occur in the backyard.

TOM: Wow, that’s a staggering statistic. So, when it comes to building these playgrounds and building them safely, I guess the first thing we’re certain of is that kids are going to fall, so we want to make sure that that surface is safe. So what are the options?

ROGER: Well, there are a lot of options and it depends on, number one, money, aesthetics and what you like. So, let’s take a look at a couple different options. Obviously, one is sand.

ROGER: Now, they say that you should be 6 feet out from the structure that you’re trying to put this material into. That’s a big fall zone. But what you have to do is you have to excavate out the material that’s there and put in 6 inches of sand.

TOM: So it’s not just dumping the sand on top of the hard, packed earth that’s underneath. That kind of defeats the purpose, right?

ROGER: No, it’ll just get pushed out of the way and not do what it’s supposed to do. And that’s based on a height of 7 feet. If you get up to 10 feet, you’re going to need 9 inches. If you get up to 11 feet – but first of all, who wants a playset 11 feet? I mean you’re talking about putting in a foot of material, so it’s a lot of work.

ROGER: And again, there’s sand, there’s bark mulch, there’s special types of chips that are made for these areas. You just want something that if someone falls, there is a cushioning effect.

TOM: Now, I’ll tell you, I had a chance to not personally witness but I was there the next day after this happened. This past summer, I was at a high-adventure base where they had a lot of Scouts that were rappelling down walls. And not a Scout but one of the instructors lost his train of thought and he was rappelling down a 40-foot wall and he forgot to hook himself in. And this guy fell about 30 feet. And what was underneath was stone, like 3 feet of stone that they had built under these rappelling walls. And he walked away without a scratch.

ROGER: That’s amazing. But even something like stone has a little give to it.

LESLIE: Well, I know, because one of the safe choices that they’ve always been discussing is pea gravel. And in my mind, why do I want to jump off of a playground set into pea gravel? But you’re right: as long as you’ve got the depth, it’s got some play to it. And that’s really what you need.

ROGER: Yeah. The one thing I will warn people about – that the stuff we’re putting in these playsets gets in every nook and cranny and when the kids come inside, you’ve got pea stone, you’ve got sand, you’ve got rubber, you’ve got everything you can believe coming in the house.

TOM: Well, small price to pay, though, for keeping them safe.

Speaking of which, let’s talk about the materials that folks are building playsets with. For many, many years, we built it with pressure-treated lumber and we found out that wasn’t such a hot idea.

ROGER: Well, it’s like gardening. We always used to use pressure-treated around a garden. Now, we’re smart enough to say, “Hey, this isn’t a good thing. Kids could eat or chew on this stuff and we don’t even know it.”

ROGER: It’s just a better choice to go with material like a cedar, which is a natural – resists decay and will last a pretty long time in the soil.

LESLIE: And I think that’s important, also, because in order for the building structure to maintain its safety, you have to maintain it. So depending on the material that you choose – is going to determine the level of maintenance that’s required, right?

ROGER: That’s right. That’s right. And a couple other things to think about is when you’re putting in the playset, what’s around it? Is a swing going to bump into a slide or are they going to come off the slide and hit a tree?

ROGER: There’s a lot of things you should think about before you build it.

TOM: Sort of that fall zone has to be clear, not only from the piece of equipment that you expect them to jump off of but in any sort of intersections of two pieces of equipment like that.

LESLIE: Or intersection of siblings, pushing and the like.

TOM: Yeah, I think Leslie has been seeing a lot of that.

LESLIE: I just put in a playground set and so far, it’s been a disaster area.

ROGER: Well, no one got hurt, though.

LESLIE: No. Nobody’s got hurt but – “I want a twisty slide.” I get a baby swing for the little guy, the five-year-old is in the baby swing. I’m like, “Wait a second here.” So I can only see as one gets bigger how this is all going to work out.

TOM: And as those kids do get bigger and they jump on those swings, then the swing is something – that it walks, we used to say, you know, when you swing out? And it lifts – the back of the swing lifts off the ground. So, when you set those posts, it’s kind of like when you’re building a deck or anything else. You really have to have those posts deep in the ground, right?

ROGER: Yeah, usually these kits that come for the playgrounds have directions on exactly how to anchor them into the ground. And that’s one thing you shouldn’t cut corners, you shouldn’t skimp on. Because, like you said, it’s like a pendulum: that weight gets swinging out away from the center. It’s got a lot of pull on it.

TOM: Talking to Roger Cook – he’s the landscaping contractor on TV’s This Old House – about how to build a safe playground.

Now, Roger, besides the playground equipment and the space, what do you we need to consider when it comes to the railings? Because often you hear about kids getting caught in the railings.

ROGER: Well, there’s a code for the spacing between the railings. It’s either smaller than 3.5 inches or greater than 9 inches. There’s no way that a kid could get stuck in that. If it’s 3.5 inches, they can’t get between it; if it’s 9 inches, they can go in and out without getting stuck.

LESLIE: Roger, now, when it comes to safety, is there anything we should be looking for annually or twice a season to make sure that the whole structure is in a good shape?

ROGER: I always take and inspect the structure, especially if there’s ropes that are supporting a swing, for example. There’s good places for wear and tear to occur and if it does, then it could break and give way. A lot of the metal parts can rust and not be detected and can let go, also. And this happens more so in a place that would be – at a school where it really gets a lot of use and not very much inspection. Then there is a good chance you could find a problem.

Thanks so much for stopping by The Money Pit.