Hands-Free Faucets for the Home

Home » Hands-Free Faucets for the Home

Hands-Free Faucets for the Home

LESLIE: Well, hands-free faucets are so common now in restaurants and stores, you sometimes find yourself holding your hands under a regular faucet and wondering why the heck the water isn’t coming on. I mean I know I do that, even at home. 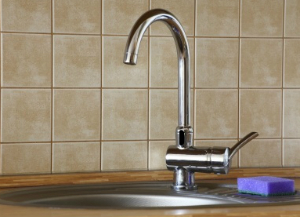 TOM: Well, now they are turning up more and more in bathrooms and kitchens at home. Here to tell us more about the hands-free faucet revolution is Richard Trethewey, the plumbing-and-heating contractor for TV’s This Old House.

TOM: This is an almost magical technology, right?

And at home, there’s all kinds of advantages. You save water. You just swipe your hand underneath it. It shuts the water on or off. It’s great for people that have limited mobility. In the old days, it was – the only choice you had was the big blade handles that’d you have to come in for people with limited mobility. So, pretty cool.

LESLIE: Well, it seems like it’s an interesting technology, Richard. It’s a motion sensor that realizes when your hand is under the faucet.

LESLIE: But is this a viable option to have in your home? Does it require a lot of maintenance?

RICHARD: Well, I think the key is the proximity sensor. These sensors, we see them in lights. You walk into a hallway and all of a sudden, the lights come on. So that simple switch, which senses your presence, is what unlocked this for the faucet. Now you can swipe your hand under it. It sees it – pass – it makes the switch. Now it goes to a solenoid valve, which opens and closes, opens and closes. So, those two devices are the key.

Well, if you’re going to have something that has electricity, you then have to have a power source so that most of these are battery-powered. Sometimes, you can plug them in. It’s not space-age technology anymore by our standards, in this American society of ours. A simple sensor, a solenoid and a power source and you’re good to go.

TOM: And that power source can last quite a long time. I’ve heard that those battery packs, because it uses so little power, it can last for over a year.

RICHARD: Yeah. On the same weekend you don’t change your smoke-detector batteries, you can not change your faucet.

TOM: Yeah. But it’s probably even more annoying to not have water than to listen to the beep of the detector.

RICHARD: You should change both of them; you need both of them to be operating. So, do it when you change the clocks.

RICHARD: Yeah. We did one on Ask This Old House this year that was really fascinating. Just there’s something really cool about just touching and have it come on. Just seems like you’re sort of a savant or a magician when you touch it. You need to have a higher-end brass faucet so you can conduct the signal but it’s really cool.

So, both of these have changed the plumbing game. To me, it used to be that this was strictly for handicapped or something like that but two things have come out. The technology is now proven and working and the price point has come down so there’s not some extraordinary premium for this simple technology. It used to be that it was probably a factor of two times more money and that’s not really the case anymore.

LESLIE: Mm-hmm. No, I think it’s interesting and it seems more and more common that everything is becoming automated. I’ve seen automated paper towel dispensers. So it becomes really helpful in the kitchen. Now, if you sort of combine this with an automated soap dispenser, this might actually be a good plan for kids.

RICHARD: Now you might get the kids to actually use some soap. Yeah, the same motion sensor is available now for soap dispensers. You get near it, it comes right out and you’re good to go. So, we will be completely hands free soon. We won’t need to talk to anybody, we won’t touch anybody; it’ll just be we’ll swipe our hands and the whole world will be perfect.

TOM: Well, I’ll tell you what, it’s pretty impressive technology and the price is coming down. And you’ve got to think seriously about getting one of these, folks, if you’re going to be updating your faucets in the near future.

Richard Trethewey, the plumbing-and-heating contractor from TV’s This Old House, thanks for filling us in. Really interesting project.

RICHARD: Great to be with you.