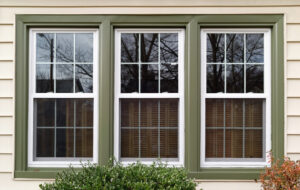 LESLIE: Diane in Missouri needs some help with windows at her money pit. What can we do for you?

DIANE: I have double-hung, dual-glaze windows in my living room; the kind that slide down and they have a little latch on the bottom.

DIANE: The windows won’t slide down far enough to latch.

TOM: That’s probably because they’re out-of-square. So, you really need to push them – push the bottom window down and the top window up enough where you can lock them together. And if they’re not locking, then something is swollen or out-of-square; it might need to be adjusted, Diane.

DIANE: OK. Now, I have brick veneer on the outside of my house and then, obviously, the drywall on the inside. And we’re concerned that the windows might need to be replaced, so that would mean, basically, tearing out the windows. So, is there any way to try to adjust the windows without taking the whole thing out?

TOM: Well, the first thing I would do is I would very slowly close the bottom window and I would look to see if it looks like it strikes the sill parallel. If it strikes one edge first and then there’s sort of a gap at the other end, then the window frame is out-of-square. It might be possible for a carpenter to do some adjustment of that or certainly some trimming of the window to give you enough clearance to be able to close it and lock it.

Because you mentioned possibly replacing the windows, you would use a replacement-style window if you did that and that would fit inside the wood frame of the existing window, minus the sashes. So you wouldn’t have to tear out the brick work to do that.

TOM: And today, if you replace them, you may be able to qualify for a 30 percent tax credit to the end of the year, which will cut down on the cost, if you use qualifying windows.

DIANE: OK. Well, thank you very much. I appreciate your help.

GeneralWindowsPodcasts Your Calls, Our Answers Podcast

How To Install Window Blinds

How to Fix a Door that Won’t Close Properly

How to Reduce Window Condensation