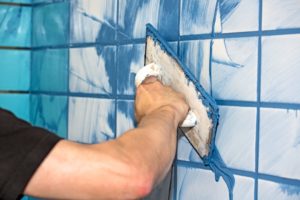 LESLIE: Earl out in Los Angeles, California, welcome to The Money Pit. What’s going on at your house?

EARL: OK, I have this one specific ceramic tile that everyone stands on when I shave or when my wife is in front of the counter and the grout in this one tile is constantly cracking around all four squares. And I’ve installed it maybe, over the last seven – maybe the last several years maybe four times.

EARL: And eventually it cracks all the time and it’s driving me up the wall.

TOM: Well, the problem is that there’s movement in that floor. What’s the floor made out of under the tile?

EARL: It’s a concrete base.

TOM: Is it a concrete slab?

TOM: But this is not on top of a wood floor?

EARL: It’s not on top of a wood floor. It’s upstairs. It was built in 1988 (ph) and I know the upstairs was concrete.

TOM: OK, if it’s upstairs then obviously – unless your second floor is constructed of concrete, I think what you’re referring to is a mud floor but underneath that there’s some sort of a wood structure. Generally when you get cracking around a grout line it’s because the floor is weak and there’s some flex, some bend; especially in an area where everyone’s standing all the times you’re always going to have a lot of pressure in that area. The tile is obviously loosening up; that’s why the grout joints are cracking.

One of the things that you could try is replacing the sand grout with an epoxy grout but that would require regrouting the entire space. But if the floor is not solid enough, even if it appears to have a mud floor, the tile is going to move because they don’t bend. Right, Leslie?

LESLIE: Mm-hmm, and the epoxy grout; the good thing about that – even though it’s a big undertaking to use a grout saw and get rid of all the existing grout – is that with movement the epoxy grout is going to sort of bend and go with all of that movement, so you’re not going to get that cracking at all anymore.

TOM: And also it’s not susceptible to staining at all. It’s a grout that’s a little harder to install but it doesn’t stain whatsoever.

TOM: Earl, thanks so much for calling us at 888-MONEY-PIT.

Tile and Grout Cleaning and Repair

How to Repair Floor Tile | Video

Do I Need to Seal Epoxy Grout?