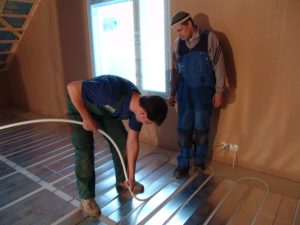 Tired of chilly floors? Adding radiant heat to your home’s floor can provide a for a very comfortable and energy efficient home, not to mention stopping the shock of setting foot on a cold floor first thing in the morning! We highlight two systems that can work for both new and existing homes.

Are you tired of feeling, well, tired?  For many people, these shorter and colder days can bring on a case of the blues that can impact your mood, focus and energy.  We’ve got easy DIY pick-me-ups to beat the blues and raise your spirit!

Want to get the most out of the hassle and expense of getting firewood?  All that hard work that can be undone all too easily if you don’t store the firewood properly before tossing it into your fireplace. We’ll tell you how.

Plus, we ask what is on YOUR to do list for the New Year. Whether you’re dealing with a repair or dreaming about a reno, we dig in to serve as your coach, helper or home improvement therapist for all things remodeling, decor or fix up!

Settle Domestic Design Disputes Once and For All, Discover Simple Pick-Me-Ups for Winter Blues, and Keep Pets Safe Through Winter

Episode #2058: How to Pick the Best Firewood | When to Upgrade Your Furnace | Fun Advances in Artificial Trees | Your Q & A