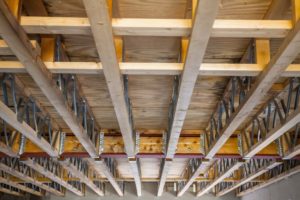 Do You Need to Insulate Garage Ceiling?

Do You Need to Insulate Garage Ceiling?

LESLIE: Tim in Arizona wants to know if he needs to insulate garage ceiling. What are you working on?

TOM: What’s above that ceiling space? Is any of the house above it or is it just the roof?

TOM: Yeah. Not really, I mean unless you are planning to work in that garage in cold weather and you want it to be warmer in there. But there’s no reason to insulate garage ceiling because there’s no – the garage is not heated and we’re also not worried about a cold floor above it. Sometimes, folks have garages where there’s bedrooms above it and they get kind of cold floors because of that.

TIM: Well, I guess part of what I’m asking is: could the heat somehow come down from the attic into the garage?

TOM: Yeah, it certainly can and it certainly will. Will the insulation help? I suppose it would, in that case, but you’re going to super-heat that attic space and so you’re definitely going to need to want to vent it probably more so than it is now. Because when you insulate garage ceiling, you also have to add ventilation. And since you’re in Arizona, where heat’s more of an issue than colder nights, it’s something you might want to think about.

Does that help you out?

TIM: Yeah. Maybe I’ll save some money on insulation.

TOM: Listen, we could think of more projects for you to spend money on. Just give us a chance.

Insulation and Weather Stripping to Keep Your Family Toasty and Warm

How to Insulate and Seal Drafts in Your House

5 Heating and Cooling Repair Projects You Should Never Do, and 5 You Can

How to Insulate Your Crawl Space and Save Money

Best Options for Heating a Garage

Insulating a Garage Ceiling: Worth the Investment?

Home Improvement You Must Do Right Now

Do I Need More Attic Insulation?