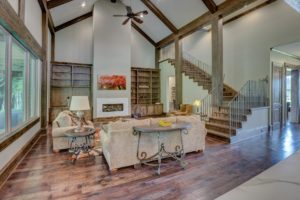 LESLIE: Al in New York is on the line with a question about insulating a cathedral ceiling. How can we help you?

AL: Yeah, I’d like to know if it is possible to insulate a cathedral ceiling. I had an addition – a bedroom put on the back of the house. And ever since the year it’s been built, it’s been rather cold in there. We’ve been compensating for heat with an electric heater. And I was just wondering if the problem is that my ceiling is not insulated.

TOM: Well, it’s entirely possible. Cathedral ceilings are very challenging to insulate because typically, if you’re using a batt product like fiberglass, for example, you need to allow for ventilation space. So if your rafter is a 2×8, you can only fit 6 inches of insulation in that space, because you have to leave the extra space for ventilation to basically move air in and out of there and keep it nice and dry. And 6 inches of insulation or generally 5-1/2 by the time you get all done – because there’s a little bit of compression of settlement – is only about R-19 when you really ought to have about R-40, about twice that much. So it’s a very difficult space to insulate.

Now, if you took the drywall down and took the fiberglass out and you used spray foam in that space, then you could achieve the R-value that you need within that same space. But of course, that’s more expensive and more trouble. It clearly sounds like you don’t have enough BTUs, in terms of your heat volume getting into that room. So, when you say you’re using electric heaters, are you using space heaters, Al, for this?

TOM: Yeah. So what I would do is this – and how often do you have to use them?

AL: Oh, say, when the temperatures get down below 10 degrees and gets too cold.

TOM: Alright. So here’s what I would do. I would install – because this is going to be the least expensive – it’s expensive to heat but the least expensive way to get a heating system. I would put in the room, I would put electric strip heaters – electric baseboard heaters. They look like the same way that hot-water radiators look when they go along the baseboard. They look just like that but they’re electric. And I would hook it up to a thermostat.

So you can set the thermostat that whenever it goes below X, then those heaters come on and supplement the heat. This way, you don’t have to be so personally involved in turning on and off the heaters and moving them around. It’s going to be a safer heater overall. And it can be thermostat-actuated. In fact, the thermostat could be a setback so that, for example, perhaps if it gets that cold in the middle of the night, you don’t care so much. But if it happens during the waking hours, so to speak, then you do.

So I would make that level of investment. You’ll get those electric heaters installed by an electrician, run off the thermostat and compensate that way. If it’s just one small space like that, that’s probably the best way to handle it.
AL: I have one other question pertaining to that room. Also, when the heating system was put in that room, it was naturally just attached to the existing system. And I’ve noticed that there is no cold-air return duct. Is that a problem?

TOM: Yeah, it definitely is a problem because the way rooms get conditioned is by an exchange of supply and return air. So if you just tried to extend some ducts to there and you’re not pulling any of that air back to be reheated, you can’t just pump warm air into the room and expect it to happen. You’ve got to pull the cold air back. So, yeah.

I mean you might want to have a good-quality HVAC contractor look at it and see if there’s any type of adjustments or changes that you can make to the ducting system to do a better job. But if nothing else, I would get some electric-resistance baseboard heaters in there permanently and professionally installed, run off a thermostat. You should be much more comfortable.

AL: Which would be a cheaper route to go: the ceiling or the heating?

TOM: The heating because the ceiling’s a big job. You’ve got to tear it all apart and you’ve got to have a spray-foam insulation company come in. And to do a small job like that, they still have to bring the manpower and the big trucks, you know what I mean? So, it’s a big sort of cost to get started with that. So I think the baseboard heat, in your situation, would be the way to go.

How to Winterize Your Home

Tips to Insulate a Cathedral Ceiling

How to Insulate and Ventilate a Cathedral Ceiling

How to Insulate a Sloped or Cathedral Ceiling