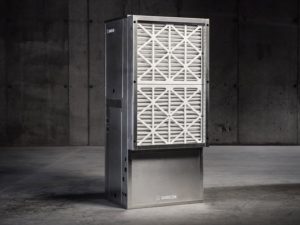 by The Hosts Leave a Comment [Sponsored by: Dandelion Energy]

LESLIE: Well, in many parts of the country, we’ve just wrapped up another heating season. And for those, especially, in the Northeast, that means you’re left with a dirty, smelly, oil-fired or propane heating system that needs another cleaning.

TOM: If you’re ready for a more affordable, cleaner and more reliable solution, geothermal may be just the solution. Dandelion Energy is making home geothermal installations affordable. And with us to talk about that technology and how it can work for you is Kathy Hannun, Dandelion’s CEO.

KATHY: Thank you. Thanks for having me.

TOM: So, hey, I see you’ve got a pretty strong history in helping find ways to make our world a bit greener. I was interested to see that you led a team that created technology to extract carbon dioxide from seawater, to create carbon-neutral fuel. That is a very cool history.

KATHY: Thank you. It’s a very fun project to work on.

TOM: And now, you’re helping to do that with heating systems. You guys are launching a geothermal system, by Dandelion Energy, that is very, very efficient. For those that are not familiar with how geothermal systems work and how they may be different from a fossil-fueled system, can you give us kind of an overview?

KATHY: So, geothermal systems make use of the fact that there’s a lot of low-temperature thermal energy that’s just constantly right beneath the Earth’s surface.

LESLIE: Now, Kathy, I just got back on a trip from Iceland. And there, everything is geothermal heat. And there is so much heat and hot water and it’s wonderful because there’s an endless supply. But here, in the continental United States, that’s not the case. So, how is it sort of different, in what we’re reaching for underground, to provide this heat source, I guess?

TOM: Yeah, we’re not talking about molten, volcanic heat here in the States. But I guess it is a constant source of energy that’s warmer than the atmosphere.

KATHY: It is. And it’s a great distinction, because I think a lot of people think of volcanoes when they hear the word “geothermal.” And it might be reassuring for people to know that no, we’re not going down to the molten core of the Earth to provide heating for your home. It’s actually a different type of geothermal energy. So, whereas electric geothermal requires really, really hot temperatures under – deep underground, this type of geothermal heating and cooling, it’s much lower temperature, much shallower. And you’re just harnessing that heat directly for heating and cooling in the house, so you’re not making electricity with it.

TOM: We’re talking to Kathy Hannun – she’s the chief executive officer for Dandelion Energy – about the geothermal opportunities that lie just beneath the surface of our Earth to heat and cool our homes.

And Kathy, I want to ask you about your company. You actually were spun out of Google’s X lab. Now, Google’s X lab is an organization that is responsible for a lot of innovation. How did that happen?

KATHY: Really, the insight that started Dandelion was – you know, we go through a lot, as a society, to heat our homes today. If you think about how we’re drilling for oil somewhere in the world, that oil has to be refined, then it has to be shipped, then it has to be delivered in a truck to an oil tank in a homeowner’s basement. And then that homeowner uses the furnace to burn that oil for heat, when every home is already sitting on top of an essentially infinite reservoir of renewable thermal energy that they could just tap into using geothermal.

And the reason that hasn’t happened in the past is because geothermal has been a luxury product. So it’s very popular among the ultra-wealthy but it just hasn’t been affordable to the typical homeowner. And so, Google X really focuses on how do we use technology to create products that could really change society in a positive way. And being able to give every homeowner the opportunity to save money and use a renewable resource that they already own in their yard – instead of paying for sort of dirty, smelly oil every year – seemed like one of those opportunities. And so we really have invested in creating the technology to make these systems much easier to install and much more affordable.

LESLIE: And this truly is for every part of every place in this United States? I mean is there any criteria as to where your house is located, what type of ground you’re on, the ability to go to a certain depth? How do you know if this even works for your house?

KATHY: Almost every home in the United States can do geothermal. But the homes that it makes the most sense for are ones that are in places that get very cold in the winter and also have a relatively warm summer. So that’s why Dandelion has started in the Northeast, because that’s certainly the case here.

And on top of that, a lot of homeowners – millions in the Northeast – are purchasing really expensive heating fuels. The more money you spend on heating today, the more you have to – you could save if you switched to geothermal. So, the financial consideration is just really, really great in the Northeast. But it’s also very strong in the Midwest and other parts of the country that have cold winters and warm summers.

TOM: Let’s talk about that finance end of it. What’s the typical return on investment? How much more efficient is geothermal compared to these fossil-fueled systems, like propane and oil? And how long would you expect the reinvestment to take? What is that return? Is it something that happens within a decade?

KATHY: Yeah, it is. So I’ll just give you a quick example of one of our customers here in New York named Tiffany. She was using fuel oil before she switched to geothermal. And she was spending about $3,000 a year on fuel oil. Now, keep in mind that oil prices are not at their peak right now.

KATHY: So you could imagine that – who knows what will happen with the price of oil over the next decade? But it could go way up from that, it could potentially go down from that. But history suggests that probably it might go – there will be some years that she’s spending much more than 3,000.

Anyway, today she’s spending about $3,000. Once she gets geothermal installed, she’ll be spending about $700 total on electricity to run that system. She’s coming out ahead about $2,300 a year. And in her case, she knew that she had to replace her furnace anyway within the next five years. It was getting towards the end of its life. And now, she’ll have this brand-new geothermal system that does heating and air conditioning. She won’t have to spend $15,000 on a new furnace and installation. We charge about 18,000 after tax credit for the system, so her payback is very strong.

TOM: Kathy Hunnan is the CEO of Dandelion Energy.

Kathy, thank you so much for stopping by The Money Pit.

KATHY: Thank you for having me.

Geothermal Heating: Is It Worth Installing?