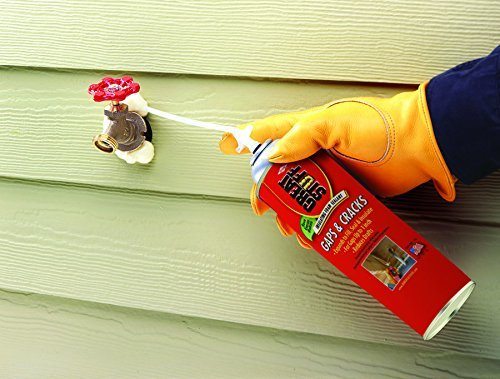 Cleaning Spray Foam Insulation From Vinyl Siding: Is It Possible?

Cleaning Spray Foam Insulation From Vinyl Siding: Is It Possible?

LESLIE: Now we’ve got Doug in Virginia on the line with a siding question. How can we help you?

DOUG: Yes. I had – my son’s house has some vinyl siding on it. And the folks that owned it before he did were patching something with some of the spray-foam insulation – the crack-filler stuff – and it oozed out all over the siding. So I know I can go back and cut it loose, cut what’s extra stuff. But when I get down close to the vinyl, what can I clean the residue off with to make it clean without damaging the vinyl?

TOM: It’s very difficult because you get – those foams are usually polyurethane and they have real adhesive qualities to it. Real adhesive. So, what you can do is try to gently scrape it off with a putty knife. But make sure you – an older one is better because it won’t be quite so sharp. And very carefully do that.

And then, I’ve stripped off some foam – errant foam – with WD-40 as the solvent. So you might want to try that with a Scotch pad because Scotch pad is not abrasive. But you could spray the siding with the WD-40 and then work the Scotch pad back and forth. You may find that you pull off some of that residue. It really depends on what kind of foam it is. But you’re right, once it’s dry, to cut as much of it off and then try to abrade the rest of it off. But do so with a mind not to damage the siding.

TOM: Yep. Try it. It’s one of the thousands of household uses for WD-40. You know, they say you only need two things in your toolkit: WD-40 and duct tape. They’re pretty close.

DOUG: Then I can go over the whole back of the house with WD-40 to revitalize the vinyl, right?

DOUG: But would I get an oily spot when I use the WD-40 that will look different than the rest of it?

TOM: You will, you will. But soap and water will take it away.

LESLIE: That’s why it’s good for only like a little spot.

DOUG: Alright. Well, thanks a lot.

Siding That Builds Value for Construction Pros and Consumers Alike

12 Advanced Building Products that Help Save Money on Energy Bills

Stop Rodents from Wrecking Your Home with Mice in Insulation