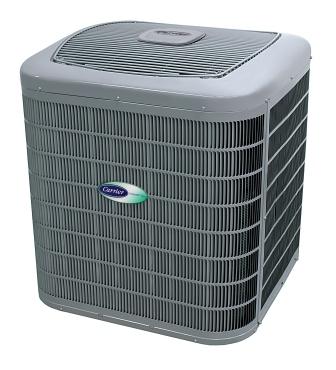 TOM: Welcome to this edition of the Money Pit’s Top Products podcast. Today we’re going to focus on a cooling product with summer right around the corner. And if your home’s heating and cooling system is controlled by a heat pump, don’t let the name fool you. These units are perfect for homeowners in southern states and across America, because they use the ground or outside air temperatures to both heat and cool your home perfectly. And if you’re thinking about a new heat pump, there’s an extremely efficient one available that will make your neighbors green with envy, literally. It’s the Carrier Infinity 20 heat pump with Greenspeed intelligence, and it can make your system more efficiently, run more consistently, and be quieter as well. Here to tell us more is Rob Lambert, the Product Manager and Application Engineer for Carrier. Hey, Rob.

ROB: Hello, how are you?

TOM: I’m good. So this sounds like a pretty advanced unit. I noticed first off that it’s coming in at a 20.5 SEER. So to kind of explain what that is to our audience, kind of let you kind of introduce us to the concept of SEER and why that might be an important number when we’re considering a cooling system. [0:01:04]

ROB: And that is the way that our industry recognizes the cooling efficiency of air conditioners and heat pumps, so both those types of products use the same cooling efficiency designation. And kind of what that is, it’s a seasonal number that takes kind of average temperatures throughout the year into effect, along with cycling on and off, and it comes up with a number that you can use to compare one system to another as far as how efficiently it cools the home.

TOM: Good. So it’s a standard by which we can really do sort of an apples-to-apples comparison.

TOM: Now, this new Carrier product that you have guys have come out with seems to be very efficient at a 20.5. Tell us about it.

ROB: That’s correct. That is a very efficient unit. So in the cooling mode, it can get up to 20.5 SEER, which is among the best in the industry right now. But along with that, it can also provide superior dehumidification in regions where you have a lot of humidity in the air. So another one of the jobs of a cooling system is to not only cool the home, but dehumidify the home. [0:02:23]

TOM: That’s a good point. And I think that a lot of folks don’t recognize the fact that we use air conditioners to dehumidify, but for the most part, air conditioners don’t necessarily do the best job as a dehumidifying appliance. I mean it isn’t specifically designed as a dehumidifier, say, as perhaps a whole house dehumidifier may be. But it sounds like you guys are tweaking your engineering with these units now to make them actually perform better and perhaps more efficiently as a dehumidifier; is that correct?

ROB: That’s correct. What we do, we have a lot of capacity control with this unit. So as the conditions get a little bit milder, which is really the harder time to dehumidify, we can kind of slow the unit down, if you will. It’s what we call – it’s called a variable speed unit. So the compressor and the fans can speed up and slow down based on what the demands are, both cooling and dehumidification. We’re not only sensing the fact that you need cooling in the space, but we also sense that you need dehumidification in the space, and that balance between those two change as it gets warmer and colder out. So that’s what’s really great about this system is a typical system will run at full blast all the time. [0:03:37]

TOM: Right; it’s either on or off.

ROB: And that’s fine when it’s really hot out and really humid. But as the heat level goes down but the humidity level stays up, the variable speed really helps, because it can slow down the compressor to continue to run without overcooling. That’s typically what would happen is if you tried to use your air conditioner to dehumidify, it would start getting too cold and clammy in there.

ROB: So this one can sense that and say, okay, I need to run at minimum speed for a long time to really wring that moisture out of the air. And that’s one of the big reasons that this unit is different than just about everything else out on the market right now. [0:04:18]

TOM: We’re talking to Rob Lambert, and he’s the Product Manager and Application Engineer for the Carrier Company, about the new Carrier Infinity 20 heat pump with Greenspeed intelligence. Now, Rob, it also seems that too frequently, when you use a heat pump, or really any system, it has sort of two temperatures: Deep freeze or blast furnace, right? People tend to go to extremes. They’ll either run it on full blast all the time, and as you say, it ends up being very cold and clammy, or in the heating mode they just let it go full speed, and either of those two extremes, it would seem, is pretty wasteful. So does this technology also help us really balance out comfort and temperature so it really gives us just what we need but not too much where we’re wasting energy? [0:05:00]

ROB: Exactly. The Infinity 20 heat pump with Greenspeed intelligence has quite a bit of just that, intelligence built in. So typically, like you say, you would have to put a piece of equipment in that can heat and cool at the worst case conditions, right?

ROB: So your equipment has to be able to handle either one of those. So it’s fine when it’s at those conditions, but the thing about that is it’s at a very small percentage of time during the year. Most of the time you don’t need all of the heat or cool you have, so that’s another point that’s the variability of the Greenspeed intelligence is it can slow down to match the load.

ROB: So load matching, that’s a term that some people that know a little bit about heating and air might understand, is if you match the load you can stay much more comfortable in the house and deliver the conditioning at a much higher efficiency.

TOM: Well, and just to kind of try to make that simple, the load is basically the amount of heat that the house collects that has to be dissipated in very simple terms. I know we’re talking about measuring BTUs and coming up with enough cooling to counteract the amount of BTUs that we’re generating. But basically we want just enough heat or just enough cool and not too much, correct? [0:06:16]

ROB: That’s correct. The load is – it’s the same thing in both heating and cooling is how much heat your house is either losing or gaining based on the outdoor conditions.

TOM: Now, with all this technology, is the unit noisy? Has anything been done to make it quieter?

ROB: Yes, very much so, in this unit as far as quiet goes. We have done a lot of work to ensure this unit is quiet. And if you look at the sound ratings for this unit, with it being a variable speed, it does change. I mean it goes as low as 58 dBA in cooling and as high as 676 in heating. So what it does is, depending on how warm it is outside or how cold it is, the system knows how fast it needs to run to kind of maintain the comfort level inside the home. [0:07:08]

So in the cooling mode, we don’t run very fast at all. Our sound level ranges from 58 to about 69, depending on what the size is. As you can imagine, the speed of the compressor changes quite a bit. And then in heating mode, we can run as low as 62 and as high as 76, so it changes quite a bit. The only time it gets up to the 76 is when it’s really cold out. And that’s one thing about the Greenspeed intelligence; it can deliver a lot more heat than a standard heat pump.

TOM: Yes, I was going to ask you about that, because with a standard heat pump, when folks tend to use it improperly, they’ll, you know, bounce the thermostat up too high. They will typically kick in the electric resistance heat. This is to help sort of monitor that so that we don’t use the backup heat that’s germane to heat pump systems unless we really need it? [0:08:00]

ROB: Exactly. You know, one thing I want to point out is this is the highest heating efficiency heat pump on the market today of any air source type heat pump, which is the majority of types of units that are used in the United States. We’re up to 13 HSPF, which HSPF is the heating measure. We talked about SEER a while ago.

ROB: S-E-E-R. HSPF, or Heating Seasonal Performance Factor, is the heating designation of that. Just wanted to make sure and point that out, that it’s very efficient. But yes, the unit will keep from staging on your auxiliary heat at a lot colder temperature than a typical unit, so this becomes really important if you’re on a propane or an oil type backup situation. Those fuels are very expensive right now.

ROB: This unit can speed up the compressor to operate on the more efficient fuel source for longer periods of time.

ROB: Because they can satisfy the heating demand even into the very cold temperatures.

TOM: It sounds like a very nicely designed product. Rob Lambert, Product Manager and Application Engineer for the Carrier Company. The product is called the Carrier Infinity 20 heat pump with Greenspeed intelligence, and it also is covered by a ten-year parts limited warranty to the original owner. If you’d like more information, you can log onto the Carrier web site at carrier.com, that’s C-A-R-R-I-E-R, dotcom, or pick up the phone and call them at 1-800-Carrier. Thanks, Rob.

Should You Get a Central Air Conditioning System?

Solar Panels and Geothermal Heating for Your Home

Getting Rid of Humidity and Condensation from Heat Pump