TOM KRAEUTLER: Hey, we’re back at Greenbuild 2012. This is The Money Pit’s Top Products podcast. You know, ceiling fans are a great addition to bedrooms and dens and other places in your house because they help move air through the ceiling and they really can help cool things down and keep you comfortable. Now there is an amazing new type of ceiling fan that is called the Haiku that is pretty much running circles around anything else that is out there. We say that because it has got a very sleek modern look. It is very energy efficient and it is made with renewable materials. It is made by the Big Ass Fan Company and with me to talk about that is Alex Reed. Hey, Alex.

ALEX REED: Hi, how are you?

TOM KRAEUTLER: So you are the brand manager. This is your baby?

ALEX REED: Absolutely, yes. I can’t take credit for designing the fan, but I do take great pride in telling as many people about it as I can and bragging on it whenever I get the chance.

TOM KRAEUTLER: All right. Let’s talk about the design first because it really is quite unique. Ceiling fans, frankly they are pretty typical in the way that they are designed and you don’t see a lot of innovation. You guys have really turned this upside down. For example, I noticed instead of seeing the monstrous motor that hangs from the ceiling, you have made that motor much smaller and it actually hangs with the blades.

ALEX REED: Well actually, everything we do really starts with engineering. So we have looked at the ceiling fan—the residential ceiling fan, specifically—and said, “What is wrong with it?” If we are going to do this, if we are going to market residentially, we have to understand everything that can be improved upon and then do that. And like I said, we start with engineering and the motor was the most logical choice. So it is a completely redesigned motor and that is what gives it that sleek look. It is very minimalist; the electronics are mounted directly inside so you don’t have that large tin can. It is very energy efficient so you don’t have heat being dissipated. You don’t have the big metal vent that is typical of a ceiling fan. You don’t have any noise coming from it. [00:01:45]

TOM KRAEUTLER: It looks like it is a lot lighter than traditional ceiling fans. Is that true?

ALEX REED: Yes, absolutely. It is only thirteen pounds. One person can install it no problem and it is just—again, it is very minimalist and that is kind of what we were going for. Nothing more than is needed is on this fan.

TOM KRAEUTLER: Now you guys are known for the Big Ass Fan product, which is this beautiful, huge fan that is used in industry. It is used in shops, it is used in restaurants, it is used in conference rooms. And it always moves so smoothly, so elegantly, you never see the slightest impact of a wobble which is so traditional with ceiling fans. You almost always, as time goes on, they get out of balance and they kind of wobble a little bit. This fan only has three blades as opposed to—what is it—five or six with a traditional ceiling fan? How do you keep the balance so in check? [00:02:33] 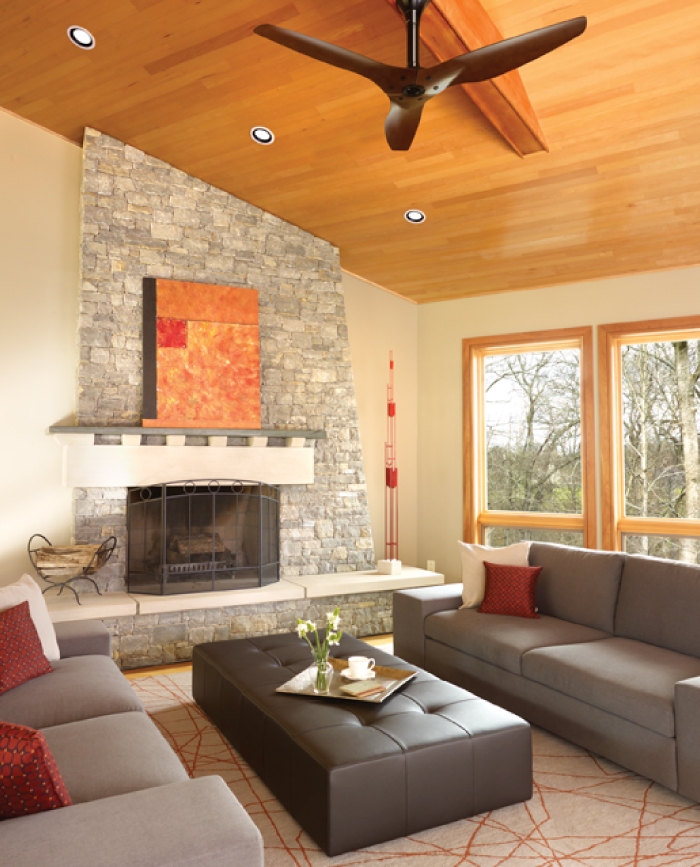 ALEX REED: Well, all of these fans are hand balanced. We manufacture everything ourselves and when we get these fans, we sort the air foils by weight. So we match them up directly. You couldn’t just take an air foil off the assembly line and plug it on there, so we have looked extensively at each fan, we assemble them, we hang them, we use sensors and we make sure that there is no wobble before we package it back up and send it to the customer because we believe that is important. We would never send a balancing kit with the fan and ask the customer to improve a product that was not built up to par.

TOM KRAEUTLER: Yes, that is so great to hear. Now let’s talk about the energy efficiency of these. Many people use ceiling fans to try to offset cooling costs, for example—taking some of that cool air from the floor and trying to pull it up into the room to be more comfortable. What does it cost to run these fans compared to more traditional paddle fans?

ALEX REED: You could run this fan for five dollars for the entire year. It is very energy efficient. In fact, it is EnergyStar’s top rated ceiling fan. It uses only two to thirty watts, depending on the speed. The motor is about an 80 percent improvement on efficiency in terms of existing motor designs. So, like I mentioned, the benefits of that—obviously low operating cost, no heat generated so it doesn’t have to be ventilated, and then there is no noise escaping so you get a quiet and energy efficient ceiling fan. [00:03:53]

TOM KRAEUTLER: Now it seems to me like it is probably a lot easier to install because if you look at the old-fashioned paddle fans, they are quite heavy—maybe 25 pounds or so, plus the wobble that we talked about that you guys have eliminated. How do you make installation easier with the 13 pound fan?

ALEX REED: Well, like I said, it is a lightweight design, so that helps first of all. But if you look at the fan, it all connects directly to the motor. You don’t have all the screws and awkward blade holders and different assemblies, all the extraneous materials on this fan. Since it is minimalist, you have a direct connection at the center of the fan. It all fits together very seamlessly which, I think, makes the installation experience much more intuitive for the customer. There is no guessing on where does this screw go. It all makes sense when you put it together. [00:04:38]

TOM KRAEUTLER: Alex Reed from Big Ass Fans. Thanks so much for filling us in on the Haiku. Where can we go for more information?

ALEX REED: You can go to either BigAssFans.com or HaikuFan.com.

TOM KRAEUTLER: That is H-A-I-K-U.com

TOM KRAEUTLER: Thanks very much.