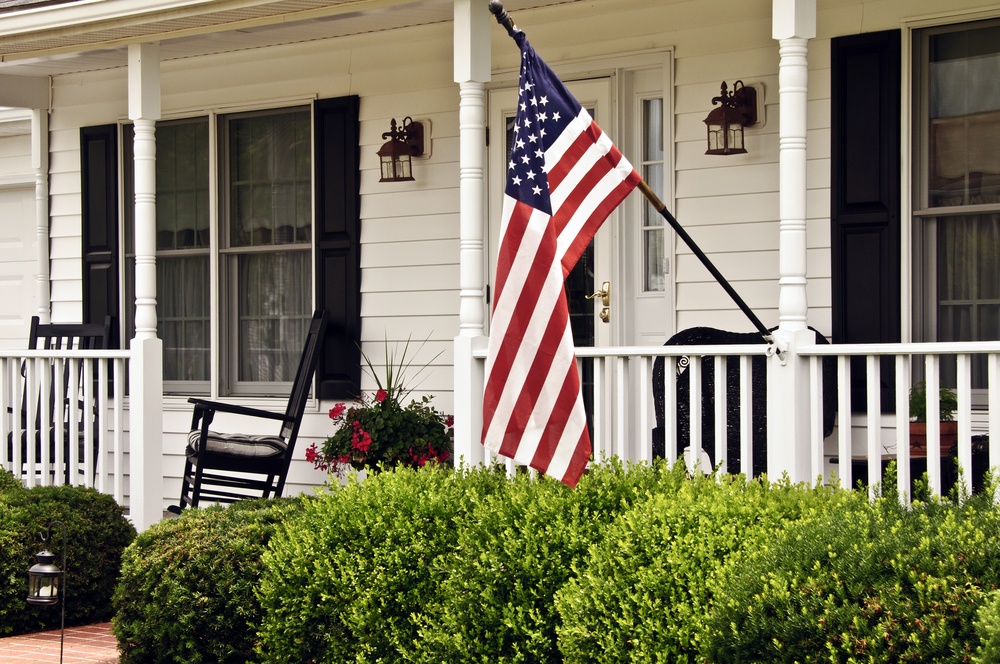 With July 4th this weekend, we thought it’d be a good time to dust off a few DIY tips to help you get your flags up and flying high.

There are standards to follow when flying the American flag.  According to the United States Flag Code: “No disrespect should be shown to the flag of the United States of America.”  As you prepare to bring out the stars and stripes, here are a few rules and etiquette to help ensure the honor and respect of the flag with a careful, thoughtful display:

Always handle the flag carefully. It should not touch the ground, become worn or soiled.  Flags should also be folded with the same care and respect.

When flying the American flag, it should be displayed with the blue union up, except as a distress signal in times of dire emergency.  So, if you fly your flag from a staff, make sure the union is stationed at the staff’s peak, and if the flag is displayed on a flat surface outside or inside the home, the union should be uppermost and to the flag’s own right; that is, to the observer’s left.

Another important etiquette: never use the flag as a wrapping or any other sort of decoration. That’s what red, white and blue bunting is for.

When hoisting the flag, raise it briskly. Lower it ceremoniously to a recipient’s waiting hands and arms, taking care that no part of it touches the ground or any nearby objects along the way. Then fold the flag neatly and carefully for storage.

When flying the American flag at night, make sure there is a light on it at all times. Pick a spot that’s illuminated by a porch or street light, or consider installing sensor lights that automatically come on in the evening.

The American Flag should never be used for advertising or printed onto anything designed for disposal, such as napkins and paper plates. The Stars and Stripes should also not be embroidered onto furniture, cushions and handkerchiefs, or worn as clothing. Flag pins are OK to wear; however, as a rule, they should be displayed on the left lapel, nearest the heart.

If the flag becomes worn out, make sure to dispose of it properly, preferably by burning it.

So next time you’re driving down your street and pulling into the driveway of your beautiful home, think about flying the American flag. Use these rules and etiquette to honor and respect the symbol of freedom that has made so many things possible for Americans.

Get Rid of Fruit Flies in Garbage Disposal

Eliminate Rain Leaks Around Your Foundation