You are here: Home / Tips for Planting Flower Bulbs

LESLIE: Well, planting bulbs is easy enough but with a few simple tips, you can get an even bigger, better display come spring. 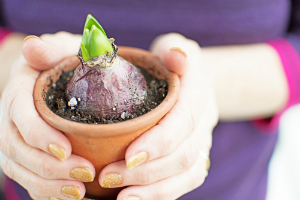 TOM: To help us get the best return on our bulb investment, we turn to Roger Cook, the landscaping contractor for TV’s This Old House.

ROGER: I get it, Tom. Bulb investment.

TOM: Get it? Bulb investment?

So, what are the keys to keep in mind when planting bulbs. And are they always planted in the fall?

ROGER: Well, you have two different types of bulbs. You have the spring-flowering bulbs: the tulips, the daffodils, the crocuses and all those that need to be chilled for a period of time before they’ll bloom.

ROGER: Those have to be planted in the fall. Then you have other bulbs, like gladiolas, that you plant in the spring for a summer flower.

LESLIE: Now, when you’re saying “planted in the fall,” is that strictly based on the calendar year or are we looking for an indication in the ground?

ROGER: You’re looking for an indication in the ground when – once temperatures start to cool off is when you want to put these bulbs in. And it is usually late fall, early winter.

TOM: If it gets below freezing, can you still plant them?

ROGER: As long as you can dig a hole, you can put them in the ground. It’s not a problem.

ROGER: Yeah, yeah. For some of you procrastinators who get stuck with them, you can go out there and chisel out. The other thing is if you do have leftover bulbs, put them in a pot, put them in a cool place in the garage and then bring them in the house after six weeks and see what happens.

ROGER: I mean the worst case scenario, you get a few flowers.

LESLIE: You know, I have to tell you, the whole concept of planting bulbs, I’m always envious of neighbors who do it because it seems like you really have to think about it. You’ve got to think about what’s going to look right with different heights, different textures, different colors.

And then you go to some many of these online shopping sites with these beautiful bulbs. And I ended up sitting there online for an hour-and-a-half picking out this amazing display of things, which I never ordered because it seemed so complicated and I felt like I was going to screw it up and everything was going to die. And I just abandoned ship.

ROGER: That’s why you have to hire me.

ROGER: Well, for you I will. How about that?

LESLIE: So, help me to understand. What am I shopping for? What am I looking for to really sort of make a beautiful, layered effect?

ROGER: It’s all about sequence, just like any other garden item. You’re looking for things that are going to bloom early, middle, late and then you’re going to look for the height of them to blend them all together. I like to do daffodils primarily because they naturalize. Crocuses, they naturalize. They’ll come back year after year.

ROGER: They give you more and more flowers. Tulips, generally, for me, the first year I get 100 percent, the second year you get 90 percent. And then after that, it drops off considerably to where you have to replace them. The other thing is the deer love tulips.

ROGER: Oh, man, do they love tulips. And they won’t eat …

LESLIE: And I feel like every time I look outside, I see a squirrel standing on my front steps eating a bulb as if it were an apple, so …

ROGER: Yeah. You’re not – he’s not eating a bulb. He’s probably eating an acorn. They really don’t eat the bulbs. What they go after sometimes is the bone meal that we use to plant them with. So they actually dig the bulb up to get to the bone meal underneath them. So that’s why I use a chemical soup of phosphate underneath it so it won’t attract the squirrels.

TOM: Alright. So just back up. So when you actually do dig the hole for the bulbs, how deep is that going?

ROGER: Usually two-and-a-half to three times the height of the bulb.

LESLIE: Can you put more than one bulb in a hole to sort of…

ROGER: You can actually…

ROGER: Yeah. No, no. It’s great. We even did a segment this year where we dug out an area that was maybe 6 feet by 4 feet. We dug the whole thing out. We put in a layer of daffodils, we put in a layer of crocuses, we put in some tulips and everything. So we layered them as we came up. And in the spring, it’ll be just an absolutely beautiful display.

LESLIE: I should’ve hit Buy instead of X: Close the Window.

ROGER: Yeah. But the thing is that tulips and all the bulbs are interesting, because they’re not pretty to look at but they’re so beautiful early in the spring that they’re well worth the effort to put in the ground.

LESLIE: And I guess the important thing to know is your zone. That’s the key?

ROGER: Yep. And that’ll help you get the right bulbs.

And the other thing I tell people to do is take a few, plant them in an area where you don’t see very well. And those are ones you’re going to cut and bring into the house. See, people won’t cut them out of their main display because they feel like they’re ruining it. But if you take and set a few aside and stick them in the back corner of the garden, when they flower you bring them in the house. It’s pretty…

TOM: It’s a great tip. So plant some just for harvesting?

TOM: Excellent advice. Roger Cook, the landscaping contractor on TV’s This Old House, thank you so much for stopping by The Money Pit.