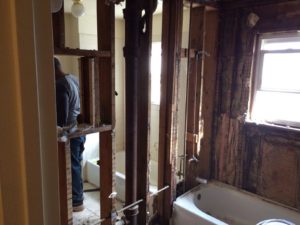 LESLIE: Now we’ve got Philip on the line who needs some help installing a bathroom. What are you working on?

PHILIP: Well, we have an unusual house. It’s all concrete – poured concrete – back in the 80s. So all of the walls and the upper and lower are concrete. Now, we have one bathroom in this house. However, we want to install a small half-bath in the bedroom, right next to the bathroom that’s in the basement now. So, we have a concrete wall between the two. We have concrete floors where the toilet and the bathtub is installed. Now, between the bathtub and the other wall, the plumbing is in there. That’s not concrete; that is framed in.

So that has – we have access to that in the room next door. But the question is – we want to install another bathroom – a half-bath – so we want a toilet and a sink. The sink is no problem as – because of what I just said about the plumbing being roughed-in there. But boy, how do – we really want to do this, so it’s going to take some, I assume, some demolition work to get down into that.

TOM: So what room do you want the half-bath to be in? Is it going to be on the same level as the existing bathrooms?

PHILIP: That is correct. It’s in the lower level. It’s basically the same as – you know, you could just say it’s a basement. The only difference is is that the wall between the bath that is there now and the bedroom right next door, which where we want the half-bath, is a concrete wall.

TOM: OK. So you’re worried about getting through the wall that separates these two bath spaces. So you have concrete below, then you have a concrete dividing wall? What about the ceiling? Is that typical wood construction?

TOM: So, OK. Well, there’s two ways to do this. Number one, yes, you could dig out the floor and break that area out, try to find the intersection with the waste pipe on the other side of that wall. Or you could use what’s called a “lift pump.”

So there are toilets out there that have pumps that are built into them that when you flush them – and you can spill the water waste from the sink into this, as well – it essentially activates a pump, it grinds the waste, it runs it up through a pipe and then it would go up into the ceiling and then cut across to the waste line and be dropped down from there. So that’d be less destructive. The mechanism is a little more complicated, perhaps a little louder than a typical toilet flush but they work very, very reliably. And they’re very often used in basement-bathroom situations where the toilet position is below the main waste line.

PHILIP: Well, no. The main waste lines – since the only bath is in the lower level, right next to where I want the half-bath to be – so the waste line is in the floor and it runs out to the south through and right out. And it goes right down into the sewer line outside. So I don’t – there’s no – it’s the same level. So I would really like to hook up to the existing line that is right next to the half-bath that I want to put in.

TOM: Yep. So I’ve got two words for you: jackhammer. You can break up that floor and connect with that line or like I said, you can go up over the wall and drop into the vent pipe, which will no doubt be in that same space. And then, of course, 8 feet below that connects with the waste line. So those are your options. I hope one of those works for you.

BathroomsPlumbingPodcasts Your Calls, Our Answers Podcast

How to Avoid Plumbing Emergencies

How to Build a Bathroom in the Basement

Transform Your Bathroom Without Ripping Out Plumbing, How To Dispose of Waste After a Remodel, How to Build a Block Wall, and more