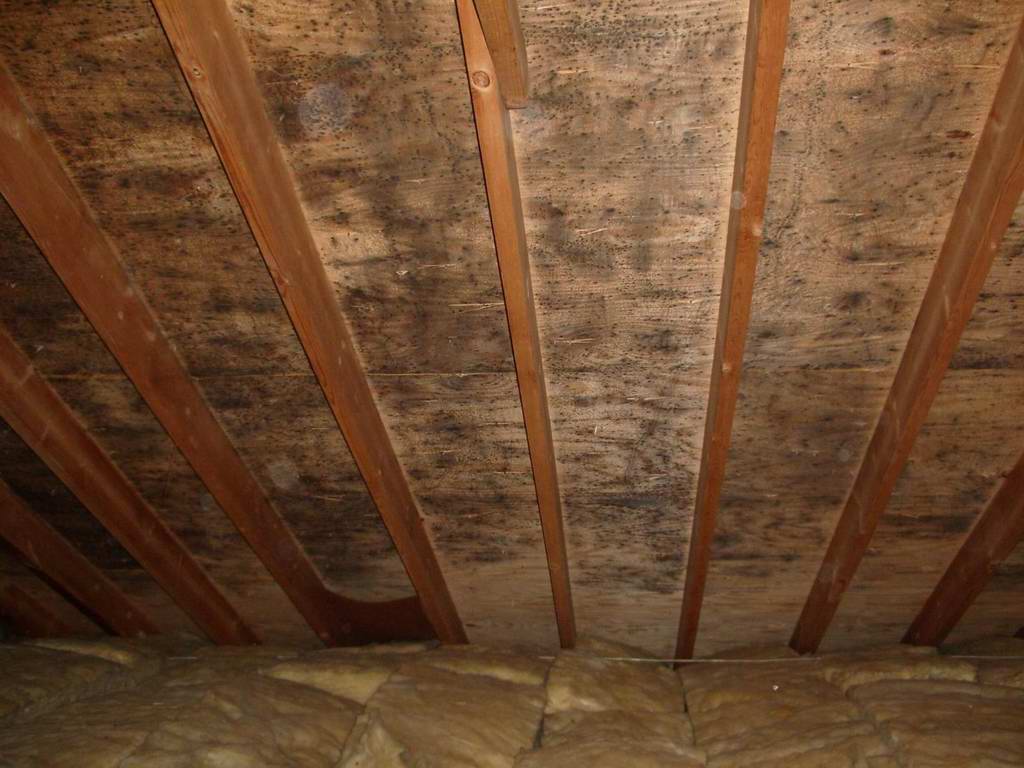 Causes of Mold in Attic and How to Repair

Home » Insulation » Causes of Mold in Attic and How to Repair

Causes of Mold in Attic and How to Repair

LESLIE: Cyl (sp) in Ohio has a question about mold in attic. Welcome to The Money Pit. How can we help you?

CYL (sp): I had recently put a new roof on a log-cabin house.

CYL (sp): And there was – it was previously a roof with a ceiling inside. So they put an addition on the side and part of the roof is now rafter roof, which is cathedral. And he is having problems with water underneath the decking. And I was curious – at this point, there is actually mold inside the ceiling of, you know, the old ceiling and …

TOM: From the leak?

CYL (sp): No, there’s no – there’s really no leak; there’s just condensation. And we’re trying to figure out what’s happening. We put everything …

TOM: Is there – so you have a – it sounds like you have a cathedral section and you have a section that is more of a traditional sort of attic kind of section, even though you don’t have much space there?

TOM: And you have mold in attic?

CYL (sp): And it is just since we put – we switched from shingles to metal.

TOM: That shouldn’t do it. But what will cause mold in attic is condensation that’s occurring in that space and the lack of proper ventilation.

When they put the metal roof on, did you maintain proper attic ventilation?

CYL (sp): There’s a tremendous amount of ventilation. I mean there’s baffles all the way down to the eaves and the eaves are vented from end to end. And that was – that’s also the case – he is actually a builder – a log-home builder – and when he built the new addition, he installed baffles from eave to ridge. And then he put in R-30 insulation underneath the baffles and then a 1×8 tongue-and-groove underneath that. And that’s the exposed ceiling. And he was having leaks coming from the lower section of the ceiling. And the water was coming out there and so …

TOM: This was before you put the metal roof on or after?

CYL (sp): No, this was after. We put the metal roof on in October and it only started here in January 2nd.

TOM: Did you have any ice dams?

CYL (sp): No ice dams. No, we have roof – we have snow guards and that’s holding the snow up there. But there’s really no ice dams.

TOM: So when you put the metal roof on, did they take the old roof off down to the deck? And did they use ice-and-water shield?

CYL (sp): Yes, yes. We put ice-and-water shield and we put a synthetic felt or a synthetic underlayment, what the metal company …

TOM: So let me ask you this: if it’s not a leak of the roof, is it possible that it’s condensation that’s forming in that space and then dripping down to cause mold in attic?

CYL (sp): Well, that’s possible but the question I have is: why is it condensating (ph) underneath the decking?

TOM: The decking – when we say decking, we’re talking about the roof deck, right? Just to make sure we’re on the same page here?

TOM: So the roof deck is very cold. If warm, moist air that gets into that attic space and it doesn’t vent, for whatever reason, and that warm, moist air condenses on the bottom of the roof decking – and you can see this if you can see that decking. Because, typically, you’ll see – not only will you get sort of a darkening of the plywood or whatever decking material it is, because that happens as the algae starts to grow, but you’ll also see rusty nail tips. And I’ve actually seen water dripping off the nail tips.

And all of those are signs of inadequate attic ventilation. And you say you’ve got plenty of ventilation, so it seems impossible that this should be happening. But I suspect that there’s something off with that ventilation. If you have continuous soffit vents and if those soffit intake vents are blocked in any way by the amount of insulation that you’ve put across the ceiling sort of floor, so to speak, or if the ridge vent is not fully open – because, typically, what would happen is you get a depressurization at the ridge, which would pull air out. And the soffit is where the air would go in. Now, if you also have gable vents on the ends of the walls, that can actually interrupt that flow of ridge-soffit ventilation.

But the reason it’s condensing and causing mold in attic is because you have warm, moist air that’s getting up there. And the other thing is if you have any gaps in the ceiling – could be around pipes, could be around light fixtures, high-hat ceiling fixtures, that sort of thing where you have warm, moist air from the house that’s getting up in there. And I’m presuming you don’t have anything really silly, like a bath-exhaust duct that’s venting up there. But you’ve got to identify the source of the warm, moist air and then you’ve got to figure out why the ventilation isn’t working. Because if it’s done correctly, it should be venting out that moist air; that’s how ventilation systems work.

CYL (sp): In the old attic, the only mold that’s creating is only the top 10 feet from the peak down. And if you’re standing up there in the attic, you can actually see through the baffles, all the way down to the eave. And the ridge is completely open.

TOM: It’s got to be wide open. I think it’s the Air Vent Corporation. It’s a CertainTeed brand. That they have a ridge vent that’s designed for asphalt shingles and metal roofs, that has a built-in baffle on the outside that actually improves the depressurization. There’s something wrong with that ventilation system. It shouldn’t be happening.

Good luck with that project.