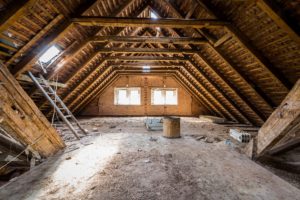 LESLIE: Ridge vent vs. attic fan? Scott in Georgia is on the line with a question about attic ventilation. How can we help you today?

SCOTT: Well, I have a house that has a ridge vent in it. And the temperature in the attic gets to be somewhere around 115 to120 degrees during the summer and it gets pretty warm. So, to help with some of the, I guess, the insulation and I guess, some of the heat up there in the attic, I want to put in maybe an attic ventilator to help assist with the removal of some of that heat, get more airflow up there. But my concern is going with a ridge vent vs. attic fan, if I do that with a ridge vent, am I going to pulling air from the outside in through the ridge vent into the attic only to be evacuated again by the power ventilator?

LESLIE: And generally you’re going to – I mean that’s exactly what’s going to happen. And then you’ll be also pulling whatever conditioned air from whatever leaks or spaces you have within the house into the attic space and then back out. So you’re kind of not achieving the attic ventilation you want there. However, you’ve got the ridge vent. Do you have soffit vents in play at your house?

LESLIE: And they’re not blocked by any insulation or …?

SCOTT: No, I’ve checked most of that. In some of the areas, I had to push the insulation down just to be sure there was a clear path. So, I would say, overall, probably maybe 90, 95 percent of it is unobstructed.

TOM: It sounds like you’re doing the right things. When was your house built, Scott? How old is it?

SCOTT: The house is about 10 years old. Now, it sits out and there’s no trees, there’s no shade or anything in the area. And of course, South Georgia, in the summer as we get 100, 110 degrees so …

TOM: Because the thing is, even though it’s getting hot in that attic space, it is at ambient temperature, so that’s kind of – you’re not going to get it much cooler than that if you’ve got unobstructed soffit vents, you’ve got good soffit ventilation on both sides of the house, you have a really good ridge vent.

Now, sometimes I see ridge vents that are not very open there, especially the kind that I see that are corrugated-looking like. They don’t let enough air out. So, it might be worth looking at the type of ridge vent that you have.

The CertainTeed ridge vents – the company’s called Air Vent or the brand is called Air Vent. I think it’s AirVent.com. You’ll see that they have these metal ridge vents that have a folded edge on one side of it. That actually depressurizes the ridge and makes it more efficient, in terms of pulling air to of it. So you may not be getting as much air out of that ridge vent as you would like to.

Do you have gable vents on the end walls, as well?

SCOTT: Yes. Actually, I do.

TOM: So that – if the ridge vent and the soffit vent are set up correctly, you actually don’t need those gable vents. They actually can tend to make that structure inefficient because it kind of messes with the attic ventilation. So I would look at the ridge vent that I have and make sure I’m getting plenty of air that is exhausting out of that. But as Leslie said, putting in an attic fan next to that is going to be like a dog chasing its tail. You’re not really going to be very efficient and it could pull up air-conditioned air from your house and actually raise the cooling bill.

SCOTT: OK. That was my concern. I was just kind of thinking about that in my head and going, “Gee, whiz, would that ever happen?” But OK, because I’ve seen some houses around here that look like they have an attic ventilator but then they also look like maybe at least part of the roof or a section of the roof has a ridge vent so …

TOM: Yeah. Well, there’s a lot of people that just do that because they don’t know what else to do. But the problem with attic fans is that your house has all types of little gaps in it that connect the attic to the inside that can hinder attic ventilation. Think about the framed wall and the outlet, for example. That’s an opening, right? And if your attic is depressurized, it’s going to want to suck air up from anywhere it can find. And that’s going to include the conditioned air – that expensive comfortable, conditioned air – that’s inside your house. That’s why passive ventilation is always a better option.

SCOTT: OK, OK. So probably a CertainTeed would be a good brand or a good type of ridge vent?

TOM: Yeah, take a look at AirVent.com and look at the one that’s called a Multi-Pitch FilterVent. It’s a metal vent – ridge vent – that sits on top of your roof and it has an air foil to the side of it. And I know that that air foil speeds up the depressurization and will make the attic ventilation much more effective.

TOM: It’s called a Multi-Pitch FilterVent and it’s in the Ridge Vent section.

AtticsInsulationPodcasts Your Calls, Our Answers Podcast

Don’t Install an Attic Fan If You Have Central AC

Attic Ventilation Solution: Use Soffit and Ridge Vents in Your Attic for Effective Ventilation

Tips for Converting Your Attic into Living Space

Attic Ventilation: Is a Roof Fan Worth It?

Attic Fan vs Ridge Vent: Can Both be Used?

Should I Replace An Attic Fan with a Ridge Vent?

Attic Ventilation: How Much is Needed

Ridge and Soffit Vents: You Always Need Both

Should I Get an Attic Fan?