You are here: Home / Locate Home Energy Leaks with a Blower Door Test

LESLIE: Well, if you feel like your home is super-drafty but you don’t know where those drafts are coming from, you don’t need to guess and possibly waste money repairing or replacing something that’s not really the cause of that problem. 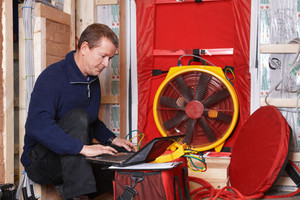 TOM: That’s right. Instead, you can turn to a professional energy auditor to get a blower-door test for an accurate assessment of exactly where your home leaks and what you need to do about it.

Richard Trethewey is the plumbing-and-heating contractor on TV’s This Old House and he’s actually been on site when a lot of these tests have been done.

Richard, tell us about it.

RICHARD: Well, they’re very effective. You know, people get lulled into thinking that their house is perfectly built. A house is made up of all your 2x4s and your walls. And now, inside the walls, you’ve got insulation, we hope, and you’ve got insulation up in the attic, we hope. But there’s also the issue of air that can pass even around the insulation or around any of the openings.

LESLIE: Richard, I think we’re talking a lot about what this blower-door test is and does but what exactly is a blower door? Is it exactly what it sounds like? Let’s explain that for people who might be confused.

RICHARD: Sure. You would open up any exterior door and leave it open. And then, in its place, you would install this frame and flexible panel. And that would be made out of a plastic or a polymer. But inside that frame is also a high-speed and variable-speed fan.

Now, what you do is you turn that fan on. It can go either way: you can pull air out of the house or you can push it into the house. But typically, you put it so you’re pulling air out of the house. Now, when you do that and put the house under negative pressure, now, anywhere that there is air passing through these openings, you can now see it where they use a little thing called a “smoke stick,” where you can go right up to it. And you’ll see that air just screaming inside.

Now, it’s not just that you used the smoke stick, though, because it has also a pressure gauge. So you’ll know exactly how much air is coming in. With this gauge, using this calibrated door, you can tell that there’s this many cubic-feet-per-minute of air leaking, in this case, out of the building. And this is so telling. Now, you can go around, when you do this, and you can – with caulking and sealant, you can go and plug those holes.

If you’ve ever thought about a house as a boat, you’d see so much water coming into this boat that you would have sunk. And this is a way to sort of seal that boat/house so it doesn’t sink, in this case. And it saves energy.

TOM: This can be very enlightening because, let’s face it: you maybe have a pretty good idea that your doors or your windows are drafty. But you may have no idea that that exterior light switch on an exterior wall could be letting in even more air than the window, right?

RICHARD: That’s right. I think people get fooled that – “Oh, my house is tight,” and it isn’t. There’s a couple of tools that tell you everything. One is this blower-door test and the other is – more people are using these infrared cameras to also see where that light switch is letting air pass through it, as well, because you’re going to see changes in temperature.

There are tools in our use and are available to us now that we never dreamt of before. We always just asked the insulation guy to come throw some rock wool up in the attic and hope that it was good enough. Now you can really tell, in a diagnostic way, what’s going on inside your building.

LESLIE: Is there a way to know, Richard, which is wasting more energy dollars: lack of insulation or the drafts?

LESLIE: It’s interesting. We just put in blown-in insulation in our home when we did a siding project.

LESLIE: And I kept asking – I was like, “Hey, now that we’ve blown this in, let’s do an infrared test to make sure that it’s actually in the places where you claim it is and it’s actually doing what it’s supposed to.” And all of the contractors that we had been talking to about the project were like, “Oh, no, no, no. We don’t do that.”

LESLIE: But I thought that should come with it, like, “Oh, look, we did your insulation. Let’s show you how well we did.”

Yeah, that’s no surprise. Unfortunately, they just want to dump it in there and hope it got to all those places. But let’s face it: a house has a lot of nooks and crannies.

TOM: And this technology really helps us identify exactly what’s going on. I think knowledge is key here.

RICHARD: Tom, there are powerful tools available to tell us about the building shell that we live in. And those two tools can tell you everything: blower door and infrared cameras.

TOM: Great advice. Richard Trethewey, the plumbing-and-heating contractor on TV’s This Old House, thanks so much for stopping by The Money Pit. Great advice, as always.

RICHARD: Hey, thanks. Great to be here.