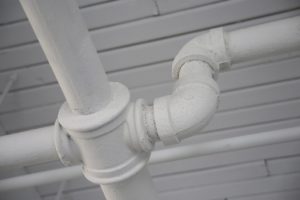 LESLIE: Elvis from Texas is on the line. He is in the building and he has a question about leaking Kitec plumbing pipes.

Elvis, what can we do for you?

ELVIS: My wife and I had a house built. Started back in early 2005 and it’s in Lubbock. Houses are made on concrete slabs.

ELVIS: Before they poured the slab, they put in a – with all the plumbing was installed. And instead of copper plumbing, which was in kind of short supply back in 2005, the going thing then was called Kitec. I think it’s K-i-t-e-c. And it’s a double-walled plastic pipe with aluminum in the center, instead of regular connections that use, if I’m understanding, a bronze connector. And we’ve had a couple of small problems with the plumbing but it seems as though I’ve read that the bronze can cause a delinkification (ph) in the copper.

And I’m wondering if there’s been any studies done, if there’s different fittings that can be replaced. If the plumbing has to be replaced, it’d be very labor-intensive to go underneath the house. And we get down to fairly low winters, maybe to zero, and I don’t think I’d want any plumbing overhead for it to freeze. Or if you have any suggestions or thoughts.

TOM: Yeah, Elvis. The problem with Kitec plumbing is, as you suspect, the fittings will leak.

Now, what’s interesting is that Kitec starts with PEX, which is cross-linked polyethylene which, by itself and as installed today, is actually an excellent plumbing pipe with fittings that don’t leak. But the Kitec system has definitely had a history of leaking. In fact, there are many class-action lawsuits over that product that are active and going on around the country. And you certainly should investigate those that you may qualify to join.

Unfortunately, your solutions only include, really, replacing the leaking Kitec plumbing pipes. And what I would advise you to do is to only replace it where it’s accessible. I mean I wouldn’t create the emergency if the emergency doesn’t exist, so I’m not going to tell you to tear open your walls and pull all the plumbing out and start from scratch. But I would say that if you do happen to be doing a bathroom renovation or you open a wall and you find Kitec, it should be sort of a matter, of course, where you always replace it. Because it’s not going to get any better; it’s only going to get worse.

ELVIS: Not news I wanted to hear but kind of what I suspected.

TOM: Yep. Unfortunately, that’s the case. Every once in a while, we get a building product like leaking Kitec plumbing pipes and I’ve seen it happen many times over the years. And there’s just no way to make it better because at its core, it’s a defective system.

ELVIS: OK. No way to just replace the fittings. It’s going to be the type that has problems.

TOM: That’s correct. So I would attach it to a plumbing – to copper piping or to traditional PEX piping.

ELVIS: OK. So I can talk with some local plumbers and discuss it from that point.

GeneralPlumbingPodcasts Your Calls, Our Answers Podcast

Steps to Having a Successful Open House, Weighing the Pros and Cons of Different Flooring Options, How to Fix Cracks in Walls

Save Time On Outdoor Cleaning, Go Natural With Your In-Ground Pool , and Keep Ticks – and Their Diseases – Away.