Tom Kraeutler:    This is the Money Pit Top Products podcast coming to you from the 2015 National Hardware Show in Las Vegas, Nevada. This is a fun show for us to cover, because we see a lot of cool gadgets, right? Gadgets and gizmos- 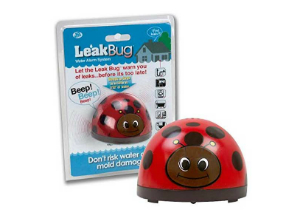 Leslie Segrete:    Lots of new interesting things, solving problems you probably didn’t even know you had.

Tom Kraeutler:    That’s right, but now you’ve got the tools and the techniques and the products to make those problems go away. We’re going to talk about one of those inventions right now with Jason Ross. Jason is from Leak Bug, and that’s a cool little product that just helps you know when you’ve got a problem, maybe in your basement, your bathroom, or your kitchen. Right, Jason?

Jason Ross:    Absolutely. Many people have leaks that they’re not aware of, as and we all know today, mold becomes a problem. If you have a small leak behind a washing machine that doesn’t really drip in front of the washing machine, damage can be done to your house without you even being aware of it.

Tom Kraeutler:    Describe Leak Bug, and tell us how it works.

Jason Ross:    Leak Bug is about the size of a half of a baseball. It’s got two water sensors on the bottom of it, and just the slightest bit of water or moisture will set off the piercing sound and let you know that you’ve got a leak somewhere.

Leslie Segrete:    That’s really smart. It’s a good opportunity, because sometimes you get these tiny leaks under your sink, and you don’t even realize that they’re happening until you reach to get whatever cleanser is in the super far back of the under cabinet, and it’s all wet and nasty. It’s really helpful to get into those areas you wouldn’t.

Jason Ross:    You’re 100% correct, Leslie. One of the things that I found interesting in doing research on this category is that water claims are on the rise. Most water damage, when it happens and people are aware of it, are a $20,000 fix, and that there’s five times more claims for water damage than fire damage with insurance companies.

Tom Kraeutler:    With water damage, speed is really a key. The faster you know you have a problem, the less the damage can incur.

Jason Ross:    That is correct.

Leslie Segrete:    How quickly will the Leak Bug notify you? How much water or moisture has to be there?

Tom Kraeutler:    It’s hardly wet at all. I’d say there’s very little. Will you get false readings, like from damp basements, for example?

Jason Ross:    We’ve not had that indication at any time. We do it as a puppy, and as a bug, so it’s cute. It’s not unattractive to have in your house. You wouldn’t be embarrassed to put it behind the toilet seat, let’s say.

Tom Kraeutler:    The average insurance claim for water damage is over $5,000, but the Leak Bug costs a lot less than that, huh?

Tom Kraeutler:    Thanks so much for being a part of the Money Pit Top Products pod.