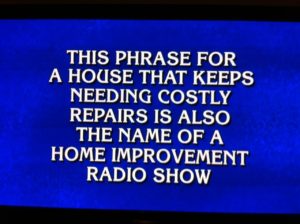 JEOPARDY Asks: What is The Money Pit?

JEOPARDY Asks: What is The Money Pit?

Tuesday night started out as a quiet evening here at Money Pit’s home base.  That was, however, until shortly before 8pm when just about every electronic device I own started firing off messages faster than leaves can fill a gutter.

The news was big: The Money Pit Radio Show was just used as an answer on JEOPARDY, a show that has helped to define pop culture for as many generations as TV game shows have been a part of our lives.  No we didn’t get it wrong, thinking it might have been one of those OTHER uses of The Money Pit, like a boat, the movie, or the island on the south shore of Nova Scotia, Canada, where buried treasure has been believed to have existed for over 100 years.  Nope..it was our radio show which was launched into JEOPARDY history as the answer to a $1,000 question, selected by contestant Justin Sausville and answered correctly by Alex Liteplo.

The question, read boldly as always by host Alex Trebek was:

“This phrase for a house that keeps needing costly repairs is also the name of a home improvement radio show.”

We work pretty hard around here, fixing our own roof leaks and broken garage door springs, while occasionally finding time to do the same for our faithful listeners on over 350 radio stations around the nation, and our super dedicated podcast audience.

And so, it was for just a moment that we circled around, virtually patting each other on the back for working at this long and hard enough for one smart JEOPARDY writer to actually write us into a show.

As our friend and consultant Holland Cooke said, “When your show is used as the answer to a question on JEOPARDY – you know you’ve made it!”

Perhaps, but for now – it’s looking cloudy outside.  I’d better get back to fixing those roof leaks.