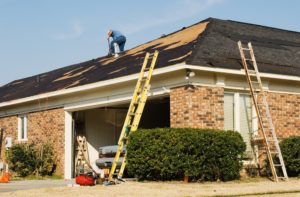 Is a Roof Leak Caused by Storm Damage Covered by Insurance?

Is a Roof Leak Caused by Storm Damage Covered by Insurance?

LESLIE: Steve in North Carolina, you’ve got The Money Pit. What can we do for you today? Got a roof leak?

STEVE: I’ve got a cabin way out in the woods here in North Carolina. And I built a bathroom onto it. And just years ago that I’ve done this. We put a flat roof over the bathroom and we had a roof leak during the last storm very, very badly. When I remove the tiles – and I used the pink insulation in the roof – what do I do?

TOM: So all that has to be torn out.

Now, you mentioned it was because of a storm. Is this cabin insured? Do you have a homeowners policy on this?

TOM: That storm damage should have been covered by your policy. Yeah, if you haven’t filed a claim, I would definitely do that because it’s probably covered.

Now, since you had such a bad leak, obviously, all that has to be taken out. So, you’ve removed the ceiling. You have to pull out all that insulation. You need to wear appropriate breathing protection when you’re doing this and try to control that area. Because with all of that mold, you don’t want to get it into the house, right? So, that’s why it’s kind of a job for a pro.

TOM: But if I was doing it, I would depressurize the room I’m working in so that there was good ventilation and everything was blowing out, right? So, I would make sure that I managed that. Pull out all the insulation. You’re going to need to spray down all of the inside surfaces with a mold inhibitor. There’s many good commercial products on the market that do that. And you’re going to have to replace that roof.

Now, you said it was a flat roof. That’s the least favorite type of roof, I would say, because if there’s going to be a leak, it’s going to happen a lot quicker on a flat roof than any other kind of pitched roof. But you’re going to have to replace it.

What kind of material did you use? Did you use roll roof on it?

STEVE: We did. And see, that was my mistake.

TOM: Yeah. Roll roof is not designed for flat roofs. Roll roof, you’ve got to have at least about a 2/12 pitch for it to work right. And so, you really need to use a rubberized bitumen or something like that.

But choose a material that’s designed for flat roofs when you replace this. But I think you know what’s ahead of you, Steve. You just needed me to say it. You’ve got to tear it all out. And listen, if you can get coverage because of the storm, maybe it won’t cost you as much as it might have, OK?

Will Home Insurance Cover Leaky Roofs? What You Need to Know

Spring Storm Damage? Here’s How to Make Your Insurance Company Cover the Repairs

Is Your Home Covered for Disaster?

How to Find and Fix Leak in a Flat Asphalt Roof

Flat Roof Repair or Replace Due to Leaks

Leaky Roof? The Roof Pitch Could be the Problem!