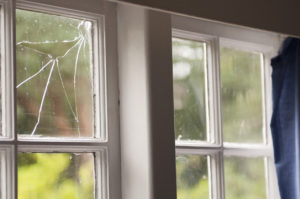 LESLIE: Samantha in New York is dealing with some chilly, uninsulated windows. Tell us about the problem.

SAMANTHA: I live in a home that’s about 100 years old and it has the original windows in it. And all my air, hot or cold, seems to leak out and in the winter time it gets really cold. So I’d just like to know what I could use to better insulate my windows.
TOM: So my guess is they are single-pane glass.
SAMANTHA: Yes.
TOM: Do you want to replace them with replacement windows?
SAMANTHA: No, I’d like to keep the original windows because, like I said, the house is over 100 years old.
TOM: Alright. OK. Well, couple of things. In the chillier seasons, one of the things that you could do is actually caulk your windows shut. And the way you would do that is with a product called temporary caulk. There’s a number of manufacturers that make it. One of the products is called Seal ‘N Peel.
LESLIE: Mm-hmm, by DAP.
TOM: Is that the DAP product? Yeah, and I think Red Devil has one, too. And basically, the way temporary caulk works is it allows you to sort of caulk the windows shut the same way you might be putting normal caulk on it but the key is that you can peel this stuff off in the springtime when it gets really warm and then use the window normally.
LESLIE: Yeah, but you’re probably also losing a lot of that heat and energy through the glass itself because there’s no insulating factor to that single pane. Do you have storm windows?
SAMANTHA: No, they’re just the original. They’re really tall and they’re like four panes tall.
TOM: Yeah, that’s another issue. I mean if you don’t have storm windows, it’s always going to be super-cold and the only other thing you can do beyond that is try to weather strip it and also put on some heavy drapes. But single pane glass is single pane glass and there’s nothing that you’re going to do that’s going to make that any warmer short of a major window project here.
LESLIE: Can you retrofit an existing window to have a track on the exterior for a storm window?
TOM: Yes. A storm window can mount to the exterior surface of that window and provide that level of draft-proofness.
SAMANTHA: Alrighty.
TOM: Alright? And if all else fails, wear a sweater. (Leslie chuckles)
SAMANTHA: (chuckling) Yeah, I’ve tried.
TOM: Samantha, thanks so much for calling us at 888-MONEY-PIT.
SAMANTHA: Thank you.
GeneralPodcasts Your Calls, Our Answers Podcast

Winterize a Rental for a Cozy, Efficient Season Indoors

Stop Window Drafts in an Apartment

How to Seal Out Window Drafts in Winter