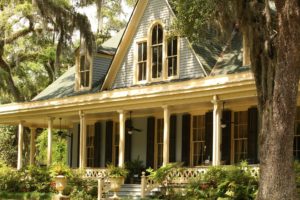 How-to Stop Trees from Taking Over Your Yard

How-to Stop Trees from Taking Over Your Yard

LESLIE: Ashwani in Illinois is on the line with a tree crowding question. What’s going on?

ASHWANI: I have seven or eight trees in my backyard, which are pretty tall, like 30 to 40 feet. And they’re close to my house. I have been seeing that their roots have started showing up on the ground. I don’t know if it was because of the drought or what, you know, in different kinds of trees: crab, white ash, crabapple. I’m just wondering, is there something I can do to fix it or I have to get – start getting rid of them? Because if they get weak and they fall, then they might fall on my house.

TOM: Well, first of all, this is Mother Nature’s way of growing these trees and the tree roots. And no, there’s nothing you can do about tree crowding. If the trees are healthy then, of course, the risk of them falling on your home is certainly reduced. Anything could happen in a storm but I tell you, I’d rather have tree crowding around my house and take a chance on one falling down in a storm than not, because they’re just so beautiful and they have so many energy-efficient benefits by keeping the sun away. Now, if they’re very crowded, you may consider thinning them out. Sometimes, you have to take out one tree to make room for another. It’s a project I did myself about three weeks ago. I had planted some trees when we first moved to our house over 20 years ago. And it turned out that one of them, I felt, was really sort of taking the sun away too much from another and causing it to stunt. And then it became damaged by woodpeckers, so I just decided to take it out. And now, that tree that’s next to it is doing much better. So, sometimes, you’ve got to thin things out in order to give the remaining trees – maybe the ones that are in the best shape or the ones you like to look at the most – a better chance of surviving and thriving. So, I think this is really just sort of a management issue. I don’t think there’s anything wrong with what you’ve described. It doesn’t give me any pause that you’re going to have a lot of risk of damage to your house. Like I said, as long as they’re healthy and as long as you are keeping an eye on them and making sure they stay that way and as long as they’re not growing too terribly close to the house – I mean roots that are within 2 or 3 feet of the house can cause foundation issues. But if we’re talking about tree crowding that is just in your backyard, I think that you’ll be OK just the way it is.

TOM: And if they’re that close to the house and if they’re really tall and really heavy, then you may want to think about thinning them out, OK?

ASHWANI: Yeah. Thank you. Thanks a lot.

Plant a Tree for Arbor Day!

Upcycled Garden? How to Grow Fruits & Veggies from Pits & Seeds

How to Transplant a Large Tree