How to Stop Vinyl Siding Leaks

How to Stop Vinyl Siding Leaks

LESLIE: Well, it’s one of the biggest fears a homeowner faces: the telltale water signs that let you know you’ve got a leak somewhere. But the trick is determining where that leak is coming from so you can deal with it. 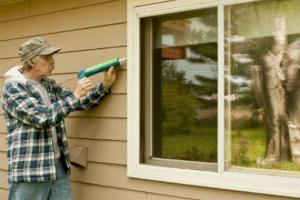 TOM: This Old House general contractor Tom Silva has handled many a leak in his day. And he’s here now with tips on identifying and fixing a very common type of leak, one that stems from leaking vinyl siding.

TOM: So, is vinyl siding any more or less leaky than any other type of siding?

TOM SILVA: Well, vinyl siding, like all siding, should be installed correctly so that it doesn’t leak. It’s the raincoat that covers your building. If it’s got a hole in it, you’ve got a problem.

So I guess the first issue is trying to figure out where it’s leaking and perhaps ruling out other types of leaks that could be causing this?

For example, if you’ve got a stain in the ceiling, is there a bathroom up there?

LESLIE: Yeah. But I feel like with water, you know, it always seems to follow the path of least resistance. So, you could have a leak one place and the stain could shop up somewhere completely opposite of that. So you’ve got to be a detective.

TOM SILVA: Very true. Water will find the path of least resistance if – for example, it will just run down and then when it wants to exit, it will.

But you want to try to rule out things. And ruling out the bathroom or the window or the roof is the starting point.

TOM: Now, the other issue with water is it could be wind-driven, so it may be one of these types of leaks that just shows up when the rain is blowing in from the north or something.

TOM SILVA: The right direction, yeah. And it’s true: it is a lot – that happens a lot. That happens a lot. I mean a house that’s built in windy conditions can leak more in the sidewall than it can – because you have to build that house differently.

TOM: Alright. So you know you’ve got a leak; you’re pretty sure it’s on, say, one particular side of the house. What is your first go-to place to look for a leak? Where is the weakest link? Is it around a window? Where?

TOM SILVA: Alright. It’s a vinyl-sided house and there’s a leak and the stain is on the first floor. The first thing I look at is the room location. Then I go outside and I look at the room and the window location upstairs. And then I think, “OK, I know where that stain is. There’s a window down here, there’s a window up there and I know that that’s where the stain is, right below the second-floor window.”

TOM SILVA: So then I get a ladder, I go up there and I find out that the J-channel hasn’t been connected to the trim channel correctly. So, when I say that, it means that a good siding job is caulked behind the J-channel, where it meets the trim.

TOM SILVA: And you want to make sure that you use the right type of caulking. You want a caulking that could be a butyl caulking, it could be a tripolymer caulking, polyurethane, something that will stick and expand and contract like the vinyl.

TOM: Yeah, let’s talk about that J-channel, Tom, because that really is a critical area for vinyl siding. If you get it wrong, it’s going to leak.

TOM SILVA: Absolutely. And that J-channel actually looks like a letter J and it goes around all the trim, like your window or your cornerboards or wherever you’re going to end that siding. You have to hide the end. The reason you have to hide the end is because that siding is going to expand and contract. And that joint at the end of the siding, where it meets the window, if you don’t have a J-channel, it’ll open up.

TOM: Yeah. And that’s the key because vinyl, unlike other sidings, does have a pretty big range of expansion and contraction.

TOM SILVA: Around the window, that J-channel is the covering to allow for the movement of the siding. The siding also has an overlap of the joints in the field. And that joint in the field should be covered by about an inch-and-a-half. That’s a big deal. That allows for it to really move a lot.

So if those things aren’t done correctly, the siding can leak, with the right conditions.

TOM: Now, because siding is assembled from the bottom up, does repairing it really require you to disassemble from the top down?

TOM SILVA: You can go anywhere you want on a siding wall. It’s the easiest product there is to repair, replace or tighten up. And it’s done with a zip tool. You just go in there and snap it free, pop the siding off and do your correction.

TOM: So the zip tool, essentially, unzips the siding pieces wherever you want?

TOM SILVA: Yep, yep. You just start at the joint. You put the zip tool up there. It’s just a little hook. You pull down on the siding, slide it by and the siding pops off. You then pick up the siding, pull the nails from the sheet below and snap them down.

LESLIE: And does that damage the piece that you’ve taken off in any way? Or can you reuse that piece in its original place?

TOM SILVA: You can reuse that piece, absolutely.

TOM: Now, sometimes when we’re looking for a leak, we may try to reproduce it by using a garden hose. Do you ever go that far?

TOM SILVA: I have gone that far, usually on a roof but not on a sidewall. Because you can usually spot it. If the siding isn’t nailed correctly, it’s too loose. A lot of people put siding up and they may put one nail every 2 or 3 feet, because they figure it’s not heavy. Well, it’s not correct. The siding is too loose off the wall and they don’t allow enough for the movement of the siding. Or they allow too much for the movement of the siding and it’s too tight.

TOM: So the flip side of that is you could nail it too tight and then the siding sort of buckles. And I guess that could open up gaps for leaks, too.

TOM SILVA: Absolutely. What I meant by it’s too tight, it can also push against the J-channel, causing it to form. Now, the J-channel is the channel that goes around any trim: windows, doors, cornerboards, whatever.

TOM SILVA: And it has to be done correctly. So, like I say, a good bead of caulking behind that J-channel is very important.

LESLIE: Now, if we’re looking for a roof leak, obviously it’s going to be on your top level on the ceiling. But have you ever seen the water sort of travel to a wall side to sort of make it a little bit more tricky to indicate that it’s the roof?

TOM SILVA: I have seen a roof leak on one side of the roof go all the way to the middle of the house. And it’s amazing that the water will just come in. It actually was blown in on the – near the top of the roof, on the gable end, underneath the shingle. And when the wind was right, it would blow the water under the shingle and it would just follow down, like a set of stairs, on the shingles and get right into that. And it would leak always in the same spot.

TOM: So you really have to be quite a detective to figure out exactly what the source of this leak is. It’s easy to know where it ends up. But getting to the source, that’s an entirely different matter, which we are so pleased that you’ve been able to come and share that with us today.

Tom Silva, the general contractor on TV’sThis Old House, thank you so much for stopping by our money pit and teaching us how to keep it leak-free.

TOM SILVA: It’s always nice to be here, guys. Good to see you.