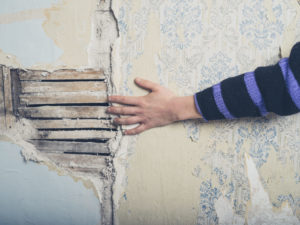 LESLIE: Well, long before we had walls made of drywall, plaster was the material of choice for your wall and ceiling construction. But often, in older homes, you find settling and that allows cracks to form in the plaster.

TOM: Yep. And when that happens, just painting over the cracks really solves nothing. And tearing off all the plaster to redo, well, that can be time-consuming and not very economical. But there is a way to repair plaster walls. Here to tell us how is Tom Silva, the general contractor on This Old House.

TOM SILVA: Thank you, guys. It’s nice to be here.

TOM: Now, you’ve worked a lot with plaster over the years. Do you have some maybe trade secrets to share with us?

TOM SILVA: Yeah. The old lath and plaster does crack over time. It cracks from settling and it cracks from moving and it even cracks from temperature changes – rapid temperature changes. But to patch it, you can actually reattach it to the lath. And there are systems that can do that where you actually go with a little, tiny masonry drill and you drill a series of holes along the cracks or anything that is lifting out. And then you inject this material into each hole with one squirt. It’s like a primer that you put into that hole.

TOM: Now, that lath is a wood strip, right? And when they build these walls, they nail up the wood strips first and then put the plaster on top of it?

TOM SILVA: Right. And the laths are put on. When they’re put on, they’re wet. And then when they’re – they’re also spaced so that when you put the wet plaster onto the wall, it squeezes between the joints. And the reason it’s wet is because that way the wood and the plaster will dry simultaneously and the wood won’t cause the plaster to dry if it takes all the water out of it.

TOM: Now, do you guys ever repair walls or replace plaster walls in the traditional way that they were done, you know, back in the 20s and 30s?

TOM SILVA: Oh, yeah, yeah. Many times. When the plaster comes off the wall, away from the lath, sometimes we break out whole sections and replaster it with a base coat. And we’ve even used the horse hair. It’s really goat hair that we use because it holds up better than the horse hair.

TOM: Can’t get the horse hair that much these days, huh?

TOM: What aisle in the home center is that carried in?

LESLIE: And would you reuse the lath at that point? Or do you reinstall …?

TOM SILVA: You don’t take the lath off. You don’t …

LESLIE: So that doesn’t ever rot or change because of all the moisture from the plaster in the initial install?

TOM SILVA: Right. No. The plaster lath will dry right – not right away but in the process. When you were plastering the house years ago, the house would be pretty wet. And then as the wood dries, the plaster dries and it would really cure. It’d be really nice. But sometimes today, we’ll even take the plaster and break it away from the lath. If people don’t want to spend the money to do it the old-fashioned way, we’ll actually go over it with the 3/8 wall board and then blend it in that way.

TOM: Now, I did a remodeling project in my house across several rooms. And the first room, I thought, “Hey, let’s just tear off all the old plaster and lath.” And of course, you know it’s like a war zone when you’re done. There’s dust and dirt and debris everywhere.

TOM: And then I’m like, “Well, let me try this drywall-over approach.” It just was so much easier, so much cleaner.

TOM: I was like, “Why did I do it the other way?” Because also, when you take off all the old plaster and the old lath, you often find that the studs don’t line up very well. And with plaster, because it’s wet, you can adjust for that.

TOM SILVA: You can adjust for that.

TOM: But when you put additional drywall on it, you’ve got all sorts of bellies and uneven areas to deal with.

TOM SILVA: Right, right. Well, the old plaster – when they did it, they put the lath on the walls around the perimeter of all the doors and windows, along the baseboard. They used what is called “¾-inch grounds.” And that was a screed for them to basically level the plaster off when it came to windows and doors so they could make it straight.

TOM SILVA: Well, the difference is that the plaster will blend right into it. But I really prefer to use – when I’m trying to patch a plaster that has a crack, I would actually prefer to use joint compound. Joint compound will stick to anything, will span the gaps. Sometimes, if this gap or the crack is big enough, you may want to put a netting over that crack, like a mesh tape that you would use in joint compound or plastering.

TOM SILVA: And that spans that crack and lessens the chance for it coming back.

LESLIE: So, Tommy, once you’ve put all this adhesive into the holes, what’s your next step? Do you have to clean things off? Do you have to tighten it together? How does it work next?

TOM SILVA: You’re right. You need to reattach the plaster to the lath. And in the kit that you get are actually these big, plastic washers. And they are actually like a clamp with a screw in between it. So when you put a screw through it and you screw through the plaster, you’re actually pushing the plaster back to the lath. When you do that, the excess glue will ooze out of the holes. Now, you have to wait 24 hours for the glue to dry. Once it’s dry, you remove the plastic washers and then you scrape the wall with the trowel and then skim it with joint compound.

TOM: Got it. Tom Silva, the general contractor on TV’s This Old House, thanks so much for stopping by The Money Pit.

LESLIE: Alright. Catch the current season of This Old House and Ask This Old House on PBS. For local listings and step-by-step videos on many common home improvement projects, visit ThisOldHouse.com.

How To Fix Cracks in Plaster Walls?

How to Hang a Heavy Picture

How to Repair Cracked Plaster Ceiling