How to Keep Your Septic System Working Properly

How to Keep Your Septic System Working Properly

LESLIE: So it’s not a homeowner’s favorite thing to do but if you’ve got a septic tank, taking care of it is crucial. Otherwise, you will have a giant mess on your hands. 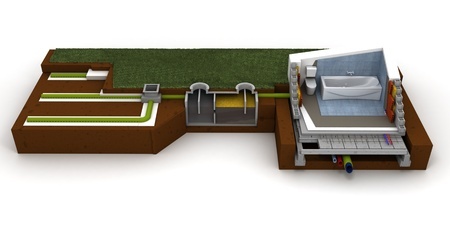 TOM: Well, that’s possible. And here with tips on how to keep your septic system happy is Richard Trethewey, the plumbing-and-heating expert for TV’s This Old House.

And is this the first time you’ve ever had happy septic systems and your introduction in the same sentence?

TOM: You know, it is the kind of thing that we like to have out of sight, out of mind. But there could be some signs that a septic system fails. What are we looking out for?

RICHARD: Well, if it’s going to fill that front lawn or wherever the septic system is because it’s no longer going to perc through the ground.

TOM: When you say “perc,” you mean absorb, right?

RICHARD: Maybe you should do a little definition that …

LESLIE: Yeah, explain the whole process because I think a lot of people get confused.

RICHARD: OK. So, when the plumbing leaves your house, it’s going to have liquids and solids in it. It’s going to go into a septic tank. And those solids want to remain in that septic tank. And then natural bacteria, fed mostly by oxygen, will break down those solids into a liquid. And then the liquid will continue on through a thing called a “leach field,” which is a series of horizontal pipes perforated, that will be below the ground. And then the remaining water should just be able to drip gently down through the aquifer and down into the ground. And properly used, meaning not overused, not …

RICHARD: Absolutely. The natural – and depends on the ground that you’re going into and its ability to hold water.

RICHARD: These systems can run and run and run and never have an issue because that bacteria keeps on breaking down the solids and keeping things running. But they can fail and when you do, it’s a crisis. Dig up the whole front lawn. It’s a major impact. You’ve got to call the local health authorities to be sure you can do the new one and everything else, so it’s a big deal.

So, people that have it – I think 25 percent of American houses have some form of septic system. And you just want to be careful of what goes down the building – down the pipes. You never want any paints or solvents or anything that could ever touch that bacteria. That bacteria has to be – stay in that tank to stay hungry. And if you do anything to kill any of the bacteria, all of a sudden you’ve got an issue and you’re going to have to dig it up or clean it up.

TOM: Now, I’ve seen systems where they’ve actually split off the gray water in the house, which is the non-sort of sewage water – water, for example, that comes from the washing machine, where you tend to have a lot of bleach.

TOM: And they’ll put that into a different type of field than the septic and that – the purpose of that is to keep that septic field alive and keep that tank alive and the bacteria alive so it doesn’t have an adverse effect?

RICHARD: Yeah. There’s certainly a better chance of that. It’s all – they do it for two reasons, gray water. They also do it to save water and use it for creative reuse. We did a story in San Francisco some years ago to take the water from the laundry and go out to a nice, beautiful garden out back.

I thought gray water would be a bigger story than it has been. I think, in so many parts of this country, water is not expensive enough yet.

LESLIE: But is gray water also shower water and when you’re washing your hands?

RICHARD: Yeah. Yeah, yeah. And so, really, the only thing that’s going to go out in the septic system would be the toilets in the building. And there’s some merit to that, that you could just keep that material going into that septic tank and you know that bacteria will keep running.

TOM: Now, when it comes to pumping septic tanks, that’s something that we hear very common.

TOM: There’s folks that recommend they be pumped every so many years.

TOM: Do you think if it’s – everything seems to be working fine, you can just leave it alone? Or do you think it’s a good idea to occasionally open the tank and pump it out?

RICHARD: I don’t know. I wouldn’t recommend to proactively pump it out unless there was an issue.

RICHARD: Because if that bacteria is running – I don’t want to get the septic lobby mad at me. But if that – if you’re using it – using the septic system and you’re not overtaxing it and the water is percolating down through the ground and you’ve – that bacteria stays running, it should last for a long time. It should keep running. It’s sort of self-maintaining.

But when it goes bad or when you’ve got a building that’s being taxed – too small of a septic system for too many fixtures inside the building – that tank won’t be able to handle it. And then you call the pump guys and get it pumped out and start again.

LESLIE: Now, what happens when you do an addition like, say, you’re adding a master bath? Will that be accommodated by the existing septic system or at that point, do you have to figure out another way?

Richard, the system designed for septics hasn’t changed a lot in the last 20, 30, 40 years. Are there new systems out, coming out today, that are more efficient in one way or another?

RICHARD: Absolutely. This year, on This Old House, we went down to a test facility for alternative septic systems. And the race is on to find alternatives to the standard septic system. Historically, it was either a cesspool, where you just dug a big pit and dumped it. Then around the post-war era, septic systems were the rage.

These alternatives are quite interesting. We’re going to do a story this year about a self-contained sewage treatment plant that can go into any house. So now, imagine that there is no leaching field and there is no septic system. Everything happens inside a series of tanks where liquids and solids come in …

LESLIE: Which are stored indoors or …?

RICHARD: Indoors. In this case, it’s above ground. And so, goes into the first tank and the solids remain. They add oxygen all the time to sort of keep that bacteria really fed and happy. And then you go through a series of tanks. And by the time you come through the last two tanks, it goes through this membrane that’s so fine that only water molecules can pass through this membrane. And what happens is that the water is so clean on the discharge, it can be consumed; it could be drunk.

RICHARD: So it’s – in the scene we just did, it’s quite an interesting …

LESLIE: Do you take a big swig of water?

TOM: Right. Sure. That’s really interesting. So, there’s a lot that technology is offering us moving forward in the future.

TOM: And we may completely, potentially eliminate the need for the septic tank and the septic field, in the traditional sense, outside the house.

RICHARD: Right. Right. You know, we’ve got millions and millions of lakes in this country and there’s all – everyone wants to have a lakefront property. And there’s a real issue there. How do you let people live near the lake when their septic system could then leach into it? So these alternatives have great promise for those places, where you can protect that natural resource of that beautiful lake but still let everybody live.

TOM: That’s great. Richard Trethewey, the plumbing-and-heating expert on TV’s This Old House, great advice. Very interesting. Thanks so much for stopping by The Money Pit.

RICHARD: Great to see you.