LESLIE: Well, by their very nature, household plumbing systems process a lot of – let’s be kind – just smelly stuff. Well, the good news is that we rarely smell those stinky odors unless something is wrong. 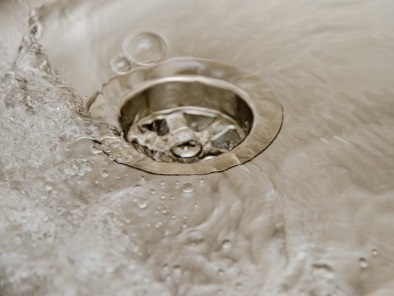 TOM: Plumbing odors can range from a sulfur, rotten-egg smell to a downright disgusting sewer-gas stink. And figuring out the source of those smells can be tricky but not if you know what to look for.

This Old House heating-and-plumbing expert Richard Trethewey joins us now with some advice on sniffing out the problem.

RICHARD: I am on the case, people. I’m ready.

So, plumbing odors are a pretty common problem and they’re usually not all that difficult to fix. Where do you begin?

RICHARD: Any drainage system is carrying water down to a sewer or to a septic system of some sort and really, by design, the smells that are inside that pipe and inside that vent. But what most people don’t realize is that there is a vent system that continues from that drain, right up inside the house, right out to the outside and above the roof. And then there are always supposed to be traps on every single plumbing fixture.

Now, a trap is a simple device. It has water in it so that it doesn’t allow any of those sewer gases to leak back up into the house. And as soon as you have a trap that isn’t working correctly or the water is gone from it, you’ll smell that unbelievably pungent sewer-gas smell. And that’s not safe; it’s not good to let that into the building at all.

TOM: So one of the most common sources, then, of plumbing odors is that trap. Perhaps the trap dries out or maybe it wasn’t ever built right to begin with?

RICHARD: Well, if the trap leaked, you’d see water on the floor. What often happens is the trap evaporates. You know, the kids have gone off to college 25 years ago; that bathroom hasn’t been used in all that time. Now the trap is now evaporated and so now you’ve got raw sewer gas coming back up through. And that’s quite often what the issue is: just a lack of a trap seal.

But we’ve also seen traps that can lose their seal because the wind is blowing so extraordinarily over the top of the building, pushes down through the plumbing stack – the vent stack – and actually makes the water level bounce in the trap enough that it sort of comes back into the drain. And all of sudden, you’ve got just enough gap there for sewer gas to leak up through. And so those are the two most notable places we see. A leak on a trap, you’d generally see on the floor and you’d notice it and need to get it repaired.

LESLIE: Now, the trap seems like one place where you’re going to get these faulty odors from. But what other parts of your plumbing system could fail that you might not know about until you start to smell something?

The other thing we often get complaints about is just the smell of urine around the toilet. And that is generally delivered to you from teenage boys missing.

RICHARD: That’s right. So, that’s another source of it.

But you also can get plenty other smells in the water system, the plumbing system. We get complaints from people saying, “It smells like rotten eggs when I run the hot water.” And that is that inside of any tank-type water heater, you’ve got an anode rod inside there that sort of acts as a sacrificial rod. And once that fails, the net result that inside that tank is that you’ve got this sulfur discharging into it that gives you these unbelievably pungent rotten eggs. And you swear that it’s just terrible rotten eggs. And so that means your water heater is ready to leak, if it hasn’t already.

TOM: Now, Richard, one of the places that is a bit tricky to diagnose is the drain, because it may not always have to do with a trap that’s dried out. Sometimes you can get bacteria that forms in any wet place and that can give off a gas, correct?

RICHARD: Yeah. I mean any place you could have standing water in warm applications is a breeding ground for bacteria and mold and stuff like that. So, we’ve heard complaints about people that have the overflow on their vanity sink – the lavatory sink can just give a little smell in there. It shouldn’t be dramatic but it’s still another place.

Any place that you can have standing water sitting for any length of time in a warm climate can be a breeding ground for bacteria. Use your nose. You’ll find it.

LESLIE: What about your garbage disposer? That’s got to be a source of a lot of stinky things, as well. Is there anything that you can do to sort of avoid that or …?

RICHARD: Think about what that poor disposer has to do, Leslie. It has to grind up every bit of the foodstuffs and it throws it against the sides of the inside of the disposer. And if you don’t run water and flush it out, it just can cake on the inside.

So, we often tell people to just put lemons down in there and let them grind up. And that will sort of give a bit of a citrus clean. There’s some enzymes we’ve had people use. These enzymes are pretty interesting. You put them down and they eat anything organic, so it actually can clean the inside of that disposer well. You look down in it and it’s like somebody got down and buffed it. It’s cleaning it all up, so …

RICHARD: Yeah, it’s pretty interesting. So, lemons are enough. Just lemons or oranges, something that can sort of get in there and scour some of that foodstuff that’s been built up. And when you throw the skins of the lemon, it’ll actually clean it up a little bit.

TOM: We’re talking to Richard Trethewey – he’s the plumbing-and-heating expert on TV’s This Old House – for some tips on how to diagnose and fix plumbing odors.

Richard, we talked a lot about inside the house. What about the smell that’s outside your home? Can a leak in a waste line or a problem with the septic system be the cause?

RICHARD: There are some tragic stories of septic systems that fail and all of a sudden, the whole front lawn is filled with smell and liquid. And so, yeah, somebody …

RICHARD: It’s generally the night before the big wedding or it’s always the worst time.

RICHARD: But yeah, it can be awful.

A septic system is a delicate bacteriological laboratory. You’ve got to have the right amount of water, you’ve got to have bacteria in there breaking down foodstuffs and organics and keep it working. And as soon as something gets in there that messes that up, that septic system can become a nightmare. And if you don’t have bacteriological action eating up that organic stuff inside, it builds up, builds up, builds up. It’s not going to go out through the drain and all of a sudden, it’s flooded your front or back lawn.

TOM: So, Richard, avoiding these odors, it’s all about the one-way street, right? You want the water to flow down but you don’t want anything to come back up. And if you can keep it all going in that direction, no problems, right?

RICHARD: Yeah. Look first and foremost at the traps, meaning every fixture has to have a trap. And just move around the building and start, you know – I wouldn’t be the right guy to send around. I have no nose. I think being a plumber this long, I don’t smell anything anymore. But you can generally find it using your Sherlock Holmes hunt-dog approach. And it’s generally going to be in the trap.

TOM: Good advice. Richard Trethewey, the plumbing-and-heating contractor for TV’sThis Old House, thanks for stopping by The Money Pit.

RICHARD: Great to be with you.