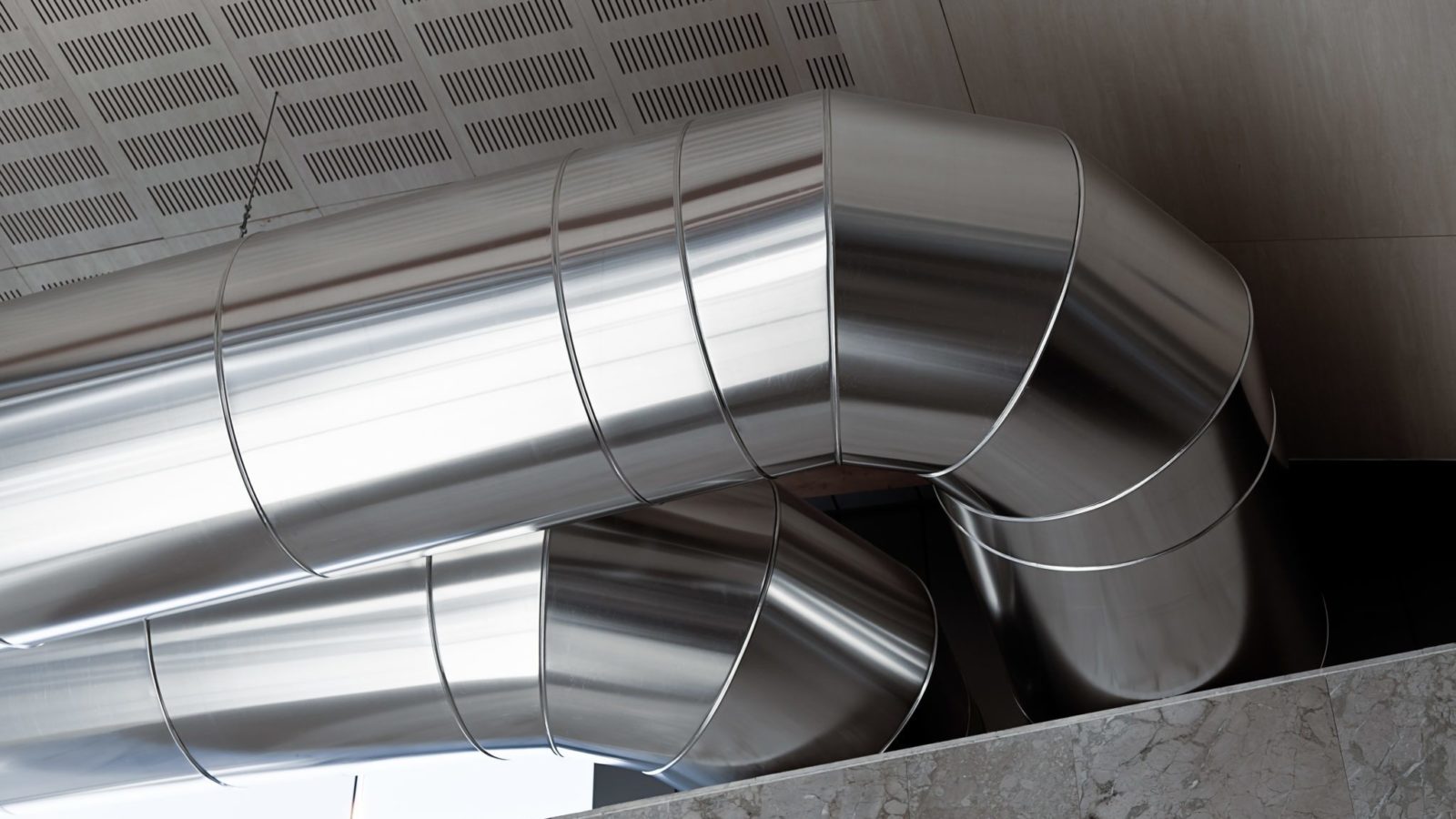 Home » How to Fix a Noisy Forced-Air System

LESLIE: Well, bangs, whistles and shrieks may sound much like a fireworks celebration but when those sounds are streaming from your heating system, not so much.

TOM: That’s right. And especially when your system is the type known as forced hot air. For repair advice to help quiet a quirky system, we’re now joined by Richard Trethewey, the plumbing and heating expert for TV’s This Old House. 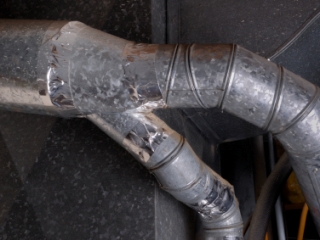 RICHARD: Hello, guys. Nice to be back in the pit.

TOM: So tell us a little bit about how a forced-air system works so that we can understand where those noises are emanating from.

RICHARD: Well, it starts with a furnace somewhere, maybe one or more furnaces in the house. And it sits and it has a burner in it and it has a fan to push the air across the heat exchange or the place where you burn that fuel. And now, the heater there now goes up through ductwork. And the ductwork starts big, down at the unit, and it gets smaller and smaller as it goes through the building.

Now, that ductwork, it’s sitting there, it’s cool when you first turn the thermostat on in the winter and it’s sort of relaxed. And now you turn – put a bunch of hot air in and that fan is sort of filling the balloon, which is the ductwork.

RICHARD: So you can get a series of noise. One, you’ll start maybe hearing noises out of the ducts, the connections, the joints, because they might not be tight together. So you’ll hear a little whistle there. But you also can get this thing, this oil-canning, this sort of boomp-woop (ph) where the whole thing bubbles up and you can hear the metal almost expanding as if somebody has popped a can, so to speak. You know, it’s a weird, metallic sound that people know – people that have it know and …

RICHARD: Yeah. And it comes every single time that the thermostat calls and it can be really annoying, sort of – it sometimes is reassuring to people. I mean they know (inaudible at 0:21:57).

TOM: They know the heat’s on.

TOM: And because they’re metal ducts, it resonates throughout the entire building.

TOM: Let’s go back to that whistling sound you mentioned before. I have had houses in the past where that’s how we knew the system was on, because you could hear that whistling everywhere.

TOM: Is that really a workmanship issue in terms of how those were put together?

RICHARD: Well, a properly sized and installed ducted system should be gentle; you shouldn’t hear it. It should be – it should come in with a low, sort of in-rush and just sort of put the right temperature up. And that’s not the case all the time. Oftentimes, we see ducts that are undersized, we see register grilles that are closed down and so they’re going to whistle against the register grille.

We also see so few systems in hot air zoned. And zoning is a very viable way that you can – people think of zoning all the time with hot-water heating systems but a lot of contractors stay away from zoning, because they’re afraid that they can’t get it right and stuff like that. But it’s a very viable way to put comfort in the right places. It’s not going to fix the noise issue but we can do better as far as putting the heating where it belongs.

LESLIE: Now, when it comes to the oil-canning sound that you had mentioned, generally this is caused by longer runs of exposed duct that just don’t have any rigidity to them?

RICHARD: Yeah. That’s the prime culprit, Leslie. If you’ve got a nice, long, straight duct system, that metal will sort of fall down. Gravity wants to pull the top part of it down and now you push air in it, it wants to pop back out and fill up like a balloon.

But there are ways to get around it. If the duct’s available to be worked on, you can add metal strips to the outside of it to add a little bit of a structure, like adding a 2×4 across a wall, kind of …

LESLIE: Right. Just to sort of brace it.

RICHARD: Absolutely. Just like – to sort of hold it a little bit. People have used strapping or plywood or different things. I’d prefer to use metal on a system, if I could.

RICHARD: And just to give it a little bit of rigidity.

And then you can also insulate that. Sometimes you can put a beautiful wrap of insulation all the way around it and that additional wrap – sort of wrapping it like a nice, toasty sweater – can also hold that oil-canning to a minimum.

TOM: Now, other noises we hear, sometimes you get sort of a vibration noise out of the blower.

TOM: Is that because it gets out of balance somehow?

RICHARD: It can, yeah. A blower motor is a motor that has bearings in it and it has a little pulley that can often drive the fan motor. And if that gets out of whack a little bit, it’s just like any fan or motor that’s just not quite in tune. And so you have to change either the fan blade or the motor itself and you’ll get quiet again.

LESLIE: And if you get a whooshing sound, that’s a really bad sign, huh?

RICHARD: Well, we’re whooshing that you didn’t but – sorry.

You’re going to get some whoosh. With most of these systems, there’s an in-rush fan. You’re trying to fill this plenum. The plenum is the big duct in all the ductwork. And so when it first comes on, it’ll be a whooo (ph) – and so you can’t escape that too much, unless you go to – but I will tell you nowadays, the modern furnace is, aside from being really efficient, many of them have variable-speed blower motors. And they have ECM, they call – Electronically Commutated Motors.

TOM: So much quieter.

RICHARD: Oh, they come in gently and they just sort of gently start to fill the duct and you really don’t notice as much as the old ones. The old ones were one speed: on, hot and then shut off and do it again. And so, the modern ones are much better.

TOM: Now, finally, one more type of whoosh sound that I’ve seen in the field is when you get a dirty burner, right? And the gas tends to build up and then you get sort of the little afterburn.

RICHARD: Little afterburn. If you have anything that sounds like a little secondary burn on a gas appliance, do not hesitate. Call a professional to come in; get that thing cleaned.

RICHARD: That is a safety condition that shouldn’t be left. You want that to ignite perfectly every time it comes on. And it’s even more graphic with propane. Propane is a gas which is heavier than air. And so what can happen is if it doesn’t completely burn, that propane can fall to the floor and you could have a little dangerous condition there, so …

TOM: Yeah, that’s a really important point, because I think that folks don’t recognize that these fuels – like any other type of fossil fuel, like your car – you would never imagine to never have to tune up your car.

TOM: Yet people go way too long without tuning up their gas furnaces or oil furnaces and so on.

TOM: Any fossil fuel needs to be cleaned so that it burns cleanly and efficiently.

TOM: So maintenance really is important with these systems.

RICHARD: Yeah. You go to the doctor once in a while, you get your car checked once in a while. You should really think about getting it serviced, I think, annually. But to the point about noise, if you hear a funky noise you haven’t heard before, call somebody right away. You want to get that thing serviced and you want to be safe.

TOM: Absolutely. Richard Trethewey, the plumbing and heating expert on TV’s This Old House, thanks so much for stopping by The Money Pit.