You are here: Home / How to Elevate a House above Flood Level

LESLIE: Well, if you live in the part of the Northeast where Hurricane Sandy hit, you know we’ve given a whole, new meaning to the term “raising the roof,” as hundreds of homeowners rebuild their storm-ravaged homes at higher elevations. 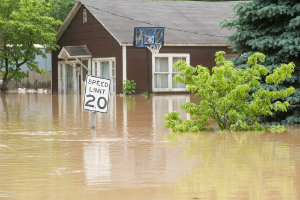 TOM: Some are choosing this to be safer in case of another devastating storm and some are being forced to raise their homes as new maps drawn by the Federal Emergency Management Agency outline new flood zones. This Old House host Kevin O’Connor got to see different ways a home can be raised and joins us now with some insight.

TOM: It’s kind of a peculiar sight when you first see these highly perched houses. But it’s becoming more common along the Jersey Shore as homeowners decide that they don’t ever want to worry about the rising tide again.

KEVIN: Well, I mean there’s really one way to combat against the rising tide and that’s to go up.

KEVIN: You just – you can’t stop the water from rising when it’s coming. And everyone down in New Jersey learned that thanks to Sandy. Not that we didn’t know it but it certainly made the point very clear to lots of people.

LESLIE: Well, we didn’t think it was ever going to happen to us, you know?

KEVIN: You never do. It’s correct.

KEVIN: And it was a doozy. It’s something that was – I think it was an anomaly but it doesn’t matter; the waters rose. A lot of people were devastated. A lot of houses were damaged by that and so, one of the best solutions is to actually raise the house.

TOM: Now, if you’re going to raise the house, you’ve got options. There is more than one way to accomplish this. What are those options and how do you make sense of what’s the best way to go for your particular situation?

KEVIN: Well, there’s several of them. The simplest and I would say the most common and least expensive is using pressure-treated pine pilings. So, southern yellow pine pilings. Basically telephone poles.

We’ve seen these before. And what’s great about these is they’re cost-effective. You actually drive them, sort of vibrate them into the ground with a portion of them sticking above grade that you can then build your house on. They could be 30 feet long and so they give you a good footing to put that house on, hopefully put your house above the water but also allows the water to flow underneath the house.

KEVIN: It’s the most conventional way and as I say, it’s one of the least expensive ways. What’s critical, though, is that because they’re 30-foot-long pilings, that you have room to work.

KEVIN: So it kind of assumes that there’s no house on that – in the way, right.

KEVIN: That’s not the case for a lot of folks whose houses are still there and need to go up and you can’t get the house out of the way. In those situations, you’ve got to figure out – “OK. Well, how do I get the house up?” And in many cases, you’re talking about up 4 feet, maybe 9 feet. You still might have to go down 30 feet.

KEVIN: And in fact, we did in New Jersey. We had to actually get under houses, go down through – how do you do that? Well, one of them is a pretty cool technology. It’s actually an old technology. It’s called the “screw-down, helical pile.” I think it was invented by the British for lighthouse construction but it works very much the same way that a driller would work.

They will drill a length into the ground – say 9 or 10 feet – and then when that bottoms out, they will add another length to it and continue to drill down, adding lengths as you go.

LESLIE: Are they connecting as they go down?

KEVIN: They are connecting as they go down. And so we actually – underneath the house, that gives you the ability to take a 9-foot length that you can stand upright underneath the raised house, drill it down into the ground, add the next one and keep going until you go as far as you have to go.

TOM: And then how do you go up from there? How do you actually raise the house? Are you adding sections to it? Are you turning them all at once? How does that work?

KEVIN: Well, in those cases, we actually raise the house first.

KEVIN: We jack the house up. We’d use a traditional steel-I-beam-and-cribbing system and jack it up with pumps.

KEVIN: And then you set it in place with temporary cribbing. That gave you room to work of about 9 feet or so. Then you drill down, screw these piles in. Once they’re all in and there’s a last segment sticking above grade, you can set the house back down on it.

KEVIN: And you’ve got a really firm connection to the ground but also the ability for the water to flow underneath.

TOM: And as you said, unlike the pressure-treated pine pilings, this can be done under the house without any need for all that heavy equipment to get on top of it and drive pilings.

KEVIN: Exactly. And it’s a technology used a lot in commercial construction. And sometimes, they use it even when there’s no building in place. But for residential construction, it’s a good alternative.

It is pricey. Of the options that we saw, it was the most expensive option that was out there.

LESLIE: Yeah. But part of that has to be just maintaining the structure of the home as you’re jacking it up so that you can work under it, so that nothing is askew by even a tiny bit that would cause any sort of racking or damage to the structure, true?

And there’s a main system. Think of it as sort of a manifold with lots of lines coming out of it. It’s intelligent enough that as it pushes the house up, it’s equally distributing the pressure to each one of those jacks. Because as you point out, the house isn’t symmetrical, the weight isn’t evenly distributed. These guys were able to lift these houses without cracking the plaster.

KEVIN: It really is.

LESLIE: Do you keep the furniture inside? Just a question.

KEVIN: I joke, because they could do it without cracking the plaster but they did actually punch holes in the side of the house so they could get these steel I-beams through, so …

TOM: He has to kind of thread them through. I think that’s called “needle-beaming.”

KEVIN: It shows you how sophisticated the technology is and how well-developed the house-jacking industry is.

TOM: So we talked about pressure-treated pilings – the pine pilings. We talked about helical pilings. There’s also something called “concrete piers.” How do they differ from the first two options?

KEVIN: Well, we used those, as well. And the easiest way to think about these is it’s a pier but it’s constructed piece by piece. In this case, we used concrete block.

So, again, we had a house that was already raised but we only had about 9 feet or so of elevation to work underneath it. We poured traditional footings out of poured concrete, reinforced in a frame. And then we actually started building, with concrete block, a pier from that footing up to the bottom of the house. So good, strong structure.

In this case, we were able to do it because that particular house was in what they called an A-zone, which basically means they weren’t expecting wave action. They weren’t expecting movement of water that could imperil that block construction. So a helical, screw-down pile wasn’t necessary. This was a good alternative. They were able to save some money, get the structural support that they were – that was necessary for the house and then lower it back down onto those piers.

So that’s three different ways that we did it. And I think they encompass a good choice for homeowners out there who have to raise a house.

LESLIE: Now, if you’re raising this house so that the water can pass through underneath it, in theory, can you use that space? Does it become your parking spot? Do you store things? Do you just leave it empty?

KEVIN: You can use it but you can’t use it as living space. And so, as you point out, yes, you can use it for storage, you can use it for a garage. But you cannot put the basement family room down there. You do not want to have living space down there. The assumption is it will take water, it will get damaged. And so you don’t want to finish it off; you just want to have it for storage or cars. Again, you would think that you can get those things out of there or you could replace those if they end up getting flooded.

TOM: So if you own a beautiful seaside home and your extended family wants to visit for the summer, that’s where you make them stay.

TOM: Kevin O’Connor, the host of TV’s This Old House, thanks so much for stopping by The Money Pit.

Black Out Survival Tips, Should You Go Solar?, How to Organize Your Home and Create Clutter Free Landing Zones and more

Outdoor Living Areas: Keeping Warm in Autumn. What is a Power Inverter?, The Best This Old House Renovations and More