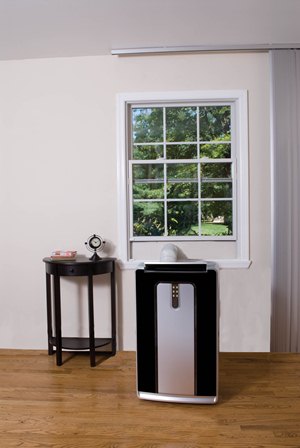 Here to tell us more is Tom Kelly, the Vice President and General Manager of the Haier Air Conditioning group. So tell us about portable air conditioning. I don’t think a lot of folks are familiar with how these units work, because we’re just so accustomed to having central or room units.

TOM KELLY: Yeah. Portable is an emerging category in the room air conditioner space, and it’s really become quite prevalent in the last several years. Most people, as you said, you know, think of a central A/C system or a unit that they’re going to put in a window, a typical boxy metal cased unit. And in those cases where you do have windows that, like you said, are odd-shaped, or maybe they open from left to right rather than up and down, a portable air conditioner is really a good solution for these kind of strange-shaped windows or in a place where you only have occasional need to cool that space. [0:01:18]

KRAEUTLER: Now, Tom, your portable units are sold under the Commercial Cool brand. You’ve got a new one out called the CPN12XH9; gosh, it just rolls off your tongue, doesn’t it? Tell us about that particular unit.

KELLY: That unit is a 12,000 BTU, so it’s going to cool a relatively good-sized space, and that actually has a heat pump built into it. So on top of the air conditioning mode that most people would be familiar with, you can also use it as a heat pump, as a heater in cooler weather. And it also has a dehumidifier function built into it so if you wanted to use it, say, in a basement, you could use it as a dehumidifier along as an air conditioner, and then in those cooler months as a heater. And if you want to just kind of blow the air around in that space you can run it as a fan as well. [0:02:08]

KRAEUTLER: Now, how does this work? I mean obviously there is a reason that we have window air conditioners, because we want to take the air from the outside, run it through the compressor and the coil, and then below cooler air inside. Is there venting that has to be installed with a portable unit?

KELLY: You know, that is one of the misconceptions about portable air conditioners. They do have to be vented to the outside, because you’re going to take the heat that’s in that space and you’re going to run it through the unit just as you described. But we need to put that heat somewhere; you can’t just make it magically disappear.

So all the portables have an exhaust hose and a window kit that adapts into that exhaust hose.

And what you’re going to do is basically use some of the air that you’ve got in the room to cool the space that you’re in. And then another part of that air is also going to be blown through the unit and it’s going to cool off the internal components on the air conditioner and then blow it out that exhaust vent and out to the outside. [0:03:07]

KRAEUTLER: Now, what about the humidity that we’re collecting as we take air from warm to cool? We’re going to release a lot of moisture inside that air in a central system that runs to a collection point and is pumped outside or runs through a gravity feed outside. In a window unit, it may very well trickle back outside or be dispersed into the fan blade. Is that kind of what happens with a portable unit?

KELLY: Yeah. We use a slightly different technology. We actually have a small turbine fan inside the unit that actually picks the water up out of the sump of the unit, and then it’s going to spray that water onto the condensing coil, which is the hot coil inside the unit. That water is then going to evaporate. And then as we’re blowing that heat that we’ve taken out of the room out of that exhaust hose, it’s also going to take that evaporated moisture and blow it out the window as well.

KRAEUTLER: Now, do we have the ability to program when the unit may come on or off? We want to set it to, say, you know, beyond when we come home from work, or run a bit at night and then go off while we’re asleep? [0:04:06]

KELLY: Yeah, we have a timer on all these models, and specifically on the 12 heat/cool that we’re specifically talking about. And that unit can be programmed to either shut off anywhere between one and twenty-four hours, or to turn off anywhere between one and twenty-four hours. So if, as you’ve described, we want to turn the unit on maybe two hours before we get home from work and have a nice, cool bedroom waiting for us when we get home, you can do that.

KRAEUTLER: All right, final question: What’s the retail price for a product like this?

KELLY: The approximate retail price, what we’d expect to see, is probably 499.

KRAEUTLER: All right, well, it makes sense. If you need it, you need it. It seems like it’s kind of a niche product; that if you really want to have cooling in an area that doesn’t lend itself to a window unit, or certainly not to central, that this is definitely the way to go. Tom Kelly, Vice President and General Manager for the air conditioning group, thanks so much for stopping by the Money Pit.

KRAEUTLER: And if you’d like more information, you can visit their web site, which is Haieramerica.com, that’s spelled H-A-I-E-R, America, dotcom. [0:05:24]