LESLIE: Well, when I was a kid, I was the snow thrower. But these days, shoveling snow is a chore that I’d rather avoid. My allowance doesn’t get any kind of boost for doing that job. 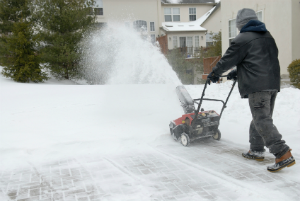 TOM: Well, I sympathize with you because my snow-shoveling staff is dwindling because my kids are away at college. So I guess both of us could use a machine that can tackle the job quickly and without a ton of effort. But with so many mechanical snow-removal machines on the market, how do you begin to choose? To help us, we welcome Roger Cook, the landscaping contractor for This Old House.

ROGER: Thank you. First of all, have you tried to hire a kid nowadays to shovel it?

LESLIE: You can’t find them.

ROGER: No. And they’re pricy.

ROGER: Oh, man. I remember I got paid in candy bars one time.

TOM: Remember that? So…

LESLIE: I think I might still do it for candy but I’m just saying.

TOM: So, first, tell me what’s the difference between a snow thrower and a snow blower?

ROGER: Basically, it’s stages. A snow thrower is a single-stage machine that has a blade that’s turning very quickly that scoops the snow and throws it out the front of the machine.

ROGER: A snow blower is a two-stage machine where a blade turns slowly and feeds the snow into an impeller, which is moving very quickly, which sends the snow out of the machine.

TOM: OK. So I guess a snow blower is good for heavier snowfalls.

TOM: Because you’re taking that snow and I guess probably more hard-packed snow and icy snow and grinding it up, essentially.

ROGER: Right. So that it’s being brought into the machine, grinded up and then pushed out very fast.

TOM: Now, there’s a third version of this called a “three-stage snow blower.”

TOM: That’s sort of like both on steroids or what?

ROGER: Pretty much. If you have a double-wide driveway with a big snowplow mound at the end of it, this three-stage machine will throw it and they say up to 50 feet, so make sure you’re careful of the neighbors.

LESLIE: OK. Is there one that’s better for a different type of surface or perhaps an amount of area, depth of snow?

ROGER: There is. Think about – we start from the least amount of snow up to the most.

ROGER: A snow thrower, the single-stage one, is good for maybe 8 to 10 inches of snow at the most, because the opening on those machines is not very big. And if snow gets higher than that, you can’t get the machine through. And it’s not great on heavy, wet snow and it’s not great on the end-of-the-driveway snowbank, that’s for sure.

LESLIE: Ugh. Those snow trucks that come in and – after you’ve done a beautiful job shoveling – fill it back in for you.

ROGER: They know just when you’re done and they come and …

ROGER: Right. But that’s where the two-stage one – the snow blower – comes into place. That actually feeds the auger with that heavy, wet snow and then throws it out. So it can chew up and eat much more denser, higher or even snowplow-packed snow.

LESLIE: But will that work on a low quantity of snow, as well, or do you have to have a combination of the two?

ROGER: It will. It’ll do a good job. But usually, when you have the least amount of snow, you want that thrower because it’s really quick and easy. The thing with the snow thrower is if you have a gravel driveway, it’ll dig down in and you’ll be sending stone everywhere and cleaning it up all spring long, so …

TOM: Now, besides the snow thrower and the two-stage machine – the snow blower – there’s also a three-stage snow blower. You’ve got to have a pretty serious storm for that.

ROGER: Yeah. You must live in Buffalo.

ROGER: And it’s just a big machine. I mean this thing is made to clean a double-wide driveway with a big plow blowup in the end and they say it’ll throw snow 50 feet. So, be careful with your neighbor’s house.

TOM: Be careful what you ask for, right?

TOM: Exactly. So I guess the question is: how do you choose between the options? It’s really down to the amount of snow you need to clear?

ROGER: Yes, it is. Just knowing what you’re going to have to do. We don’t want to be undersized but we don’t want to pay extra money and be oversized either. So let’s start with – we talked about the snow thrower. That’s good, maybe – like I said, 8 or 10 inches of white snow it’ll go through. But once it gets beyond that – and again, there’s going to be times where it’ll fit perfectly for the amount of snow you have but Mother Nature doesn’t always give you the same amount of snow and the same density.

LESLIE: No, she does not.

ROGER: So it’s better to oversize a little bit than it is to undersize.

LESLIE: Do you find that the way it’s fueled sort of impacts the power or the aggressiveness of the snow blower/thrower?

ROGER: They’re both gas-powered, for the most part. There are some electrical ones out there. For the most part, they’re gas-powered and the size of the gas engine – the snow thrower has a very small engine. The two-stage snow blower has a much bigger engine on.

LESLIE: Will you find electric options in both?

ROGER: Yeah. For the snow, you plug it in and you just go out on your deck and it takes care of 4 to 6 inches of snow like that.

ROGER: It’s amazing. But once it gets over that, you’re lifting it up and then it gets really heavy and you can’t do anything with it. The same thing – again, even an electric snow blower will work fine in a small amount of snow.

LESLIE: So, Roger, if you want this snow blower or thrower to work when you really need it, what kind of maintenance do we have to do to keep it running?

ROGER: Well, you want to do the maintenance in the fall before the snow comes, not being out there during a snowstorm trying to get everything going again.

ROGER: Make sure you have a new spark plug or at least a clean spark plug in it. But the most important thing is the fuel. I like to bake and make up a batch of fuel, right before winter, that has stabilizer in it so that fuel will stay good all winter long. The worst thing you can do is put aged gas that’s not treated in the machine, because it won’t start.

LESLIE: Mm-hmm. And how long will the fuel last with stabilizer?

ROGER: Three to six months, depending on what you use.

ROGER: And then one other key thing to remember is that in the two-stage models – they have shear pins in the blades. So they turn and if they hit something, it’ll break the shear pin. So always have a few of those extra hanging around.

TOM: Let’s talk about safety. That’s going to be very, very important when you’re using a snow blower and probably a snow thrower, as well. But you’re got very powerful blades that are spinning with those machines.

ROGER: I still can’t believe every year how many people are injured by sticking their hands inside a snow thrower or a blower.

LESLIE: Oh, this blade is stuck. Let me free it with my hands.

ROGER: Yeah. Not a good idea. Never ever put your hand inside of the machine. All of the machines nowadays come with a small plastic shovel. Or you can take a piece of wood or something. If it does get clogged, shut it off, go in there with a tool or the wooden stick, get that loosened material, get it out and then start it up and make sure it’s cleared again. Do not ever put your hand inside a machine.

TOM: Good advice. Roger Cook from TV’s This Old House with tips on how to pick the perfect snow blower or thrower for your house.

ROGER: Hey, have a lot of fun in the snow. I’m going to Florida.