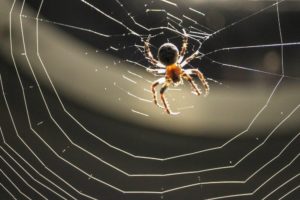 Are you one of the millions of Americans who find spiders frightening? Or the equally large group who find them intriginging? Or both! Either way, it’s a common belief that spiders enter our homes and other structures in the fall and take up residence to survive the harsh winter conditions. However, bad news for arachnophobes: pest control experts have found that spiders don’t flock to your home in the autumn, but rather they’ve been living with you year-round. As spring emerges, these unseen houseguest house spiders are starting to prepare for the summer season by laying eggs and making your home – their home!

While a few spiders on your property can actually be a good thing — they eat annoying pests like mosquitoes, flies, and ants — female spiders can lay as many as a couple hundred to a thousand eggs, which is a few hundred too many for most homeowners.

We’ve put together this guide of the seven most common house spiders to help homeowners identify what kind of arachnid they’re dealing with and whether they should be worried if they find these crawling creatures on their property.

The American house spider resides in the same family as the black widow spider; however, this species rarely injects its venom, and the venom is not lethal to humans. Victims will probably experience nothing more than an itchy bump at the site of the bite.

Don’t let the movies fool you; this species does not attack people and would prefer to run away from any kind of conflict. The American house spider is even known to “play dead” when threatened.

Contrary to the rumors, the long-bodied cellar spider is not the most deadly spider in the world. They are venomous, but the effect their venom has on humans is little to none. There are no reported cases of people being hospitalized due to a bite from this spider.

As if just seeing a spider is bad enough, the jumping spider may live in your house and has the added ability to leap into thin air and land on you! There is no need to panic if bitten by a jumping spider. While these tiny arachnids are venomous, their venom isn’t harmful to people — fortunately, they can’t deliver a dose large enough to be harmful.

Fortunately, the wolf spider’s venom is not particularly harmful to humans and symptoms usually include redness and swelling.

Wolf spiders are typically active at night but have been known to hunt for food during the day. They usually only enter a house in search of food and end up staying, taking up residence in a wall crack or under the furniture.

Although for many years it was believed that hobo spiders were aggressive, that is actually not entirely true. Hobo spiders are no more aggressive than any other species but the idea may have stemmed from the fact that female hobo spiders are particularly protective of their egg sac. If the female believes her egg sac is threatened or in danger, she may bite.

It should be noted that according to the Centers for Disease Control and Prevention, a hobo spider’s venom is not toxic to humans; irritation and a small red bump are common symptoms of a hobo spider bite.

Brown Recluse (aka the Fiddle Spider or Violin Spider)

Brown Recluse Spiders are an insect to be respected. While not aggressive in nature and prefer to run away, these brown recluse spiders tend to bite when they feel threatened or cornered.

If necrosis does occur, the area around the bite will begin to turn purple and a bulls-eye lesion will form. It may take several weeks for the area to heal fully and can leave a pit of scar tissue.

Children and the elderly are more susceptible to the venom, and it is recommended that they see a doctor right away. A healthy adult should be able to treat the bite at home and recover. However, if the bite does not get better after a few days, consult with your doctor.

Generally, black widows are not an aggressive spider; they tend to keep to themselves and only bite when disturbed. While a bite from a male black widow isn’t anything to be worried about, a bite from a female could result in less than favorable conditions and a possible hospital trip.

Spider bite victims have said the bite feels like a pinprick and within a few minutes, nausea, severe pain in the abdomen and back, and muscle aches are exhibited.

Luckily, most black widow bites are not fatal and victims can receive black widow antivenom to help minimize the symptoms.

How to Prevent Spiders in Your House

Spider infestations are often a result of an underlying pest problem — most spiders do not seek out people’s home but are simply looking for their next meal. A home with an ant, termite, or even mosquito problem makes for an excellent food source.

While having the occasional spider in the house can be a good thing. Most people don’t want to share their bedroom with a wolf spider. Fortunately, there are several ways homeowners can help reduce the number of spiders in their home.

The majority of spiders on this list are shy and solitary creatures, so it’s likely they have found a low-traffic area of your house to hide out. A basement or attic is prime real-estate for an arachnid. Using a broom or duster, look for webs and knock them down. You may need to do this every few weeks. Eventually, the spider should get the hint that they are not welcome and will relocate somewhere else. If needed, do a sweep of the entire house and knock down any webs you find.

A messy home is a haven for all kinds of pests. Leaving plates of uneaten food on the counter, rotten food in the garbage, and crumbs left on the floor is going to invite flies, cockroaches, ants, and even rodents into your home — a buffet for spiders. To keep spiders out of your home, you’ll need to cut off their food supply. It’s important for homeowners to keep their home as decluttered and sanitary as possible. If there are no pests in the house, the spider will have to go elsewhere for his meals.

Spiders love to hide out in the underbrush and anything that resembles it will attract them. Stagnant piles of leaves, compost, and lawn shavings near the home are extremely inviting to a spider and bring them that much closer to entering your home. Simply move the piles away from the house and the spiders should follow.

When to Contact a Pest Professional to Remove Spiders

If you notice a significant increase in spider activity around your home, its best to call a pest professional who can inspect your property and identify what might be contributing to your infestation, talk with neighbors and see which company they recommend or read customer reviews to find a reliable, affordable, and trustworthy pest control company.

How to Get Rid of Brown Recluse Spiders

How to Clean Grill and Store for the Season, Get Rid of Spiders, Think Outside the Box Kitchen Design and more

Five Smart Outdoor Summer Projects, How to Extend Your Swimming Pool Season, Advice on Preparing for Severe Weather and more.