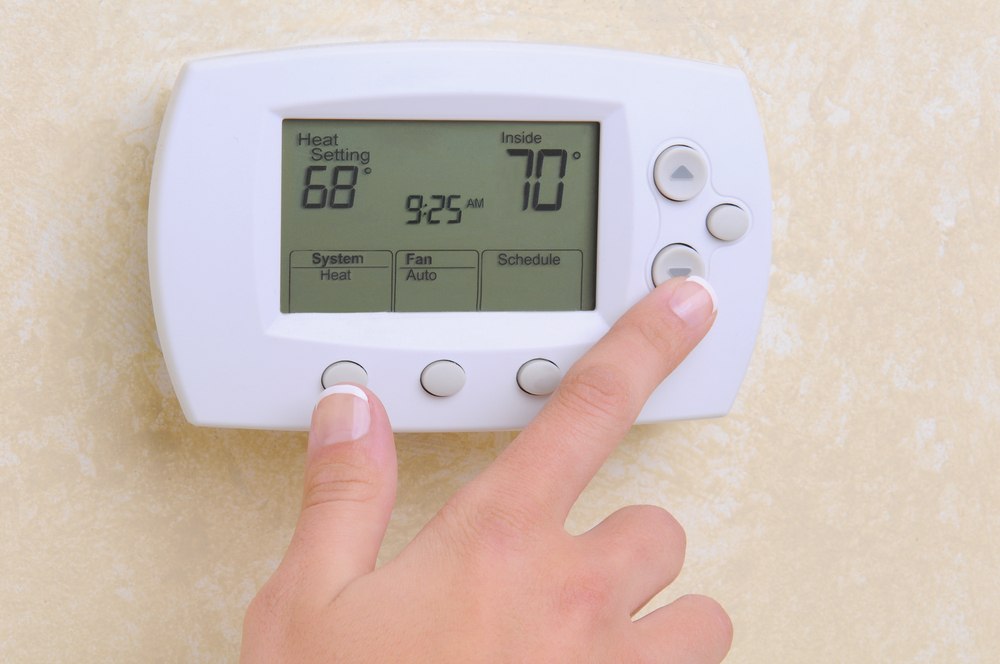 Save Money with a Programmable Thermostat

Save Money with a Programmable Thermostat

LESLIE: Well, heating and cooling your home accounts for a third of your annual energy expenses. And a simple way to cut costs is by installing and using a programmable thermostat.

TOM: Here to tell us more about it and why it has such a great payback is This Old House host, Kevin O’Connor.

KEVIN: Great to be here, guys. Thank you for having me.

TOM: Our pleasure. Now, exactly how much can that programmable thermostat save you?

KEVIN: Well, I think if you use it properly and you’ve got an older, non-programmable model in the house, the difference can be almost 10 percent of your heating and cooling bill, which is pretty dramatic for such a simple, little item.

TOM: That’s a lot. Now, you said use it properly. Let’s talk about that, because we’ve all got a lot of crazy schedules these days. When do you turn the heat up and when do you turn it down?

So, obviously, we use these thermostats to condition the house to the level we want when we want it. And because it gives you that flexibility to program it, to use the timer, you’re going to be much more inclined to adjust your energy use accordingly.

LESLIE: And we’re not saying, you know, just have it come on right when you’re walking in the door. It makes sense to have that heating or cooling sort of happen an hour, two hours, whatever it might be, before you come back into the property, correct?

KEVIN: Well, we’re heating and cooling our houses so that they’re comfortable, right? So there’s nothing wrong with using energy. It’s the wasting of the energy that we don’t want. So sure. If you know you’re coming back at 6:00 and you want to come back to a warm house, well then that’s your decision. Turn the thing on at 5:00. But turn it on at 5:00 as opposed to leaving it on at 7:00 a.m. That’s where you’re going to save energy and save a couple bucks.

TOM: And that’s gotten a lot easier, because these thermostats are getting so much smarter these days. They could even know when holidays happen, so you could program it to come up an hour before you wake up in the morning and then go down when you leave to work and even know that this particular Thursday is a holiday and so we should leave it at a different temperature all day long.

KEVIN: They’re getting smarter, they’re getting easier to use and remarkably, you can actually now control these things remotely. Some of them tie right into the internet and you could be away on vacation and want to come back to a house that’s air-conditioned and you have no idea what time you’re going to get back and how long it takes to pack up the kids. You can go onto the internet and turn that thing on so your house is comfortable when you get there.

TOM: Imagine you’re within the last hour of home and you whip out your iPhone and you turn up the heat.

KEVIN: Yeah. Or when you’re at work, you turn it down on your spouse. Oh, no, I didn’t say that.

LESLIE: No, wait. We’re talking about adjusting the temperature – hot, cold, whatever it might be – season-wise. What is the temperature differential that we should really focus on, to maximize our energy savings? Are we talking 15 degrees or 4? What is it?

KEVIN: Well, I’m not sure if there is actually a magic number. I certainly don’t know what the magic number is, because there’s something subjective here. But I will tell you that there are some diminishing returns. If you enjoy it to be 72 degrees when you’re in the house and you’re going to be gone for 8 hours, it is not a good practice to turn it all the way down to 38 degrees between the hours of 8:00 a.m. and 3:00 p.m. Because at some point, your mechanical equipment has to work so much harder to recharge the house.

LESLIE: Now, when it comes to actually installing your programmable thermostat, is there a location in the house that’s better than others?

KEVIN: Oh, absolutely. I mean think about it. It’s basically a thermometer that is measuring the temperature of the air and then it’s telling the air conditioning or the heating system to come on or come off. So, you don’t want to stick it on an outside wall; that’s going to be the hot wall in the summer or the cold wall in the winter. You probably want to think about putting it on an interior wall, in a wall that is sort of central to the space; the space that you’re actually going to be occupying, that you want to come up to a certain temperature.

And also, if you’ve got a hot-air system, don’t put it next to one of the registers where it’s blowing hot air or cold air conditioning right onto the thermostat or right next to a radiator, because that’s going to trick the thermostat into thinking that it is colder or hotter than it actually is.

TOM: And whatever you do, don’t put it opposite the fireplace. That could be a big mistake when that heat comes on. Your thermostat is going to think that it’s very, very warm in the house when that just isn’t the case.

KEVIN: Not a good idea.

TOM: Great advice and an easy way to save your energy dollars. Kevin O’Connor, host of TV’s This Old House, thanks so much for stopping by The Money Pit.

KEVIN: Thanks for having me, guys.

TOM: For more tips, including a video of how to install a programmable thermostat, visit ThisOldHouse.com.