TOM KRAEUTLER: Hey, it’s Tom Kraeutler, and welcome to this edition of the Top Products Podcast. You know, the threat of the West Nile virus, which is brought on by the bite of a mosquito, has reached near epidemic proportions. At this point, 38 states have discovered the virus in humans, and actually it’s been found in I think 43 states, or 47 states overall when you count the occurrences in birds or mosquitos, and so it’s really become a very major problem. 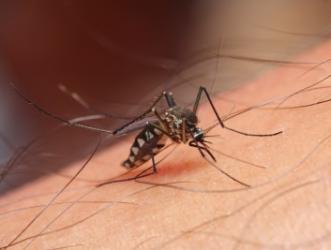 So the question is, how do you protect yourself and your family? The answer is that it all starts at home, and here to talk to us about how to do just that is Greg Baumann. Greg is the Vice President of Training and Technical Services for Rollins. And Rollins is the parent company for big pest control brands like Orkin, Western, and many others. He’s been on the show many times in the past; we always welcome his advice. Welcome, Greg.

TOM KRAEUTLER: So Greg, West Nile is really in the news these days. The CDC continues to report more and more cases. There are people dying all over the country. We’ve been talking to you, and I, about mosquito prevention for many years. It’s always been more of an annoyance up until recently and now it’s a real serious health threat. So where do we start at home? Let’s begin by talking about the things that work, the things that people can do themselves that really will have an impact on mosquito populations in and around their backyard.

GREG BAUMANN: Well, I think probably the most important thing is to keep it in perspective, stay calm. Mosquito-borne diseases are an issue, but just because you see a mosquito does not mean that you’re going to get West Nile virus. So the important thing is take it seriously, but don’t panic.

And, you know, some people ask “What is West Nile virus? Where did it come from?” It actually came from probably Uganda, and at the very headwaters of the Nile River, and that’s why it’s called the West Nile virus. It was imported into the United States about, oh, 15 years ago, somewhere in there.

And anytime you have mosquitos near your house, it’s really, really smart to eliminate standing water. Now, most people will say, “Okay, I’m going to get rid of the kiddie pool; that solves that problem. I’m going to empty the birdbath or change the water every couple days; that’s going to solve that problem.” But people sometimes don’t think about kids’ toys that will collect water. They don’t think about that little culvert out back that would collect water. [0:02:29]

TOM KRAEUTLER: You know what else they don’t think about?

GREG BAUMANN: And that’s exactly right. You know, even if the downspout is not clogged and, you know, it’s not overflowing, you still could have standing water, because, Tom, you’ve seen many times where those gutters are sloped the wrong way and there’s standing water in there.

TOM KRAEUTLER: Oh, yeah. They get dirty, people don’t clean them frequently enough, and you have a pool upon pool surrounding your house. Just keeping your gutters clean will stop the mosquitos from breeding in there. I’ve been up in gutters that have been clogged and actually seen the mosquitos breeding in the water. [0:03:00]

GREG BAUMANN: You’ve also seen them in crawl spaces, too. You say, “How did they get in crawl spaces?” Well, they don’t need very big openings to get into those safe areas. I’m going to tell you a personal story. I set up rain barrels once, and I was so proud. We had a thunderstorm and the rain barrel filled up, and I thought “I’m going to go out the next day and see how much water I have.” I was shocked how much water came off the roof, but I already had mosquito eggs floating in there.

TOM KRAEUTLER: Yeah, and that’s a good point, because it doesn’t take very long for mosquitos to find it. And the breeding time of mosquitos is – I think it’s about seven days, isn’t it?

GREG BAUMANN: Yeah, yeah. It’s just a few days. They lay the eggs, the little wigglers will be inside the water, and that’s why those rain barrels typically will have screens on them, so mosquitos can’t get down into the water to lay the eggs. But this was such a great rain that it overflowed. So it doesn’t take long at all, and of course, you know, with all those eggs and all those wigglers, they become adult mosquitos.

And also remember this: You know, it’s the female that feeds. They need to feed on blood to lay their eggs. And the mosquitos that transmit West Nile virus are typically ones that feed on birds; that mosquitos hang at the tops of trees, but they will come down near humans, and that’s why birds are involved in this, and then they can spread the disease from birds to humans. [0:04:11]

TOM KRAEUTLER: We’re talking to Greg Baumann; he’s the Vice President of Training and Technical Services for Rollins, the parent company for Orkin, Western, and many more. So Greg, what we’ve learned is the things that we can do on our own house really comes down to eliminate the standing water in terms of not creating the breeding areas; both the obvious places, like the ponding water, but also the less obvious, like clogged gutters, birdbaths, and things of that nature.

Now, on top of that, what can we do to protect ourselves with sprays? Let’s talk about the bug sprays. Now, I know that DEET was invented by the Army way back when. They wanted to protect soldiers that were going to be fighting in the jungles. In my experience, nothing else works but DEET, but there are a lot of products out there. How do you decide which one is the best for you?

GREG BAUMANN: There are a lot of products out there, and there’s a huge market for mosquito repellents, and you never know whether they’re going to work. Truth is DEET is still the best that’s out there. It’s an EPA-registered product, which means that EPA has reviewed the health data and decided that it’s going to be an acceptable product for use out there, so use DEET. Follow the directions on the container though. It’s extremely important not to deviate from those directions because it will be most effective if you follow it exactly as the manufacturer suggests. [0:05:32]

TOM KRAEUTLER: Now, what about the other products that are out there like, let’s see, I think there’s Picaridin, if I’m saying that correctly. And there’s other types of oils; I think oil of lemon, eucalyptus I think is another product. Any advice on those? Have you had any experience with them?

GREG BAUMANN: So many of these products will work really, really well with a small population of mosquitos in a closed container. But at this point there really is no magic bullet to keep those mosquitos away from you. [0:06:16]

TOM KRAEUTLER: So DEET is definitely the way to go. Now, let’s talk about some things that are out there that really don’t work. People might be surprised to hear this, but bug zappers are not very effective, are they?

GREG BAUMANN: Yeah. Bug zappers aren’t really effective because they could draw in the mosquitos. And also the frequency of the light that’s supposed to bring in these insects might not be attractive to all types of mosquitos. It just really is not going to be effective to knock down large populations that might be all over your yard, for example.

TOM KRAEUTLER: Other things that people have heard are the sort of old wives’ tales; bats, for example. I understand that you would have to have an amazing number of bats in order to keep the mosquito population down.

GREG BAUMANN: Bats are such an important natural pest control device, but they’re just aren’t enough of them to control all of the mosquitos out there. And so many of the mosquitos come out when the bats are not out looking for food. [0:07:07]

TOM KRAEUTLER: Now, citronella is always thought of as being something that’s very effective against mosquitos, but the studies have shown that it’s not really much more effective than just burning a regular candle.

GREG BAUMANN: That’s exactly right. Citronella; I remember those candles when I was a kid. We’d sit outside and light the candles, and then we’d scratch the mosquitos away.

GREG BAUMANN: And again, it’s a very localized… If there’s a large population, because it is summer as an example, in a yard, just a couple candles will not keep the mosquitos away. There’s just not enough citronella going into the air.

TOM KRAEUTLER: We’re talking to Greg Baumann. He’s the Vice President of Training and Technical Services for Rollins Pest Control, the parent company behind Orkin, Western, and many other great pest control brands. So Greg, if we want to bring a pro in to help control the mosquito population around our house, what do you do when your pros go out in the field to try to reduce mosquito populations? [0:08:01]

GREG BAUMANN: Well, the pest control industry certainly can help. And when you have mosquitos near your house, or say near a patio, the professional will come out, take a look, figure out what kind of mosquito it is, and in fact confirm that it is, in fact, a mosquito problem. And then they typically will treat the vegetation around the house to try to knock down the populations, because mosquitos typically are going to be on the underside of the foliage or on the sides of the building. So they can do a treatment, and the material will break down in the sun; it will just knock down the populations to reduce the chances of mosquitos chasing you away from your picnic. No mosquito control work is going to totally eliminate mosquitos and keep them away.

TOM KRAEUTLER: Greg Baumann, the Vice President of Training and Technical Services for Rollins, the parent company behind Orkin, Western, and many other great pest control firms, thanks so much for being a part of the Money Pit’s Top Products Podcast. If you’d like more information on how to control the bugs around your home, take a look at the Orkin website at Orkin.com; it’s O-R-K-I-N dotcom; lots of great resources right there on that site.

Greg, thanks so much for stopping by the Money Pit.

How to Mosquito-Proof Your Yard