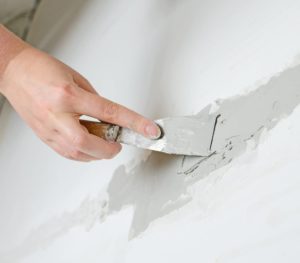 LESLIE: Alright. Now we’ve got Gary in Maryland with some wall cracks. Tell us what’s going on.

GARY: The cracks are along the one outside wall – or the one wall on the short side, on a 26-foot side. And they’re both on either side of the bathroom, which is between two bedrooms.

TOM: So what you’re describing is a pretty normal scenario. We typically get movement in walls of homes and where you have seams between walls and ceilings, one wall and another wall or above a window or above a door. That’s where the movement tends to evidence itself.

Now, the solution here is going to require that you redo the seam between the cracked areas. What you’ll do is you’ll pull off the old drywall tape, if it’s loose. If it’s not loose, you could probably leave it in place. But if it’s loose or if it’s wrinkled or anything like that, I would pull it out. And I would replace that with fiberglass drywall tape.

Fiberglass drywall tape kind of looks like a netting and it’s sticky, it’s easier to handle. And so you press it into the seam. And then once it’s pressed in place, then you’re going to add three layers of spackle on top of that, making each one as thin as possible. So you start with the first one, try to keep it pretty narrow and just cover the tape. And then the subsequent two, you go a little wider and a little wider and try to feather out the edges. And that actually will bridge that gap between the two surfaces and the crack will not form again.

If you try to spackle over a crack without doing that, it’s just going to show up. I mean you could spackle it and paint it but it’s going to come out every winter or every summer, depending on whether it’s swelling or shrinking that’s causing the crack. It’s going to pop open again.

GARY: Good. Thank you very much. Good show, too.

TOM: You’re welcome, Gary. Thanks so much for calling us at 888-MONEY-PIT.

How to Repair Drywall Dings and Dents | Video

Repairing Cracks in Walls and Ceilings

How to Fix Cracked Drywall

How to Patch Cracks in the Walls and Ceiling