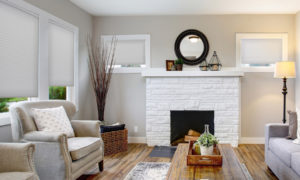 How to Repair a Leaking Chimney

How to Repair a Leaking Chimney

LESLIE: David in Arkansas, you’ve got The Money Pit. How can we help you today?

DAVID: I have a native stone-based fireplace, with a cinder-block core. And it’s, thankfully, on the outside of the house. However, the roof line continues so that it covers our carport. And if it rains, oh, substantially, after a bit it begins to get a little ripplage (ph) of water that drains on the outside of the stone, into the carport. So, it’s a bit puzzling. We use – we tried to reface the flashing, you know, with just black tar and that sort of thing. But still seems to leak a bit when there’s substantial rain.

TOM: So, I’m having trouble imagining the layout here but is this a situation where you have water from the roof that’s running down towards the chimney?

TOM: And does the chimney have a cricket? Do you know what a cricket is? It’s like sort of a peaked piece of flashing that diverts the water around it.

DAVID: It does have a flashing that runs around it. That’s correct.

TOM: OK. Well, a cricket is not just the flashing. A chimney cricket is like a modification of the roof plane, where it pitches upwards so that the water doesn’t actually strike the back of the chimney. It goes around the chimney.

DAVID: Oh, no, no. It’s a consistent roofline sloping downward.

TOM: So, one thing that you could do is you could put a piece of flashing on the roof to intercept the runoff from the roof that’s heading towards the chimney and sort of divert it around it. And that kind of sort of diverter move will reduce the volume of water that’s striking the chimney. And that can help minimize the problem.

Now, in terms of the flashing repair itself, you mentioned tar. It’s probably the worst thing you could put on a chimney and I know that folks do it all the time. But the right way to do it, if you have a flashing leak, is to replace the flashing. And flashing is always sold in two pieces. You have a base flashing that goes under the roof shingles and against the chimney. And you have a counterflashing that goes in the chimney mortar joints and then down on top of the base flashing. And it’s done that way so it can expand and contract with the movement, because the chimney’s going to move differently than the roof. The tar might give you a temporary seal but eventually, it’s just going to crack.

So I would recommend you install a diverter, try to move some of the water around the chimney. And if it continues, do a better job repairing the flashing in the chimney, because it shouldn’t happen.

DAVID: OK. Will do. I appreciate it so much. Enjoy your show.

How Can I Fix a Chimney Flue Leak?

Roof Repair or Replace? How to Know When it’s Time for Your Roof to Go!

Affordable Home Makeovers, Choosing the Right Generator Before the Next Power Outage, and How Renters Can Save on Heating Bills

Finding the Source of a Leak in a Chimney