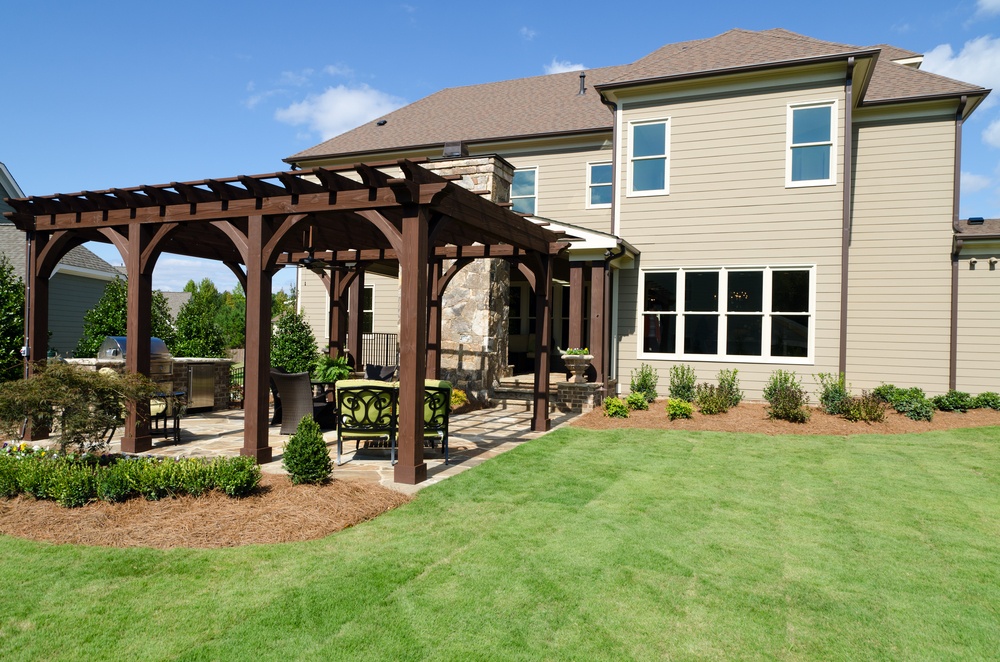 LESLIE: Naomi in Pennsylvania wants to drain yard of standing water. How can we help you today?

NAOMI: What I have is my backyard, over the past several years we’ve taken down a couple of major trees. They’ve died. And now, whenever it rains, pretty much I have standing water for a long period of time and it’s really nasty.

So, I’ve been looking online for ideas. I’ve gone to garden centers looking for plants to do well in standing water. And in the Northeast, we don’t have a long growing season, so a lot of the plants that I’m looking up don’t seem to be doing well.

So, other ideas my husband and I have kicked around are putting a floating deck, I see, that you can build out there?

TOM: I don’t think you have to become Tom Sawyer here, Naomi, OK, and build a raft to float down the river.

NAOMI: Well, my husband’s idea was to put stone all over.

TOM: How about this idea? How about if we drain yard of standing water? You like that idea?

NAOMI: Well, how do you go about doing that? We were not sure …

TOM: So, first of all, it sounds like the backyard is sloped in such a way that the water runs into it but doesn’t run out of it. Is that fair to say?

TOM: And then is an area below your house that’s slightly lower than the backyard?

NAOMI: After we bought the house, we found out it was built on a swamp, so everybody has drainage problems.

TOM: I’m pretty sure that you’re not looking at the water table there; you’re looking at some water that’s staying around. So here’s the solution to drain yard of standing water: it’s called a “curtain drain.”

And what a curtain drain is is a trench that you construct from the part where the water is ponding to somewhere lower than that in the elevation. Now, the curtain drain is a trench that’s about 12 inches wide and 12 inches deep. You put in a couple of inches of stone, then you put in a perforated PVC pipe. And then you put more stone and some filter cloth and you cover it with soil so it’s completely invisible when it’s done.

But here’s what happens: as the water runs down to that area where it’s ponding now, it falls into the trench, it comes up into the pipe and then it runs down through the pipe and discharges at a lower area of your property. So you are essentially collecting the water, shooting it around the house and then discharging it somewhere at a lower elevation.

NAOMI: Does this require a backhoe or is this something that we can do with shovel and …?

TOM: No, you can do it with a shovel. And you don’t need much pitch either: you need about a ¼-inch a foot – per foot – on the pipe. So just as long as you get a nice, clean trench dug, you get the stone in there, you get the perforated pipe in there, it’ll work very well. And it’ll drain yard of standing water whenever it fills up.

NAOMI: And I look for the wettest part of the yard to start it in and then I go to a – you said a ¼-inch per foot?

TOM: Foot, yeah. And you want to bring it down to someplace lower on the yard where you can discharge it. And the best thing to do is to discharge it to daylight; in other words, have the pipe actually pop out somewhere so the water can run out.

NAOMI: OK, great. Terrific. Thank you so much.

TOM: You’re welcome, Naomi. Thanks so much for calling us at 888-MONEY-PIT.